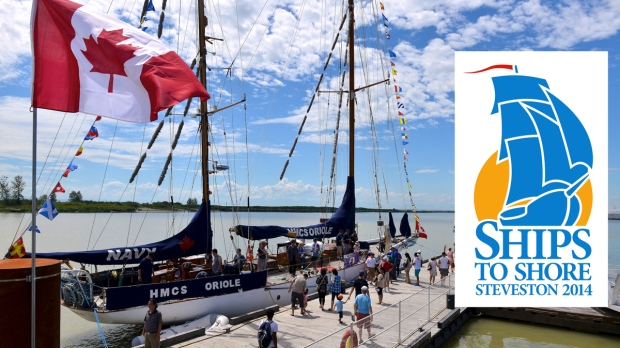 The Royal Canadian Navy will lead a flotilla of classic and working ships sailing and steaming their way to Richmond for Ships to Shore Steveston 2014 on the Canada Day weekend.

“We’re excited to have such a large presence from the Royal Canadian Navy for this year’s Ships to Shore festival,” said Richmond Mayor Malcolm Brodie. “It’s fitting to be celebrating Canada Day with many of the men and women who help keep our nation safe and secure.”

The Navy vessels, along with a dozen other unique and historic ships, will be available for free viewing and boarding throughout Ships to Shore Steveston from Sunday, June 29 to Tuesday, July 1. This year, the festival will be capped off with a special Canada Day fireworks show along the Steveston waterfront. The ships will be anchored at Steveston’s Imperial Landing and at

The HMCS Oriole is a 31-metre (102-foot) ketch first launched in 1921, and used by the Navy as a sail training vessel. Contrasting that will be the modern, Orca-class patrollers, barely a decade-old and measuring in at 33 metres (108-feet), which provide search and rescue and security along our coastline.

Also returning to the Ships to Shore fleet this year is the beautiful, century-old, 41-metre (133-foot) schoonerAdventuress, always a popular festival attraction, and a variety of other historic and working vessels the public can view and board.

Ships to Shore Steveston 2014 runs from 11 a.m. to 6 p.m. on June 29 and 30, and from noon to 6 p.m. on July 1. Ship boarding is free. The fireworks presentation will take place at 10:15 p.m. on Canada Day and will be viewable from anywhere along the Steveston Channel waterfront.

Steveston’s two national historic sites, the Britannia Shipyards and the Gulf of Georgia Cannery, will also be open throughout the Canada Day weekend. Drop by both to view great exhibits on the history of Canada’s west coast fishing industry and much more.

Parking in Steveston is limited and some road closures will be in place on Canada Day morning due to the Steveston Salmon Festival parade. Festival goers are encouraged to take transit, cycle or walk or take advantage of special festival shuttle service to avoid traffic and parking congestion. For more details visit www.richmond.ca/shipstoshore.

EXPLORE Vancouver via The Canada Line!