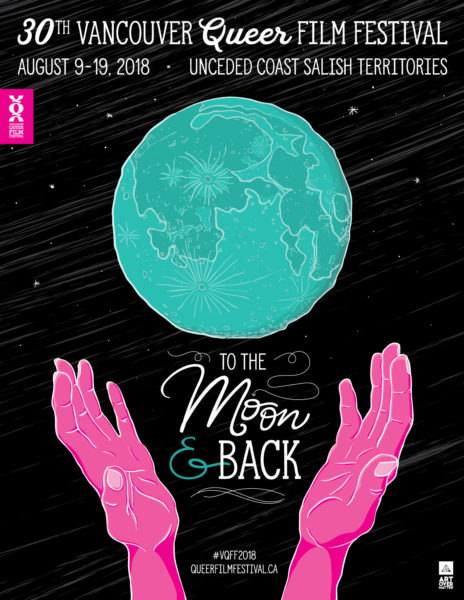 Out On Screen is proud to present the 30th annual Vancouver Queer Film Festival (VQFF) this summer from Thursday, August 9th to Sunday, August 19th. Welcoming its 30th anniversary presenting sponsor, RBC, this year’s Festival will take place at various theatres, including the Vancouver Playhouse, Cineplex Odeon International Village, SFU’s Goldcorp Centre for the Arts, VIFF Vancity Theatre, and the York Theatre. To celebrate its 30th anniversary, VQFF is pleased to announce a birthday party for the community on June 2nd at the Imperial along with its Festival theme “To the moon and back, 30 years of uplifting queer stories”.

“The value of queer film as a transformational art medium is just as critical today as it was 30 years ago,” says Executive Director Stephanie Goodwin. “The Festival is a place for the LGBT2Q+ community to call home as well as an important platform for films that queer the narrative, that illuminate and celebrate LGBT2Q+ lives in all their dimensions and complexity.”

Out On Screen turns 30 and is celebrating with a community birthday party, sponsored by Vancity, on Saturday, June 2nd at the Imperial at 8:00pm. A party for the LGBT2Q+ community and allies at the Imperial on Main Street will pay tribute to the last three decades of uplifting queer stories at the Vancouver Queer Film Festival. The Festival gets nostalgic and will be turning back time to dance the night away to hits from the 80’s, 90’s and 2000’s, and enjoy performances inspired by each decade from talented local artists Maiden China, Shay Dior, and Indigenous burlesque troupe Virago Nation.

“2018 has proven to be an incredible year for queer cinema, breaking out of familiar stories and into mainstream box office success,” adds Co-Artistic Director Anoushka Ratnarajah. “We are seeing queer filmmakers taking aesthetic and narrative risks, creating art that pushes boundaries, and takes audiences into new queer territories. I feel very fortunate to be witnessing the artistry, intelligence, and courage of queer film today.”

VQFF 2018 opens at the Vancouver Playhouse with the Canadian premiere of Yen Tan’s 1985, a critically-observed period piece brought to life by an acclaimed cast including Cory Michael Smith, Michael Chiklis, Virginia Madsen, and Jamie Chung. Adrian, a closeted young man, returns to his small Texas hometown to spend Christmas with his working-class Christian family. Under Tan’s emotional and poignant direction, 1985’s characters bring tension and a strained tenderness into every scene, creating a haunting elegy for a generation of gay men. Yen Tan will be joining the Festival to attend the Opening Gala and introduce his film.

The Festival’s Centrepiece Gala Film is the dramatic comedy White Rabbit co-written by and starring comedian Vivian Bang, who takes us on the often awkward and hilarious journey of a queer Korean American performance artist struggling to be heard and seen in modern Los Angeles.

The Vancouver Queer Film Festival celebrates B.C.’s most standout emerging and established filmmakers with Festival favourite The Coast is Queer – an evening dedicated to local talent. In addition, the Festival will be hosting its Troublemakers program again, which is an intergenerational filmmaking project that centers the stories of local queer elders and fosters the filmmaking talents of local queer youth.

Full details for the 2018 Vancouver Queer Film Festival will be made available soon.

Out On Screen is a charitable organization that illuminates, celebrates and advances queer lives through film, education and dialogue. The Vancouver Queer Film Festival creates a dynamic platform for queer cinema that reflects a diversity of experiences while connecting and strengthening our communities. The award-winning Out In Schools anti-bullying program brings age-appropriate queer cinema into secondary school classrooms to combat homophobia and transphobia. Out On Screen is proud to be among the leaders in Canada working to create an equitable society where sexual and gender diversity are embraced. www.outonscreen.com