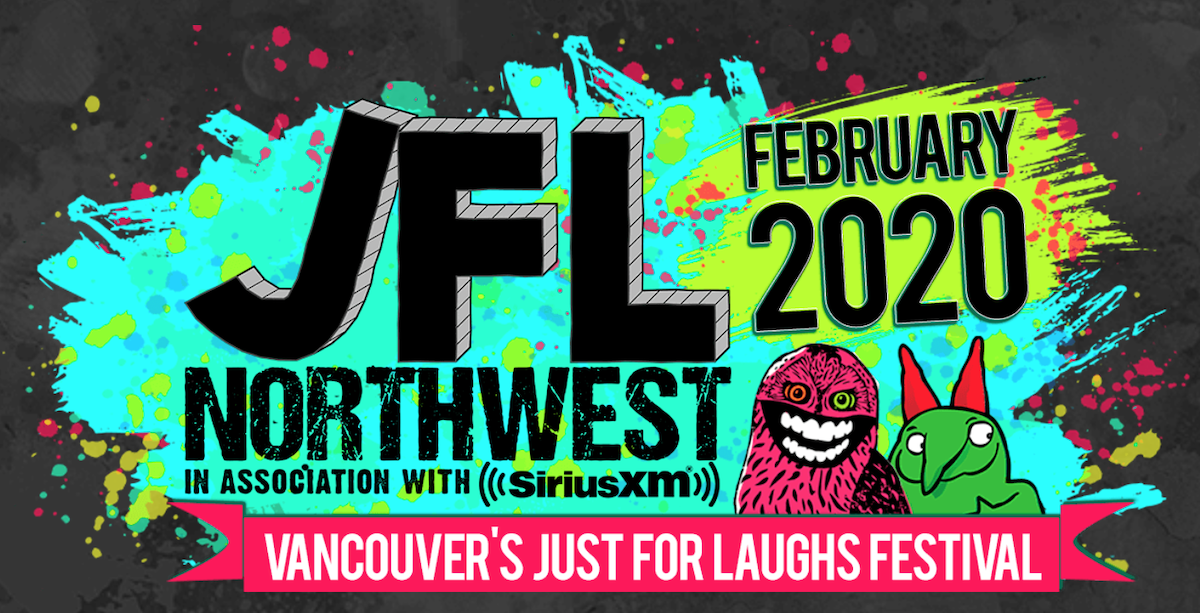 Back for its 5th edition this February, JFL NorthWest, presented in association with SiriusXM promises to deliver roaring laughs across Vancouver from February 13 through 25, 2020.

Best of the West, presented by SiriusXM, adds a show from

In addition to more stand-up shows being added to this year’s festival lineup, JFL NorthWest will be providing comedy lovers with intimate In Conversations featuring some of the festival’s biggest names. A unique opportunity to see some of today’s comedy stars up close and personal, these special In Conversations are always a festival highlight.

Performing at this year’s JFL NorthWest,

Drew Lynch captured the hearts of America with his Golden Buzzer performance on Season 10 of NBC’s America’s Got Talent, where he finished in second place. Since then, Drew has appeared on IFC’s Maron and CONAN, and amassed over 2 million subscribers on YouTube.

Award winning comedian Josh Thomas, the creator and star of Please Like Me (Netflix) and Everything’s Gonna Be Okay (ABC Spark) is coming to Vancouver with his brand new stand-up show, Whoopsie Daisy. Josh hates nothing more than being alone, even for a moment, so leaving his friends and moving to LA was an actual nightmare. It’s fine, he’s made friends in LA but now he is making sure that he has at least a couple of hundred people a night to talk to as he gets to know the rest of North America with his first new stand-up show in six years, Whoopsie Daisy.

Jacqueline Novak is a writer, performer and comedian who has appeared on many late-night shows including NBC’s Late Night with Seth Meyers, and The Tonight Show with Jimmy Fallon.  Her one-woman stand-up show, Get On Your Knees is a New York Times “Critics Pick,” identified among the “Best Theater of 2019” and extended three times in New York City.  Her memoir How to Weep in Public: Feeble Offerings on Depression from One Who Knows was released by Crown in 2016. She’s been named a “Comedy Central Comic to Watch” and was a previous “New Face” at the 2016 Just For Laughs Festival in Montreal. Her TV credits include appearances on HBO’s Animals andNetflix’s The Characters.

Jessica Kirson is a powerhouse on stage. Her countless comedic character videos have racked up over 30 million views on social media. In an era where only 10% of all touring comedians are female, Jessica stands out as one of the strongest comedians regardless of gender. Kirson has appeared in HBO’s Crashing, NBC’s The Tonight Show with Jimmy Fallon, and recently served as a consultant, producer, writer and actor in Robert De Niro’s film, The Comedian. Her first one-hour stand-up special, Bill Burr Presents: Jessica Kirson Talking To Myself, premiered on Comedy Central in December to rave reviews.

Matt Braunger has been professionally hilarious since 2007. The year after he won “Best of the Fest” at the Aspen Comedy Festival and has since produced two comedy specials: Shovel Fighteron Comedy Central and Big Dumb Animal on Netflix. You’ve seen him doing stand-up on TV on The Tonight Show, The Late Late Show, Conan, SXSW Comedy on Showtime, The Meltdown, and Live at Gotham to name just a few. No stranger to acting, Braunger has also played roles in Marvel’s Agent Carter, Bojack Horseman, The Michael J. Fox Show, Mad TV and many, many more. He recently taped a new hour special in Portland and can be heard weekly on his acclaimed podcast Ding-Donger with Matt Braunger.

Tim Dillon is a stand-up comedian, writer, and actor. Selected as a prestigious New Face at the 2016 Just For Laughs Festival, he went on to win the title of New York’s Funniest 2016 at Carolines NYC Comedy Festival; and in 2017, was named one of the ‘Top Ten comics you need to know’ by Rolling Stone magazine. In 2019, he debuted two TV specials, one a Comedy Central Half Hour and a Netflix Quarter hour. He has performed at the Oddball Comedy Festival, the Glasgow Comedy Festival, SXSW, among others. He hosts a Podcast called The Tim Dillon Show.

Joe “Mr. D” Dombrowski is an educator, comedian and influencer best known for his viral social content and most notably for his Spelling Bee prank video which captured the hearts of 20 million people and has been featured on Good Morning America, the Ellen DeGeneres Show, Pickler & Ben and BuzzFeed. Catch Joe in a city near you on his national comedy tour: Indoor Recess or download his podcast “Study Hall with Mr. D.” and prepare to be schooled!

Let’s Talk About These In Conversations!

Returning this year after receiving rave reviews from past festival attendees, JFL NorthWest is proud to host special In Conversation sessions with some of today’s top comedy stars as part of the Creator’s Series presented by Creative BC. Peeling back the curtain and giving audiences unprecedented access to their favourite content creators in comedy, these deeply personal and candid interview sessions allow comedy fans to learn more about some of the top names in the industry; how they got their start, how they continue to remain relevant, and what fans can expect to see next.

Artists participating in this year’s staple In Conversations series include:

Actor, comedian, writer, Ron Funches sits down every week to talk about his life, passions, hobbies, and how he is on a constant journey to better himself. This is Gettin’ Better with Ron Funches.

Due to overwhelming demand, additional performances have been added for some of the previously announced comedians on this year’s festival lineup.

Best of the West, presented by SiriusXM, adds a show from

Vancouver will be the place to be this February, as so many of today’s top names in comedy will be performing on stages across the city!

and so many more!

All tickets and passes for JFL NorthWest can be purchased at JFLNorthWest.com

JFL NorthWest pre-sale begins today at 10:00AM PT at JFLNorthWest.com

General public on sale begins on Friday, January 24 at 10:00AM PT at JFLNorthWest.com

Join us on social media #JFLNW2020