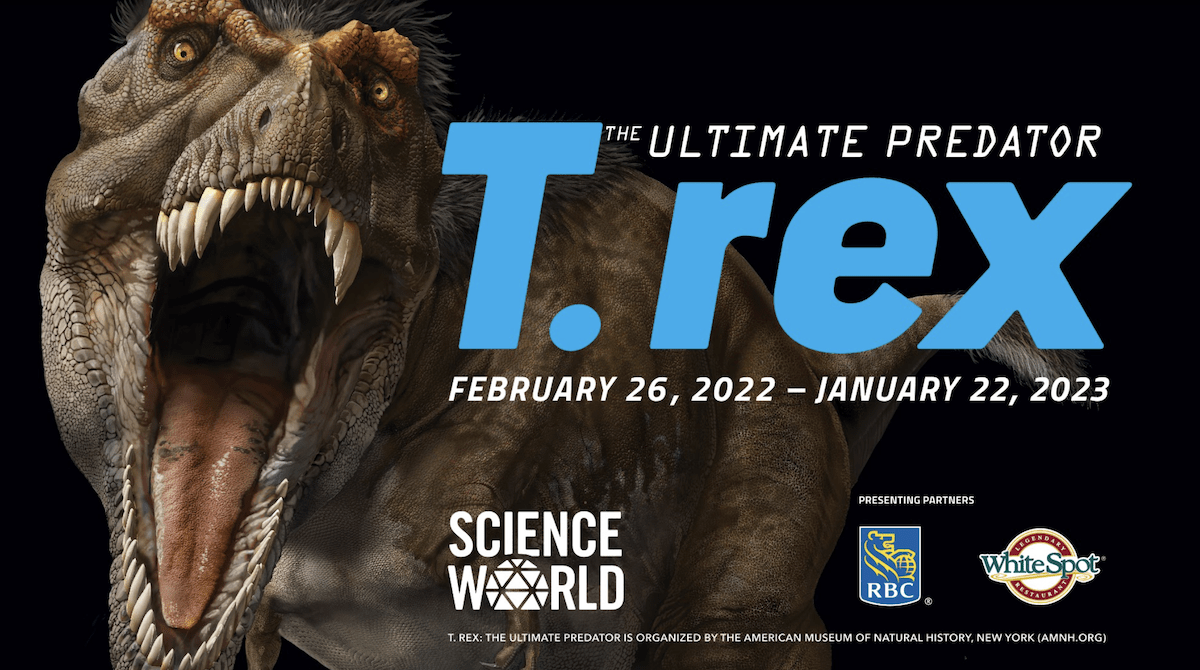 Everyone knows Tyrannosaurus rex. But did you know that T. rex hatchlings were fluffy and gangly, more like turkeys than the massive killing machines they grew up to be? Or that T. rex evolved from a large group of dinosaurs that were, for the most part, small, and fast? Or how about that the mega- predator had the rare ability to pulverize and partially digest bones? T. rex: The Ultimate Predator, presented by RBC and White Spot Restaurants, will be on display at Science World from February 26, 2022 until January, 22 2023, and will introduce you to the entire tyrannosaur family, revealing the amazing story of the most iconic dinosaur in the world through life-sized models, fossil casts, and engaging interactives.

Visitors to T. rex: The Ultimate Predator will encounter a massive life-sized model of a T. rex with patches of feathers—the definitive representation of this prehistoric predator. The exhibition will also include reconstructions of a T. rex hatchling and a four-year-old juvenile T. rex; a “roar mixer” where visitors can imagine what T. rex may have sounded like by blending sounds from other animals; a shadow theatre featuring a floor projection of an adult T. rex skeleton coming to life; and a life-sized animation of T. rex in a Cretaceous environment that responds to visitors’ movements.

This exhibition encourages visitors to engage in investigation with imagination and explore how the Tyrannosaurus rex may have looked and behaved over 66 million years ago. As visitors tour the gallery, they’ll examine the T. rex in all stages of its life, from a young, furry baby, to a massive, fully grown apex predator through its 100 million years of evolution. All the while, new technologies, ways of thinking and recent discoveries will encourage visitors to observe clues, ask questions and test new hypotheses, challenging what you thought you knew about these creatures. For example, “Was the T. rex the colour of a crocodile? Or could they have sported an attractive display of bright feathers like a bird?”

In this exhibition visitors can expect to engage with:

Life-size models of a number of tyrannosaurs, including: Proceratosaurus bradleyi
A cast fossil of a T. rex toe bone and a touchable cast of a T. rex thigh bone
A cast of the youngest and most complete juvenile tyrannosaur fossil found to date
A cast fossil of one of T. rex’s huge, banana-shaped teeth,
A tabletop “Investigation Station,” where visitors can explore a variety of fossil casts ranging from coprolite (fossilized feces) to a gigantic femur, with virtual tools including a CT scanner, measuring tape, and a microscope to learn more about what such specimens can reveal to scientists about the biology and behaviour of T. rex.
A full-scale reproduction of a T. rex fossil skeleton, the subject of the exhibition’s “shadow theatre,” in which the skeleton’s 40-foot shadow will “come to life” and demonstrate to visitors how the animal moved and interacted with prey and its own kind.
A praxinoscope that animates the difference between walking and running—T. rex could only truly run when it was young.

T. rex, The Ultimate Predator is on starting on February 26, 2022 and runs for one year. Ticket with admission, more information can be found at scienceworld.ca.

“I enjoyed taking my four kids to Science World when they were growing up and they were always very fascinated by the dinosaur exhibitions. These magnificent creatures inspire awe and wonder in people of all ages and transport our minds to a time long ago,” said Tracy Redies, Science World President and CEO. “We look forward to bringing T. rex, The Ultimate Predator to Science World so visitors can enjoy facts, visuals and engaging exhibits that will be sure to surprise and delight each person who walks through. There is still so much to learn from these wonderful creatures that walked the earth millions of years ago.”

“Investigation is an adventure of the imagination. Exploring how extinct dinosaurs may have looked and behaved at different stages of their lives is made by both investigating clues in fossils and inferential reasoning from observing animals alive today,” said Parker McLean, Curator at Science World. “T. rex is a pop-culture icon and most of us have preconceptions of how this creature looked and behaved. The continuing process of discovering more fossils and new ways to observe them has advanced our understanding of this magnificent creature’s life from youth into adulthood and we are excited for this to be presented in the exhibition.”

”Dinosaur fossils, like other echoes of ancient life, are discoveries of the science of paleontology. But dinosaurs have a special status that transcends their importance to science—they fascinate and inspire the masses like few other animals—living or extinct—can,” said Michael Novacek, the American Museum of Natural History’s senior advisor to the President, professor, and curator in the Division of Paleontology. “Chief among them is T. rex, perhaps the most famous and celebrated dinosaur that ever lived.”

“There’s nothing more fearsome, and fascinating, than the T. rex. When people walk through this exhibit, we think they are going to be able to imagine what it would be like to walk amongst the dinosaurs,” said Warren Erhart, President White Spot Restaurants. “We are so proud to be sponsoring this exhibit as we know it will be exciting, for the young and the young at heart, to learn all they can about the T. rex.”

“Advances in technology and recent discoveries have allowed scientists to uncover new information as it relates to dinosaurs, and in particular, the T. rex,” said Martin Thibodeau, Regional President, British Columbia – RBC. “RBC passionately supports the creation of the jobs of tomorrow, many of which will require skills in science, technology, engineering, arts & design and math. T. rex captures the attention of people young and old, and this exhibition will have you question what you thought you knew about creatures using a variety of scientific methods, ultimately fostering a continued love for the profession.”

New research shows that a T. rex could bite with about 7,800 pounds of force—equivalent to the weight of three cars.
Fully covered in feathers for warmth and camouflage, the juvenile T. rex had relatively long arms (unlike its adult counterparts), a slim body, and bladelike teeth that could cut through flesh but were not yet capable of crushing bone.
Brain casts indicate that T. rex had excellent vision. Its eyes, the size of oranges—some of the largest eyes of any land animal—faced forward like a hawk and were set wider apart than most other dinosaurs, giving it superior depth perception.
Many scientists think that T. rex hatchlings were probably covered in fuzz, like a duckling—but adults were mostly covered in scales, likely with patches of display feathers concentrated on attention-getting areas such as the head and tail.

Science World is a BC-based charitable organization that engages the people of British Columbia in STEAM literacy. Their mission is to ignite wonder and empower dreams through science and nature. Their vision is that within a generation, Canada will be a country of thriving, sustainable communities rooted in science, innovation and a deep connection to nature.

The American Museum of Natural History, founded in 1869, is one of the world’s preeminent scientific, educational, and cultural institutions. The Museum encompasses more than 40 permanent exhibition halls – including the Allison and Roberto Mignone Halls of Gems and Minerals which opened in 2021 – and those in the Rose Center for Earth and Space and the Hayden Planetarium, as well as galleries for temporary exhibitions. The Museum’s scientists draw on a world-class permanent collection of more than 34 million specimens and artifacts, some of which are billions of years old, and on one of the largest natural history libraries in the world. Through its Richard Gilder Graduate School, the Museum grants the Ph.D. degree in Comparative Biology and the Master of Arts in Teaching (MAT) degree, the only such freestanding, degree-granting program at any museum in the United States. The Museum’s website, digital videos and apps for mobile devices collections, exhibitions, and educational programs to millions around the world. Visit amnh.org for more information.

Media release and image provided by Larissa Dundon, The Tea.