premieres at the Richmond Cultural Centre

Ga Ting (Family)—a theatrical play featuring a complex cultural and inter-generational exploration on themes of family, love, and mortality—will premiere at the Richmond Cultural Centre’s Performance Hall with a preview on March 20 and 21 and an opening night on March 22 until the March 30. 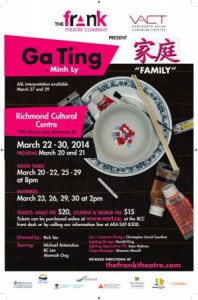 Ga Ting means family in Cantonese. The play weaves a powerful story about an immigrant Chinese couple trying to come to terms with the death of their son, Kevin. They invite Kevin’s Caucasian boyfriend for dinner after the funeral and, for the first time, not only acknowledge that their son was gay, but who he truly was as a person. As the characters share memories of Kevin, their dinner conversation eventually evolves into a cultural and generational clash.

“In Chinese culture, among others, being gay is a topic that many do not want to discuss or even acknowledge,” Canadian playwright and actor Minh Ly explains. “I hope that Ga Ting will spark an important dialogue among families. Parents and children need to realize how important it is to communicate with each other and to support each other, before regret sets in.”

Ga Ting marks Minh Ly’s debut as a playwright. The play would not be possible without the support of:

The new full-length production is presented by Vancouver Asian Canadian Theatre (www.vact.ca) and the frank theatre company (www.thefranktheatre.com). It will be performed in English and Cantonese with English and Chinese surtitles. Ga Ting will lead two talk-back sessions on March 25 and 26. There will also be American Sign Language (ASL) interpretation for two performances.

The production is supported by the City of Richmond’s Arts Services and the Richmond Multicultural Community Services.

Exploring the journey of becoming a Woman

8 more days : Be ready for the eclectic collection of extreme hypercars and luxury brands | September 9 & 10, 2017