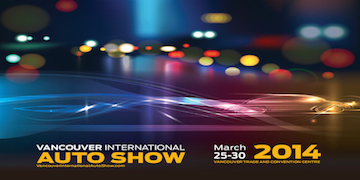 The 2014 Vancouver International Auto Show is opening its doors to car enthusiasts from all over the province. From noon today until Sunday, March 30, British Columbia’s premier annual automotive event will give visitors the opportunity to see over 400 vehicles from 22 manufacturers and experience the latest in automotive art, design, and technology.

Auto buffs will get to check out an incredible range of vehicles, including the 1950s and ‘60s collector cars lined up at Hagerty Classic Alley; the impressive McLarens, Lamborghinis, and Bentleys in the Exotics display; and the unbelievable custom rides from 360 Fabrications. The Green Ride and Drive will not only showcase some of the industry’s best environmentally friendly vehicles, but will also allow visitors to take them out for a spin.

For the first time in Auto Show history, there will be a live auction held right on the tradeshow floor. On Saturday, March 29 at 2:00 pm, a 1966 Mustang Coupe will be auctioned off in front of the Red Line Stage. Net proceeds from the sale will be donated to the New Car Dealers Foundation, who offers scholarships for an education in automotive sales and supports community organizations.

Other specialty features include driving simulators from Ford, Subaru, and ICBC; the Red Line Stage, with special guest speakers and events; and the Volkswagen Playcare Centre for kids.