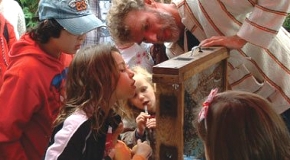 Vancouver is home to over a dozen individual, but connected, Neighbourhood Food Networks that have a unique role to play in the food movement. Thursday January 22, these networks hosted two events back to back to meet with current and potential funders, partners, and media.

Forty-six registrants made up of government, credit unions and banks, foundations, big grocery chains, local businesses, and others attended Funder Nourished: Setting a Plate for Vancouver Neighbourhood Food Networks where they were nourished by sustainable, local food generously provided by Whole Foods Market. With Peter Ladner, author of The Urban Food Revolution (2011), as MC, a panel of Neighbourhood Food Network coordinators talked about moving away from charity models of food giving to approaches that support dignity, social justice, and community building.

This work can include hosting nutritional tours of supermarkets, creating mobile produce markets in areas lacking in fresh food options, guiding community kitchens to cook healthy food together, creating food scrap depots to reduce the amount of food scraps wasted, facilitating intergenerational cooking classes with children and seniors, and so much more. “It’s all about community and bringing people together to nourish themselves and their neighbours,” says Zsuzsi Fodor, the Networks’ Coordinator. With so much great food work already happening in the city’s neighbourhoods, one of the most important roles of the networks is to weave together the people doing it for an even greater impact and maximization of often scarce resources.

Grandview Woodland Food Connection Coordinator, Ian Marcuse, explained how relationships have been cultivated between teenagers and other community residents in his neighbourhood in a program called ‘Off the Grill’ where three times each week they cook and eat together. “It’s a collaborative program supported by Drug & Alcohol workers, Children’s Hospital, and the Neighbourhood Food Network that brings people together who might not otherwise have ever met. Food is a powerful relationship-building tool,” Marcuse adds.

For more information about their work, visit www.vancouverfoodnetworks.com

Slurpee Name Your Price Day! 7-Eleven Customers Can Pay What They Want for a Slurpee