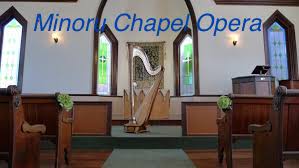 We are offering two pairs of tickets for each performance. Here are the details of how to enter:
Leave a comment on our Facebook page telling us why you would like to win and using the has tag #MinoruChapelOpera
Follow us on Facebook.
For a bonus entry follow @myvancity and @Richmond_BC and RT using #MinoruChapelOpera

On the first Wednesdays in March, April and May audiences have the opportunity to hear selections from classic operas masterfully performed in an intimate and historic setting, a place that is typically enjoyed only by wedding guests and movie crews.

Opera Mariposa is proud to make their Minoru Chapel debut with a costumed concert of sumptuous operatic highlights, featuring songs and scenes from Carmen, La bohème, Don Giovanni, The Magic Flute, The Marriage of Figaro and many more. Join multi-award-winning sopranos Jacqueline Ko and Robin Eder-Warren with acclaimed baritone Jason Cook as they bring to life some of opera’s most unforgettable moments.

Opera Mariposa is a critically acclaimed opera company run by young artists, for young artists. Now in their third season, the Vancouver-based company is dedicated to creating a stage for emerging talent, showcasing North America’s most promising performers in a diverse program of gala concerts, original shows and fully staged opera productions. The Vancouver Project recently declared that “Opera Mariposa stands at the forefront of Vancouver’s opera scene,” and Mariposa’s productions have been hailed as “priceless” (Opera Canada) and “a stroke of genius” (The Voice) for their ability to engage both dedicated opera lovers and new audiences.

Porgy and Bess and beyond. Great arias, songs and duets by Gershwin, Porter and Kern; here are your favourites in a single concert.

With two of City Opera Vancouver’s most glamorous and accomplished singers — soprano Michelle Keobke and baritone Ed Moran — host and narrator Tom Durrie will guide audiences through an unforgettable evening of unforgettable music!

City Opera Vancouver is a professional chamber company that tells wonderful stories in small forms. In May 2014, they presented the world premiere of Pauline, the first opera by Margaret Atwood, with music by Tobin Stokes. It sold out all five nights. Previous productions include Fallujah, Sumidagawa & Curlew River, The Emperor of Atlantis, Carmina Burana, and over 40 concerts and recitals. In 2016 City Opera Vancouver will present The Lost Operas of Mozart, three works that the great composer began but never finished. In 2017, their next commission is Missing Women, which will tell a story everyone knows, from the perspective of a woman no one remembers.

This beloved classic explores society and morality through the passionate love and tragic death of the beautiful, but fragile, courtesan Violetta, who sacrifices her one hope for happiness for her lover’s reputation.

You will hear this glorious music sung by five of British Columbia’s superb young opera singers — featuring soprano Gina McLellan Morel as Violetta and tenor Brian Lee as Alfredo — under the musical direction of David Boothroyd.

Burnaby Lyric Opera began in the early 1980’s and by 1997 had evolved into a professional company with its permanent home in the Shadbolt Centre for the Arts in Burnaby. For its innovative productions and high performance standards, BLO has received praise and critical acclaim, not only from local newspaper critics, but the high-profile magazine, Opera Canada. The company is a non-profit society with a vision to give emerging professional and semi-professional opera singers in British Columbia the opportunity to sing leading roles in fully-staged operas.

Find out more at burnabylyricopera.org

2 thoughts on “CONTEST – CHAPEL IN THE PARK Minoru Chapel Opera”