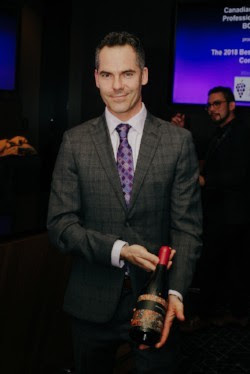 In a recent cover story in Vancouver Magazine’s January/February issue, Ian is described as one of the city’s new guard of sommeliers and the ‘wine architect’ due to his earlier studies at Carleton University before being smitten by the world of wine. This ambition is truly a case of passion conquering all.

“In many ways, Ian embodies a seasoned sommelier who builds a relationship with his dining guests to select wines based upon their preferences and the nuances of winemaking,” says Blue Water Cafe’s Wine Director William Mulholland. “We’re delighted to have Ian as part of such a strong team to pair vintages from around the world with Executive Chef Frank Pabst’s stellar cooking.”

As a not-for-profit organization, CAPS aims to promote and educate the sommelier profession through professional development and networking events related to the wine and spirits industry. Visit sommelierscanada.com

The Best Sommelier of Canada, 2017 is Carl Villeneuve-Lepage