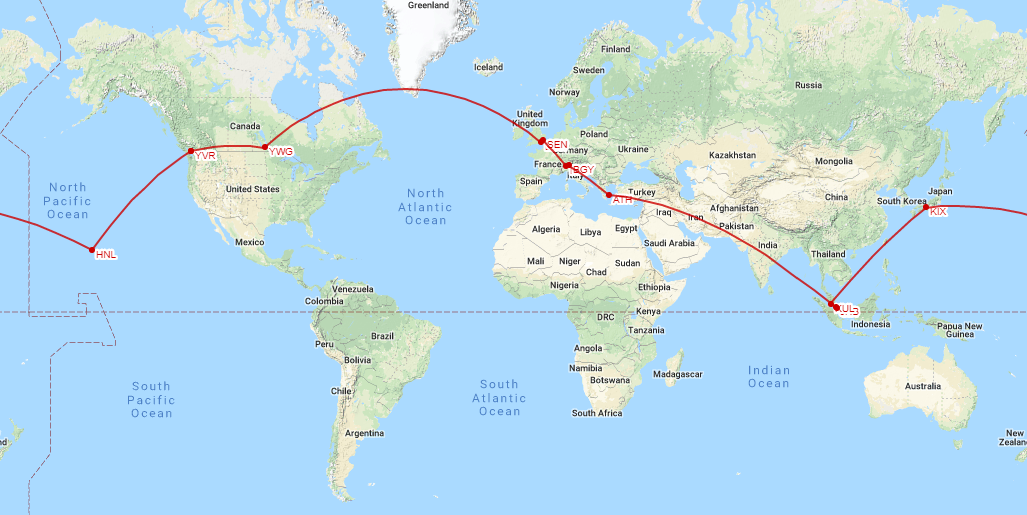 At Flytrippers, every day we curate great flight deals… and give you great tips on this blog. Usually, our deals are pretty straightforward: heavily discounted roundtrips to a specific destination (just one at a time). But we also regularly build amazing around the world itineraries every now and then, for those who want an epic adventure!

Usually, these itineraries from Vancouver are around $1,400 but this time we wanted to find dates during the summer vacations, when almost everyone can take some time off… so it’s a bit more expensive. But even at $1,494 it isn’t that much more than what most people will pay in the summer for a boring flight to only one destination.

So here is our flight deals mashup that gives you an itinerary to go all around the world for $1,494 if you can travel light. By the way, it isn’t that much harder to travel light for 5 weeks compared to 1 week… you just need to get used to it (and do some laundry). We’ve done it ourselves for month-long trips, you can definitely do it too. Remember that doing some laundry will cost you about $5 but plane tickets with baggage included will literally cost you hundreds of dollars more… you do the math!

The funny thing (or the sad thing) is that a lot of people don’t know about flight deals and will pay that same price just to go to Asia (or even worse, to go to Europe). We help you see four continents for the same price (including both Europe and Asia, of course). Some people even paid the same price for an iPhone that will be outdated in a year.

Traveling really doesn’t have to be expensive if you don’t want it to be (and if you know how to) and that’s exactly what our mission is at Flytrippers: help Canadians travel more, for less, thanks to our dozen daily flight deals from your city… and our tips on this blog!

How Does It Work?

Read on for all the details but essentially, we’ve combined great one-way deals from all over to help you accomplish what very few people can do: go all around the world in one exceptional trip!

The itinerary below is for those who have about 5 weeks to go and explore, so it is pretty intense. But we want to be the flight deal website for people like you, who (unfortunately) don’t have unlimited vacation time.

However, if you want to stay longer, it is quite possible by manually playing around with those dates. Often the price will be quite similar, if you act fast of course (although in the summer, cheap dates are harder to find).

One thing is for sure, if you want to spend the entire summer traveling, that’s easy. Just change the return flights by locating the cheapest dates with these instructions, the return will likely be the same price at the end of summer (or even cheaper). If you can leave earlier, your trip will be even cheaper with an early June departure. And if you do extend the itinerary, make sure you spend as much time as possible in Southeast Asia, one of the cheapest places to travel in the entire world.

The takeaway from all this is that plane tickets have never been cheaper in the history of air travel (and 2018 will be even cheaper than 2017). All you need to do is find those cheap airfares. We do it for you every single day from 9 Canadian departure cities with our curated deals, but you can always use our advanced search tool to find specific tickets if you are willing to invest a bit of time.

If you want to buy this round-the-world trip, make sure you book very quickly because these deals won’t last forever and flight segment prices will change. Like all flight deals, prices for specific dates always expire quickly so hurry up!

The basic rule for multi-ticket itineraries is to book the longest and most expensive segments first (ocean crossings usually), as those are the ones whose prices you want to lock in quickly. If the $29 flight changes to $39 in the meantime well, so be it.

Where This Around-The-World Trip Will Take You

You will fly to London (United Kingdom), Milan (Italy), Athens (Greece), Singapore (Singapore), Kuala Lumpur (Malaysia) and Honolulu (Hawaii). You will have visited four continents: Europe, Asia, Oceania (Hawaii) and of course North America. You can see photos of these destinations at the end of the article. You will also have layovers in Winnipeg and Osaka (Japan).

Some of these flight segments are on Ultra Low-Cost Carriers (ULCCs), so pack light and instead bring back amazing memories of a unique trip that will make you part of the very select group of people to have experienced going all around the world in one trip! By the way, Flytrippers’ co-founder Kevin traveled for many months with just a ULCC-sized bag, so you can definitely do it for a month and experience an epic trip without breaking the bank.

Know someone who should come with you on an epic summer trip? Use the sharing buttons at the bottom (mobile) or on the left (desktop) to share this article with them!

Flight on WestJet (with a layover in Winnipeg)

In about five weeks, you’ll have been to 8 countries… and all around the globe: United Kingdom, Italy, Greece, Singapore, Malaysia, Japan, the United States and Canada. Here are some photos of the destinations to tempt you even more.

This is for the around-the-world trip from VANCOUVER. See itineraries leaving from Toronto, from Ottawa,  from Montreal, from Halifax, from Calgary, from Edmonton, from Winnipeg or from Quebec City.

READ ALSO: Which Summer Weeks To Choose For Your Vacation To Travel and Save Money

Summer dining with Quails’ Gate Dinner in the Vineyard series