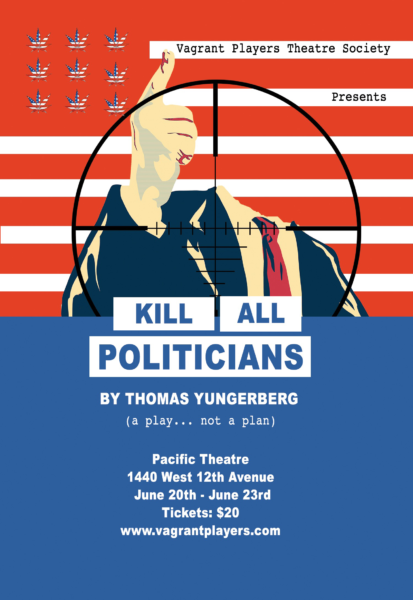 The Canadian premiere of “Kill All Politicians”, is billed as ‘a comedy about the politics of friendship’. Sometimes, however, it is anything but comedic, as the action opens with Stu (Brad Bergeron) beginning an extended rant after receiving a parking ticket. He and his roommate, Ben (Carson Bokenfohr), who had been listening to an endless political commentary on CSPAN, share a bong while discussing what they see as the moral depravity of all politicians. Stu repeats Edmund Burke’s famous quotation: “the only thing necessary for the triumph of evil is for good men to do nothing” and decides that they should stand by what they believe and kill the politicians.

Their friend Cleo (Julia Lank) is contacted to help them write their manifesto by providing Dexedrine. Gun Guy Glenn (Arthur MacKinnon) agrees to lend his gun, Stu’s sister Kristen (Megan Peta Hill) accuses Stu of being captivated by problems he has made up about himself and Brian (Arthur MacKinnon) tries not to hand over the security key they are demanding. An infusion of cocaine fuels an increasing chaos which ends with Stu finding himself alone in the apartment. There is a crisis and a next day, where, perhaps, lessons are learned and relationships restored.

“Kill All Politicians” explores a number of issues. Why can people be so easily persuaded to become fanatic proponents of a cause? What is the nature of hypocrisy: are those who are out working for ‘the man’ the only hypocrites, or are those who do nothing but rant against them equally guilty? When must people take a stand and what should that look like? At what point does friendship become so toxic that it has to be re-evaluated and, perhaps, ended?

The very short run of this play has ended, but the talented actors, director (Cody Kearsley) and back stage members of the Vagrant Players Theatre Society are well worth watching.