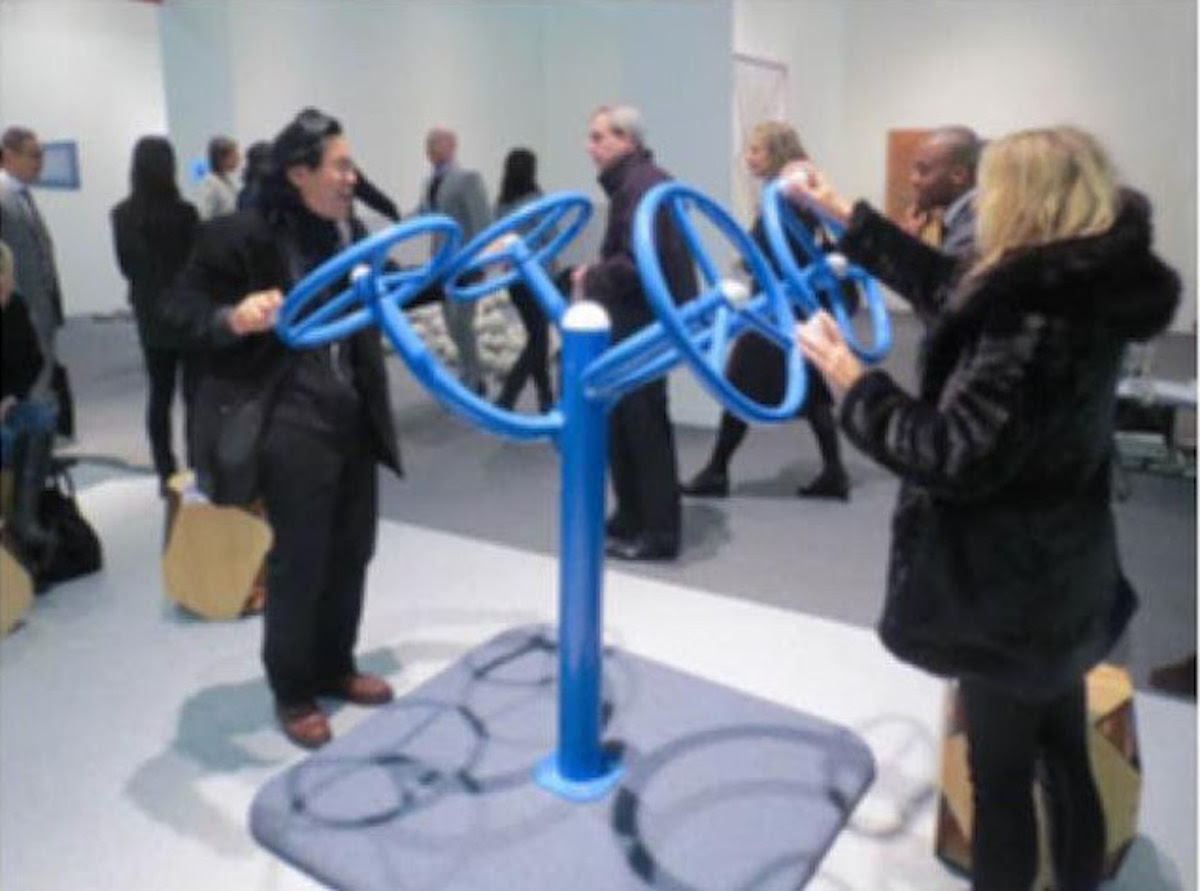 The five-member PFSO collective will produce a five-piece set of exercise equipment specially designed for the Vancouver public, which will appear against the vinyl text proclamation, “We” is the Distinction of “I” featured on a back wall. The artists’ decree suggests that establishing a more collective self-awareness fosters inclusivity and collaboration within a community.

The title Fitness for All (Vancouver) alludes to a Chinese slogan encouraging physical exercise among citizens. It serves as the starting point for PFSO’s installation at Offsite, which appropriates the publicly funded workout equipment found in city squares and residential compounds throughout China. Treating the work as sculpture for the betterment of visitors and passersby, PSFO explores the possibilities of shared experience through group activities such as fitness.

“Vancouver is widely known as a city with an active, health-conscious community, but for many, exercise is an activity spent alone,” says Kathleen S. Bartels, Director of the Vancouver Art Gallery. “Presenting a version of Fitness for All in Vancouver, Polit-Sheer-Form Office invites the public to consider perspectives of collectivity and individuality through the action of working out together. This installation is a symbol for the importance of shared experiences in supporting a community’s well-being.”

Polit-Sheer-Form Office was founded in 2005 by artists Hong Hao, Xiao Yu, Song Dong, Liu Jianhua, and curator/critic Leng Lin. The group’s multi-disciplinary projects address the idea of “we” in a “me” world. Their activities of talking, traveling, eating, reading, and playing together form the basis of their commentary on political, cultural, and spiritual life in twenty-first century China.

Born in the 1960s and coming of age during China’s period of Culture Revolution (1964–1974), the artists represent a generation that bore witness to China’s shift from a nation upholding Communism as both its economic and political order, to one of capitalist ideals and Communist governance.

United by the nostalgia and memories of communal gatherings, PSFO’s declared moto is to “seek the collective form” and propose a new socialism for the twenty-first century that bridges the gap between latent collective ideology with individualistic social reality through art.

Offsite: Polit-Sheer-Form-Office is organized by the Vancouver Art Gallery, an initiative of the Institute of Asian Art, and curated by Diana Freundl, Associate Curator, Asian Art.

Offsite is the Vancouver Art Gallery’s outdoor public art space located at 1100 West Georgia Street between Thurlow and Bute Streets, west of the Shangri-La Hotel, in downtown Vancouver. Presenting an innovative program of temporary projects, it is a site for local and international contemporary artists to exhibit works related to the surrounding urban context. Featured artists consider the site-specific potential of art within the public realm and respond to the changing social and cultural conditions of our contemporary world. New projects are installed in the spring and fall. Offsite: Polit-Sheer-Form Office is the 18th Offsite installation of this series.

Offsite is funded by the City of Vancouver through the Public Art Program. The Gallery recognizes Ian Gillespie, President, Westbank; Ben Yeung, President, Peterson Investment Group; and the residents of the Shangri-La for their support of this space.

A program of the Vancouver Art Gallery, an initiative of the Institute of Asian Art.

About the Vancouver Art Gallery (vanartgallery.bc.ca)
Founded in 1931, the Vancouver Art Gallery is recognized as one of North America’s most respected and innovative visual arts institutions. The Gallery’s ground-breaking exhibitions, extensive public programs, and emphasis on advancing scholarship all focus on historical and contemporary art from British Columbia and around the world. Special attention is paid to the accomplishments of Indigenous artists, as well as to the arts of the Asia Pacific region—through the Institute of Asian Art that the Gallery founded in 2014. The Gallery’s programs also explore the impacts of images in the larger sphere of visual culture, design and architecture.

The Vancouver Art Gallery is a not-for-profit organization supported by its members, individual donors, corporate funders, foundations, the City of Vancouver, the Province of British Columbia through the BC Arts Council, and the Canada Council for the Arts.

The Vancouver Art Gallery is situated on traditional, ancestral, and unceded territory of the xʷməθkʷəy̓əm (Musqueam), Sḵwx̱wú7mesh (Squamish), and səl̓ilwətaɁɬ (Tsleil-waututh) peoples, and is respectful of the Indigenous stewards of the land it occupies, whose rich cultures are fundamental to artistic life in Vancouver and to the work of the Gallery.

About the Vancouver Art Gallery’s Institute of Asian Art

Responding to the city’s geographic location on the eastern edge of the Pacific Rim, the Vancouver Art Gallery has been committed to presenting contemporary art of the Asia Pacific region for more than two decades. Launched in 2014, the Gallery’s Institute of Asian Art (IAA) is a comprehensive initiative committed to advancing scholarship and public appreciation of Asian art.

Image: Polit-Sheer-Form Office, Fitness for All!, 2014 (installation view at The Armory Show, New York, 2014), Courtesy of the Artists