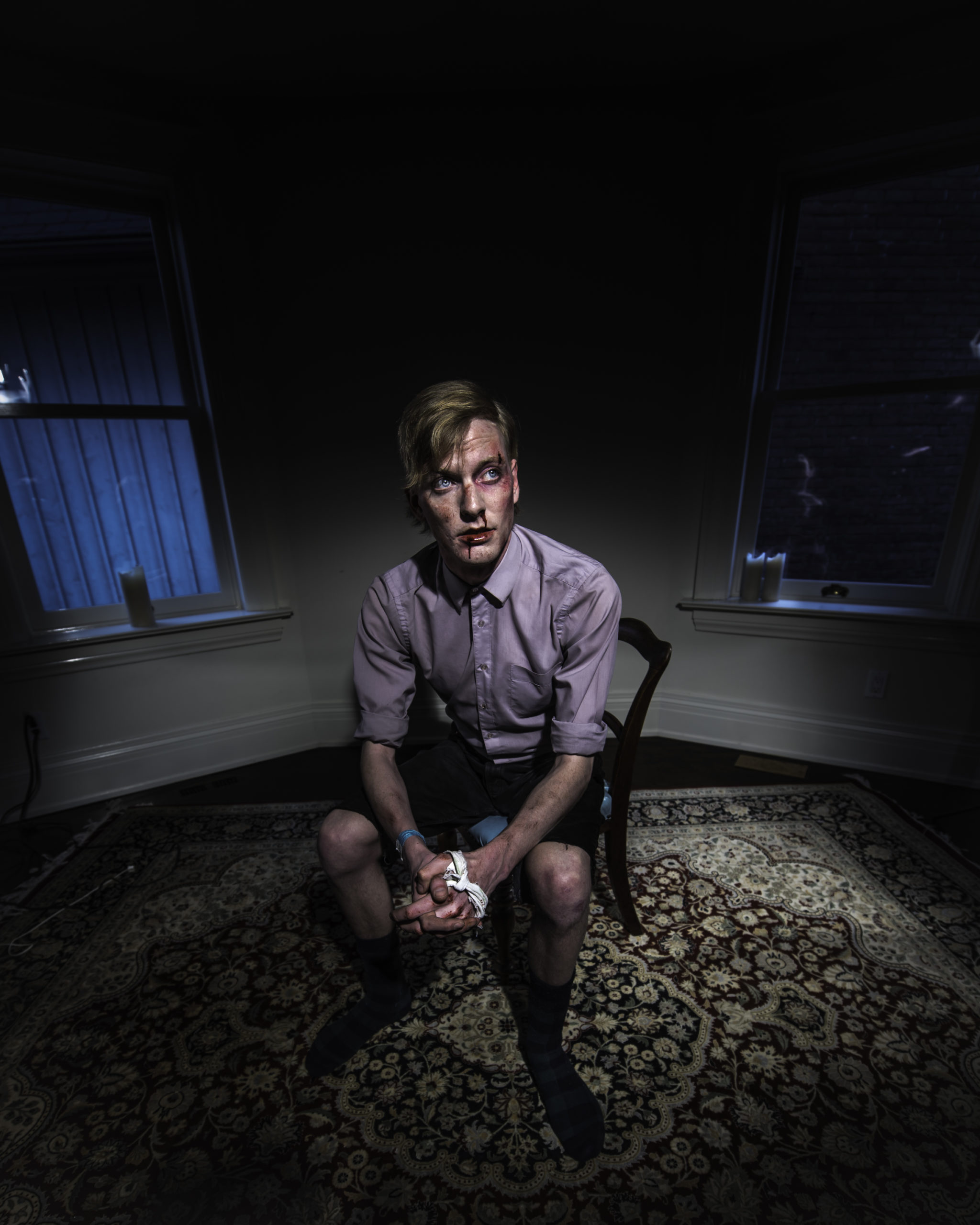 Let’s pretend for a second that we’re OK. What might that feel like? A lot of things are not OK with Thomas, but he’s got a ten-pound sledge hammer and is pretty sure that he could use it to solve at least one of his problems.

This is a show that he wrote for those times when you can’t get out of bed – when you’ve only been eating breakfast cereal for days.

Called “dark, vulnerable and beautiful” by Theatre Reader and “quite possibly the most honest piece of theatre I saw all year” by Jill Harper of Intermission Magazine Toronto (Top shows of 2016), 41⁄2 (ig)noble truths is McKechnie’s deeply personal attempt to articulate his experience living with clinical depression. Initially framed as a matter-of-fact lecture, when this method falls short, he uses objects, poetry, sound and action to offer 4 1⁄2 totally useful pieces of advice for battling depression.

“41⁄2 (ig)noble truths is moving, intelligent, funny, helpful and goddamn brave; you need to see it.” – My Entertainment World

41⁄2 (ig)noble truths is a one-man show written and performed by Toronto-based performer, playwright & activist Thomas McKechnie. McKechnie was a member of the 2013-2015 Soulpepper Academy as a playwright. Writing credits include: The Thirst of Hearts (Soulpepper), Valkyrie (Rarely Pure Theatre, Toronto Fringe), …and the aeroplanes fall into the sea. Collective: A Wake for Lost Time, there/GONE, A Kitchen Sink Drama ([elephants] collective), Tell Me What It’s Called (Tell Me What It’s Called Collective), A Good Man is Hard to Find (Soulpepper Academy).

The piece is part of the Pi Provocateurs 2019 Presentation Series. This series brings artists from British Columbia and around the country to Vancouver. It’s all about bringing the community together with provocative performers in unconventional or underutilized spaces. Past Provocateurs performances include Pearle Harbour’s Chautauqua and After Party Theatre’s Lady Parts.

Pi Theatre produces and presents bold and uncompromising plays that explore modern life, connecting audiences with theatre that is intellectually alive and emotionally charged. They are constant innovators whose experiments with form and format have rendered some of Vancouver’s most memorable and risk-taking experiences. The company’s recent productions include Hir, The Events, Long Division, The Invisible Hand (nominated for eight Jessie Awards and Blasted (also nominated for eight Jessies).

zeitpunktheatre is a Toronto-based experimental theatre company. The work is political, punk-inspired, and grounded in the present moment. The company’s first production, 4 1/2 (ig)noble truths, premiered in Toronto at the Summerworks Festival in 2016. Since, it has had two more Toronto productions as well as tour stops in Victoria, Thunder Bay, St. Catherines, and Halifax. Upcoming, zeitpunktheatre will produce Remembering the Winnipeg General, a Brechtian vaudeville, to celebrate the 100th anniversary of the Winnipeg General Strike. Other readings and productions of the play will occur in Halifax, Montreal, Ottawa, and Vancouver.

About Why Not Theatre (theatrewhynot.org)

Led by a core team of Founding Artistic Director Ravi Jain, Managing Director Owais Lightwala, and Executive Producer Kelly Read, Why Not Theatre is an agile, international theatre company based in Toronto, Canada, rooted in the values of innovation, community, and collaboration. Their work is inventive, cross-cultural, and reflects our passion for the exploration of difference.

In association with Why Not Theatre

Talkbacks after each performance

C’MON ANGIE! at Firehall Arts Centre until June 9 a review by Judy Robb