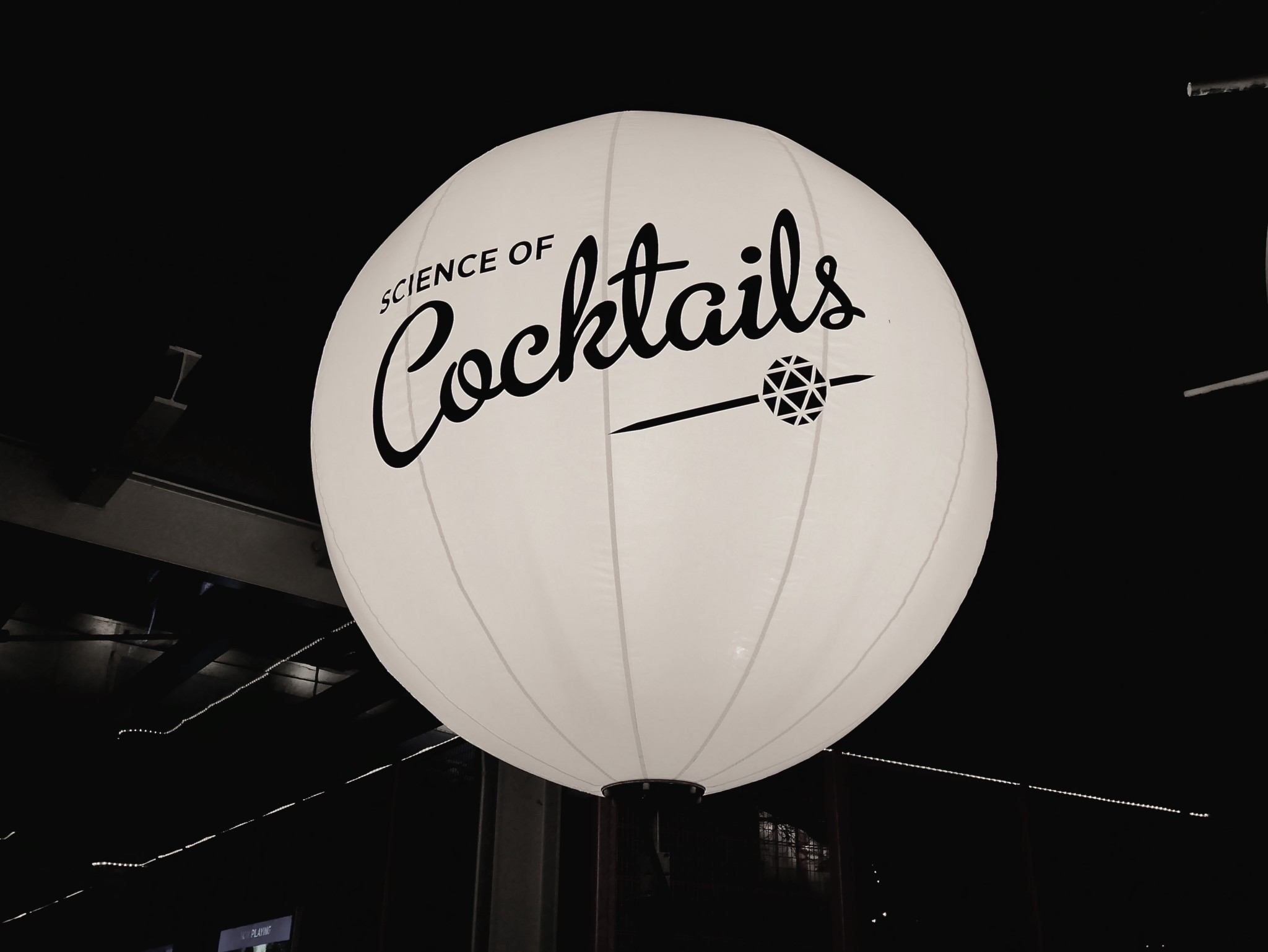 The funding from this year’s event will help send over 9,000 kids from underserved schools on field trips to Science World in 2020/2021

Now that the results are in, and aren’t they fantastic, it’s time to reflect on the event that was and what the success means to thousands of school children.

Just prior to the opening of the Science of Cocktails 2020 I had the opportunity to speak first to Kate Henderson, School Engagement Manager.

What do you do here at Science World?

I make sure that all of our programs and offerings for schools both here at Telus World of Science and around the Province meets the needs of students and teachers; and that includes the Bursary Program.

How does Telus World of Science fit with Science of Cocktails event?

This event, Science of Cocktails, all of the proceeds to towards the Class Field Trip Bursary Program. We provide bursaries for under served students to visit Science World as part of a field trip. They come in, usually two classes at a time, from schools mostly across Metro Vancouver regions. We also provide transportation in the form of reimbursement for bus or Translink tickets.

What determines which of the schools get to come to  Science World on the program?

The needs are very different for different schools so we do reach schools within Vancouver who wouldn’t otherwise be able to come here on a field trip. We also reach a lot of schools in  Surrey. We have learned that when schools have to cross a bridge it means more time and that costs a lot more money. We support schools that come from Maple Ridge, Chilliwack, Mission and it’s really exciting because those students ultimately wouldn’t come here on a school trip because of the financial burden.

We work with school districts to identify the best schools that have the need to be receiving financial support.

Does Science World have a mobile science program?

We do, the Science World on the Road Program visits schools outside of the Metro Vancouver region. We know that schools that are within the vicinity and use the bursary program are more likely to come to our facilities. They can visit the galleries and they can do school workshops. They might be interested in watching a show at the stage and coming here really keeps a lot of wonder and sparks curiousity for those students.

We do have programs that reach students from around the whole province but this program in particular targets schools that are local.

How many kids come in a group?

We have probably about 45 students, maybe up to 50 per bursary. We do that because it is pretty normal for primary groups to come as two classes together, either with a buddy class or just a lot of school buses fit two classes so that is a fairly straight forward model for us to figure out.

Is that the number of students you would have at one time at Science World?

Since Lego opened we’ve been very busy the last week. We will have as many as twelve schools coming on a day and maybe a couple of hundred students in the building, it’s exciting. Our staff is busy and the galleries are busy the overall feeling in the building when we’re full of schools is fantastic. This is what we do from September until June.

What ages are the students who come to Science World?

We do have field trips for kindergarten all the way up to Grade 12.

Later I had the opportunty to speak to Interim CEO Janet Wood. 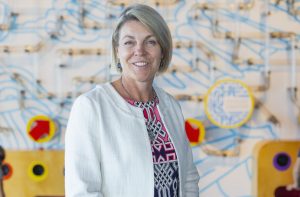 I had my whole career in tech and I just retired in April from SAP. When the former CEO announced he was leaving the Board reached out to me knowing I was retired, and thinking I was looking for something to do, which I wasn’t, but I just got so excited about Science World’s mission and the team so I was really compelled to join while they searched for a new global CEO.

I’d been here and we’ve got grandkids but I had never worked in not for profit. There are 230 employees full time and half time and a couple of hundred volunteers.

Now we have the Lego exhibit open and I was here the other day walking around and there were kids playing and there was a grandmother sitting in one of the little Barcelona chairs fast asleep. The kids were about two feet away and you could tell she was like just ahhh. The kids are so engaged they aren’t running around, they are right there. It’s a wonderful place.

Do you know what our mission is? Ignite, wonder, and empower dreams. I have never worked anywhere that had such a compelling vision.

Four out of the five VP’s are woman, a number of the Directors are women. From a diverse perspective it is a great organization.

As you know in general girls tend to drop out of science as they get older and so we actually have a lot of initiatives to try to turn that around. We have girls in STEAM*, we had our second annual STEAM a few months ago. Close to 300 girls come in and we got mentors for them, we had a key note speaker. There is workshops, there’s tech, really making science fun and exciting. That program sells out in about five minutes once we put it online all the spaces are gone. We designate some of the spaces to an organization to make sure that girls from underserved communities can come and join. We have a focus on girls as well. We also just had an indigenous girls STEAM* in the last few weeks. We are trying to really do everything we can to ensure that girls will understand that science can be fun and it’s also important part of your life, whether it’s your career, or understanding climate change, food safety and like everyone we just want to make sure that girls, and all kids, keep their options open so they don’t shut those doors before they ever even get to university.

On the subject of the Lego exhibit:

As you know the top 20 tallest buildings in the world, 577.000 Lego bricks it took over 2400 hours to build. It’s a 200 to 1 scale and you see when you’re there adults love the elegance and the kids love playing with 200,000 lego bricks to play with. We have to have staff hired to just to take the bricks apart at the end of the day because kids build all these things and so at some point they have to come apart. It’s here until early September and so far the feedback has been great. The popular exhibits like Lego Bricks you are years in front of them, they get booked up really quickly. Isn’t it amazing, we are looking to 2022 now.

On being relevant that far ahead:

I think Lego is always relevant, it’s the nice thing about Lego. Our exhibitions our VP and the team are really thinking about kind of what’s going on, they really keep their eye on the exhibits that look like they are going to be really interesting to our guests. Of course we get over 900,000 people here every year and at the same time we also reach out to about 125,000 kids outside of the Dome to really advance STEAM learning so they as well they don’t have to come here to get a little bit of a view of Science World. I was out in Coquitlam last week for one of our science shows in an elementary school and the kids, I love how they, the teacher puts up their hands and the kids just quiet right down. We did these science experiments, the kids come up to be part of it and it’s amazing, it’s really fun.

In terms of the next exhibits for Science World:

We have five different VPs who have five different areas of specialization. Teresa is our marketing expert and she also runs the visitor experience team so when you come into Science World people will greet you, the people that are in the galleries that help explain things that make it a really great experience Teresa runs that organization in addition to marketing. With someone who really looks after the exhibits and the theatre, a community experience person, in terms of what we are doing outside of the Dome all the outreach we have across ever part of British Columbia.

We have someone who runs operations. We have Nancy who does all of the development sponsorships. This would be a huge team effort. Nancy in development; Teresa from a marketing perspective; and a lot of her team is here volunteering this evening. There is an exhibit that Andrea signed up for two years ago, it was a real team effort. We keep our next exhibit under wraps for awhile. After this exhibit it will be a bit quieter, this is a big show.

You can back over and over again because you will never see everything in one visit. We always keep updating the exhibits, changing them. Visitors are not bored when they come here.

Thank you for your interest in Science World. The team is telling me now is the perfect time to visit and have a few cocktails and little food with the other 1300 people here tonight.

Definition: STEAM Education is an approach to learning that uses Science, Technology, Engineering, the Arts and Mathematics as access points for guiding student inquiry, dialogue, and critical thinking. Courtesy of Institute for Arts Integration and STEAM.