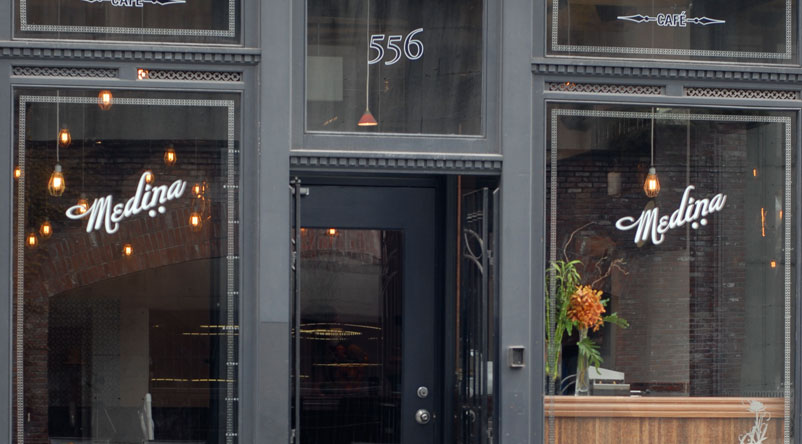 This August, beloved brunch institution Café Medina will move from its current Crosstown location on Beatty Street to a bright and spacious new home only a few blocks away at 780 Richards Street in the burgeoning Library District. 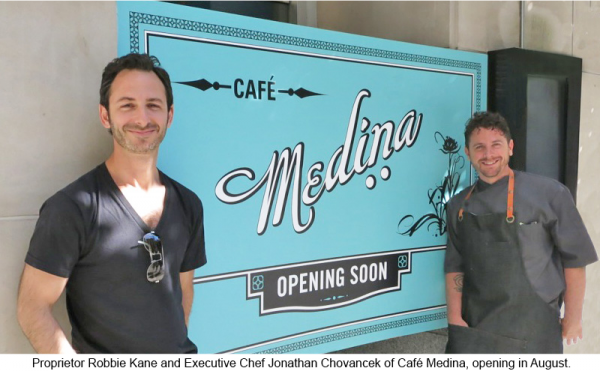 The new location will boast a number of upgrades such as increased seating capacity, a proper bar, open kitchen layout, high ceilings and — as a subtle nod to Medina’s connotation of “radiant or enlightened city” — plenty of natural light. Still, proprietor Robbie Kane is determined to preserve the same brand of eclectic, Mediterranean-inspired cuisine, enlightened hospitality and warm and inviting atmosphere that has captured people’s hearts and stomachs since 2008.“We don’t just serve a meal at Café Medina,” says Kane, who has taken over full ownership of the new location. “We pride ourselves on feeding the soul of each one of our guests and providing them with sustenance in every way, shape and form. That is what has made Café Medina an institution and why people keep coming back, and that remains our top priority as we transition to the new space.”Also new to Café Medina is Executive Chef Jonathan Chovancek, who makes a triumphant return to his kitchen roots after spending the past four years steering his successful retail line of small-batch cocktail bitters and culinary extracts, Bittered Sling, with life and business partner Lauren Mote. In a twist of full-circle serendipity, Café Medina was the site of Chovancek and Mote’s first date.While Chovancek is enthusiastic about putting his own stamp on the menu, longtime aficionados of the Café’s characteristic cuisine need not fear their favourite dishes will disappear. Patrons will also have something completely new to savour this autumn, when the Café begins hosting dinner service in addition to breakfast, lunch and weekend brunch. Additionally, Café Medina will be available in the evenings for private functions and special events.“Being involved in the new incarnation of Medina and joining forces with Robbie Kane, a consummate host and restaurateur, is an honour,” says Chovancek, who honed his skills in such acclaimed establishments as Vancouver Island’s The Aerie Resort, Sooke Harbour House and Zambri’s as well as at Culinary Capers in Vancouver. “I’ve been wanting to get back to the kitchen for a long time and I’m excited to become a part of the Café Medina family.”The reinvention of Café Medina is truly a family affair for Robbie Kane, who met his wife, Medina, at the Café soon after opening its doors. His brother, Brian Kane, is overseeing the design and decor of the new location. A renowned production designer for film and television who recently won an Art Directors Guild Excellence in Production DesignAward, Brian Kane is committed to maintaining the trademark spirit and style of the Beatty Street site by migrating a number of the authentic, European bistro-style flourishes to the new address — such as the distinctive recycled ‘ribbon-glass’ bar top —  while also incorporating modern, updated touches.Café Medina will remain open in its current location at 556 Beatty Street until mid-July and will then reopen at its new address at 780 Richards Street in August. To stay up-to-date on the latest developments, sign up for Medina’s e-newsletter at medinacafe.com, become a fan of /medinacafe on Facebook or follow @CafeMedina on Twitter.

Since it opened in 2008, Café Medina has been serving up its signature brand of Mediterranean-inspired cuisine, connoisseur-savvy coffee and sweet sustenance via the city’s best Belgian waffles. A quaint, bistro-styled restaurant replete with old-world charm and proprietor Robbie Kane’s determined philosophy of enlightened hospitality, Café Medina provides a full complement of fresh and eclectic breakfast, lunch and weekend brunch alternatives and a pioneering attitude towards café culture. In August 2014, Café Medina will move to a bright and spacious new home only a few blocks away at 780 Richards Street in Vancouver’s burgeoning Library District. Hours: Monday – Friday 8 a.m. to 4 p.m., Saturday/Sunday 9 a.m. to 4 p.m. | medinacafe.com | Facebook: /medinacafe | Twitter: @CafeMedina