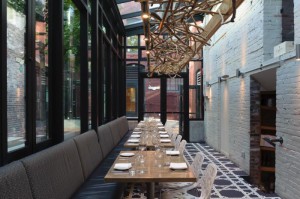 ‘Tis the season to enjoy lazy, savoury meals to ward off the winter chill, and one of Vancouver’s destinations for fine dining is debuting its own take on low-key weekend brunches.

L’Abattoir is opening its doors to the weekend brunch crowd just as the holiday season kicks into full swing. Beginning Saturday December 6, the French-inspired Gastown establishment will add to the neighbourhood’s bustling breakfast scene with a menu mixing comforting staples with hearty, unique entrees.

Holiday shoppers can take refuge from the frosty temperatures and cozy up to L’Abattoir’s classic, clean flavours. Refuel before wrapping up the holiday gift list with a bevy of simple, savoury dishes including eggs benedict with smoked pork belly and a choice of cheddar sabayon or tomato fondue with basil and burrata cheese; hearty Dungeness crab cakes served with poached eggs and potato rosti; and classic crepes filled with fresh fruits and cheese topped with maple syrup.

Behind the bar, Shaun Layton has designed some new cocktail creations to complement brunch dining. This includes the House Aperol Spritz, which bottles charged white wine with Aperol, seltzer and orange, as well as their daily feature vermouth on the rocks served with a seasonal garnish. Warm up from the inside out with a Bourbon Cinnamon Toast Milk Punch, with cereal-infused cream, bourbon and cocoa bitters.

L’Abattoir is located in the heart of historic Gastown. Built in the 19th century it is the site of Vancouver’s first jail and originally buttressed the city’s main meat packing district. This history is reflected in the architecture, and the name L’Abattoir pays homage to the neighbourhood’s colourful past. Open seven days a week for dinner and now five days a week for lunch and weekend brunch, L’Abattoir specializes in French inspired West Coast fare in a refined and comfortable setting.

Ring in New Year’s Eve in Style at L’Abattoir