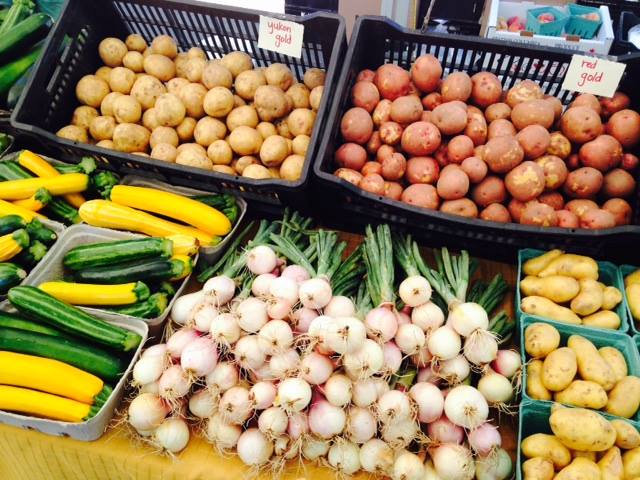 After three successful years, Vancouver Farmers Markets (VFM) will be moving its Yaletown Market at 1200 Mainland to Queen Elizabeth Theatre Plaza (649 Cambie Street at Georgia) in June of this year, the non-profit organization announced today.

VFM made the decision to relocate the market after a small group of Yaletown merchants filed a lawsuit against the Yaletown BIA for agreeing to host a weekly farmers market in the downtown neighbourhood.

“We’re sad and disappointed to have to leave Yaletown, but it feels like we’re being forced out,” said Carla Shore, Chair of VFM’s Board of Directors. “We were hoping that the BIA and those few merchants could reach a positive resolution that benefited all parties. As that hasn’t happened, the farmers market has no other choice but to leave.”

Shore said the situation in Yaletown underlines the importance of longer-term leases and permanent locations for farmers markets so that they can grow and thrive in neighbourhoods – like Yaletown – where residents want them. “It is wrong that a small number of merchants can force out a grassroots farmers market that the local community clearly loves and wants to have here,” said Shore.

“We would love to return to Yaletown in the future,” added VFM executive director Tara McDonald. “If we have the support of the community – and can get a long-term commitment from the community, local merchants and the City to host a market there – we’d love to come back.”

A 2012 BC study showed that farmers markets increase the amount of shopping in nearby businesses, by drawing in more shoppers to the neighbourhood. The study by the BC Association of Farmers’ Markets found that over 54% of market shoppers also shop at other local businesses in the area on market day. Sixty percent of businesses surveyed in the study reported higher sales on market days, and 80% of shoppers said the farmers market was their primary reason for being in that part of town that day.

VFM’s Yaletown Market opens today at 2 pm and will continue to run at 1200 Mainland through the month of May. VFM expects to open the relocated market at Queen Elizabeth Theatre Plaza, effective June 2, 2016. VFM is currently in the process of confirming move timing and the market schedule, and will make a formal announcement of the relocation date once arrangements are finalized.

Founded in 1995 to bring a farmers market to Vancouver’s urban setting, Vancouver Farmers Markets have grown to become one of Canada’s leading farmers’ markets, with eight weekly markets, 455,000 shoppers per year, and annual sales of $8.5 million. Our markets support over 270 small BC farmer and artisan food makers, and help keep over 6,000 acres of local farmland in sustainable food production.