Bard on the Beach Shakespeare Festival continues its 27th season with The Merry Wives of Windsor. Back after its award-winning 2012 run at Bard, this is a big, bold, rollicking romp full of high-spirited fun. Directed again by Johnna Wright, the ‘60s music-filled production is set in Windsor, Ontario and runs from June 17 to September 24 on the BMO Mainstage. 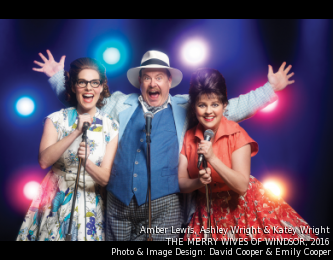 THE STORY: It’s 1968 in Windsor, Ontario. Everyone is gathered at the Garter Inn on a Friday night, where Pastor Evans (Andrew McNee) listens to Justice Shallow (David Marr) complain about a British ex-pat, Sir John Falstaff (Ashley Wright). In an effort to change the subject, Evans suggests that Shallow’s nephew, Slender (Ben Elliott), be matched with Anne Page (Hailey Gillis). At closing time, Falstaff confides in Bardolph (Victor Dolhai) and the Host (Anton Lipovetsky) that he’s broke and plans to seduce and swindle Mistress Ford (Amber Lewis) and Mistress Page (Katey Wright). The next morning, Simple (Dawn Petten) asks Mistress Quickly (Jennifer Lines), housekeeper to Dr. Caius (Andrew Chown), to help Slender woo Anne. This gets Simple into trouble with Caius, who wants Anne for himself. While canoodling at the Page home, Anne and her boyfriend Fenton (Daniel Doheny) are interrupted by Slender, and then by her father, Page (Tom Pickett). Page sends Fenton away and invites Slender in, even though his wife prefers Caius for their daughter. Meanwhile, two identical love letters are sent by Falstaff, one to Mistress Ford and the other to Mistress Page. They decide to send a response to Falstaff from Mistress Ford, making a date for the next day. The husbands hear about Falstaff’s seduction plans, and Ford (Scott Bellis) worries about his wife’s fidelity. Disguised as Mr. Brook, Ford learns the details of Falstaff’s plan from Falstaff himself. He attempts to catch Falstaff in the act, but Falstaff is smuggled out unseen in a laundry cart. Ford’s friends tell him not to be so jealous, but still enraged (and again disguised as Mr. Brook) he learns that Falstaff plans to visit his wife a second time. Ford once again interrupts Falstaff’s seduction, digging frantically through his own laundry cart while Falstaff escapes disguised as an old woman. Mistress Ford and Mistress Page finally tell their husbands the whole story, and plan their unique revenge on Falstaff. Everything comes to a head as the whole town gathers in the dark outside the abandoned Herne’s Oak Curling Club, where nothing is quite what it seems.

Audiences will be taken back to 1968 Windsor, Ontario with this re-imagining by Director Johnna Wright (winner of the 2012 Jessie Award for Best Director). Scenery Designer Pam Johnson brings nostalgic period elements to the small-town pub setting, creating the backdrop for Costume Designer Drew Facey’s period-inspired prints. ‘60s pop and country music is performed by a live band led by Musical Director Ben Elliott and the mood is enhanced by Lighting Designer Gerald King. Choreographer Valerie Easton and Fight Director Nicholas Harrison create the comic near misses and love-fueled duels of Windsor’s residents. Props are designed by Heidi Wilkinson; Rohit Chokhani is Apprentice Director.

Performance details for The Merry Wives of Windsor are as follows:

• Runs Tuesday through Sunday, June 17 to September 24, on the BMO Mainstage in Vanier Park

Ticket prices for 2016 include all applicable fees and taxes and begin at $20 for every regular performance. Early booking is recommended for best seat selection; all seats are reserved and many performances sell out in advance. Play photography, the performance schedule and more site and event details are at bardonthebeach.org. Book tickets through the Bard Box Office at 604-739-0559, (toll free) 1-877-739-0559 or order online through the Bard website. Bard on the Beach gratefully acknowledges its 2016 Season Sponsor, Goldcorp, and the production sponsor of The Merry Wives of Windsor, Polygon.

BARD ON THE BEACH ADDS PERFORMANCES DUE TO POPULAR DEMAND

POWER AND PREJUDICE: THE MERCHANT OF VENICE JOINS THE 28TH SEASON OF BARD ON THE BEACH