Bard on the Beach Shakespeare Festival begins its 27th season with Romeo and Juliet. Shakespeare’s sweeping story of two star-crossed lovers inspires audiences even as it breaks their hearts. Directed by award-winning director Kim Collier (Hamlet, 2013), this timeless romantic tragedy runs from June 3 to September 23 on the BMO Mainstage. 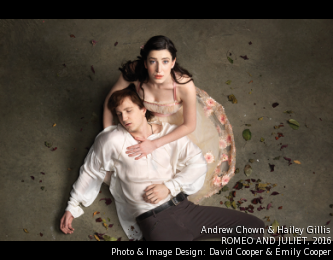 THE STORY: Two powerful families in Verona, the Capulets (Ashley Wright, Dawn Petten) and the Montagues (David Marr, Amber Lewis), have been feuding for generations. When a fight breaks out between the families, Prince Escalus (Victor Dolhai) threatens death to anyone who disrupts the peace again. Meanwhile, Lord Capulet learns that Count Paris (Shaker Paleja) is eager to wed his daughter Juliet (Hailey Gillis) and hosts a masked ball to launch the courtship. Both Lady Capulet and Juliet’s nurse (Jennifer Lines) encourage her to consider Paris’ proposal. Through a mistake by the illiterate servant Peter (Andrew Cownden), Lord Montague’s son Romeo (Andrew Chown), his friend Benvolio (Ben Elliott) and Prince Escalus’ kinsman Mercutio (Andrew McNee) hear of the party and they decide to attend in disguise. Juliet’s hotheaded cousin Tybalt (Anton Lipovetsky) recognizes Romeo as a Montague, but Capulet forbids him to fight. Meantime Romeo and Juliet meet and fall in love before each discovers the other’s identity and opposing family affiliation. In spite of the divide between them, they profess their love and decide to wed secretly. Friar Laurence (Scott Bellis) agrees to marry the pair, hoping their union will end their families’ bitter feud. Later, Tybalt encounters Romeo and challenges him to a duel. When Romeo refuses to fight, Mercutio fights Tybalt instead and is fatally wounded. Enraged at his friend’s death, Romeo slays Tybalt and is banished from Verona by Prince Escalus. With the Friar’s help, Romeo escapes to Mantua after marrying Juliet. Juliet, whose family is still urging her to marry Paris, is offered a potion by Friar Laurence to make her appear dead. Mistaken and lost messages by Balthasar (Daniel Doheny) and Friar John (Tom Pickett) set in motion the final fateful events for the doomed lovers.

Performance details for Romeo and Juliet are as follows:
• Previews: June 3, 4, 5, 7, 9; OPENS: Friday, June 10 at 7:30pm
• Runs Tuesday through Sunday, June 3 to September 23, on the BMO Mainstage in Vanier Park
• Plays in repertory with The Merry Wives of Windsor, which begins previews on June 17

Ticket prices for 2016 include all applicable fees and taxes and begin at $20 for every regular performance. Early booking is recommended for best seat selection; all seats are reserved and many performances sell out in advance. Play photography, the performance schedule and more site and event details are at bardonthebeach.org. Book tickets through the Bard Box Office at 604-739-0559, (toll free) 1-877-739-0559 or order online through the Bard website. Bard on the Beach gratefully acknowledges its 2016 Season Sponsor, Goldcorp, and the production sponsor of Romeo and Juliet, RE/MAX.