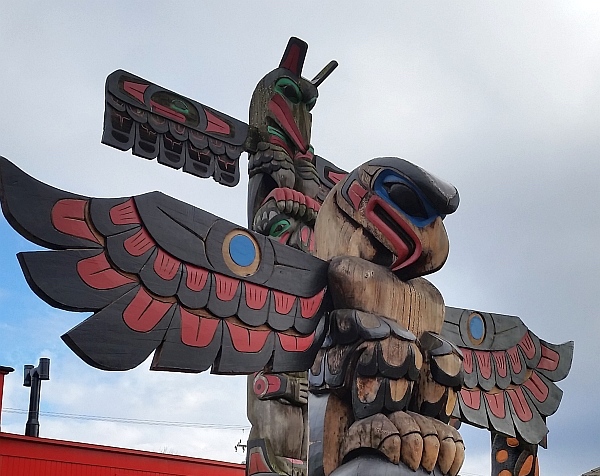 Following my High Tea at the Empress Hotel in Victoria; checking off a bucket list item, I decided to take my courtesy Ford Escape up Island to Duncan, BC, to do their Totem Tour Walk.  There are 40 totem poles in the downtown core of Duncan, with each pole having a descriptive plate about what the pole represents and who is the carver.

I started my tour beside the Cowichan Valley Museum which has 4 totems to the left of it and 5 to the right.  The totems come in all sizes and shapes.  Some are painted while others are plain cedar.  Each totem has a story to tell.  Take for example the totem called “The Feast” that is based on a local Quw’utsun’ legend.  From the plate describing the pole, “The Quw’utsun’ people called upon Tzinquaw (Thunderbird) to help them. The Killer Whale was eating all the Salmon in Cowichan Bay and the Salmon were not getting up the river. Tzinquaw helped them by taking the Killer Whale out of the bay and putting it on top of Mount Tzouhalem, the mountain beside the bay, where Tzinquaw ate him. The Spirit-Helper face in the Killer Whale represents the blowhole of the Whale. The face in the fluke (tail) of the Whale represents a(second) Spirit Helper. Doug explained the presence of the eagle: The story was the Thunderbird but I made the figure into an Eagle, I wanted to show the power of it, so I did the legs muscular and strong…“.

I quite enjoyed reading about each totem, and being able to guess the different animals, birds, fish and spirits that are on each pole.  Can you see the Thunderbird on the top of this totem?  Can you find the blow hole from the Killer Whale?

On several poles I did notice a female figure called a Dzunuk’wa (Wild Woman).  This woman is known along the coast.  This particular pole is called “Thunderbird with Dzunuk’wa“.  It is described as “On top is a Kwankwanxwalige’ (Thunderbird). Thunderbird first helped lift our first bighouse beams into place and is a source of mythological and supernatural powers. The fearsome legend of  Dzunuk’wa, with her boney face and hanging breasts, is an object of terror and at the same time of power and wealth. Her arms are outstretched in a sign of mourning, or at times poised to grab a strayed child from outside a village. Dzunuk’wa is usually painted black and red; colours that represents the underworld…“.

Dzunuk’wa is a bringer of wealth but also feared by children as it is said that she may steal children away and eat them later.  From Wikipedia “She is venerated as a bringer of wealth, but is also greatly feared by children, because she is also known as an ogress who steals children and carries them home in her basket to eat. Her appearance is that of a naked, black in colour, old monster with long pendulous breasts. She is also described as having bedraggled hair. In masks and totem pole images she is shown with bright red pursed lips because she is said to give off the call “Hu!” It is often told to children that the sound of the wind blowing through the cedar trees is actually the call of Dzunuḵ̓wa. Some myths say that she is able to bring herself back from the dead (an ability which she uses in some myths to revive her children) and regenerate any wound. She has limited eyesight, and can be easily avoided because she can barely see. She is also said to be rather drowsy and dim-witted. She possesses great wealth and will bestow it upon those who are able to get control of her child…”

One last totem pole that I must mention is “Cedar Man Walking Out of the Log” as Cedar Man is the world’s widest totem pole with diameter of 1.8m [5’11”], and comes from a 750 year old tree harvested by MacMillan Bloedel.  From the plaque “The design came from a Hunt family pole that honoured Mungo martin, a Kwagu’ł master carver. The top of log was left natural so people could see the size of the log and it forms the hairline for the Cedar Man. On the chest there is a Copper (shield), which represents wealth in Kwagu’ł families. The skirt represents the traditionally worn cedar-bark skirt. On the talking stick*, the representations are all family crests: the top is the Kulus (Baby Thunderbird)which represents Richard dancing the tamed Hamatsa; the Killer Whale in the middle represents spirits of our Great Chiefs; and the Man on the bottom represents a Kwagu’ł family member...The talking stick is held by a chief who has the right to speak at ceremonies and contains his family crests...”

It is truly a sight to see, when you stand beside this pole and realize how really large it is.

Walking through downtown Duncan, reading the plaques, and taking pictures of the totem poles can easily be done in 1-2 hours, longer if it is a sunny day and you also wish to doddle through the stores that are along Station St.  After which, there are quite a few places to eat.  I visited the Craig Street Brew Pub.  Enjoy a craft beer and a well cooked meal. 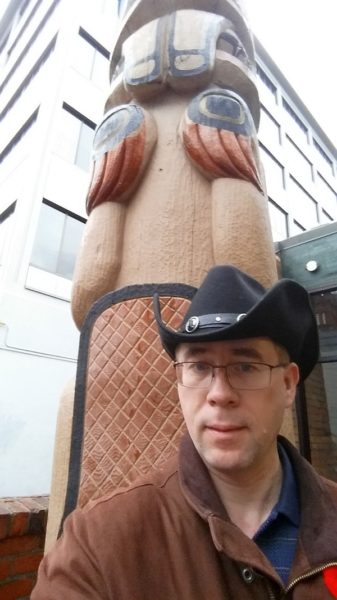 Come to Duncan, tour the totems, and learn about our Indigenous culture.  Thanks to Ford Canada for providing me with their Ford Escape to help me cross off two bucket list items on my trip to Vancouver Island.