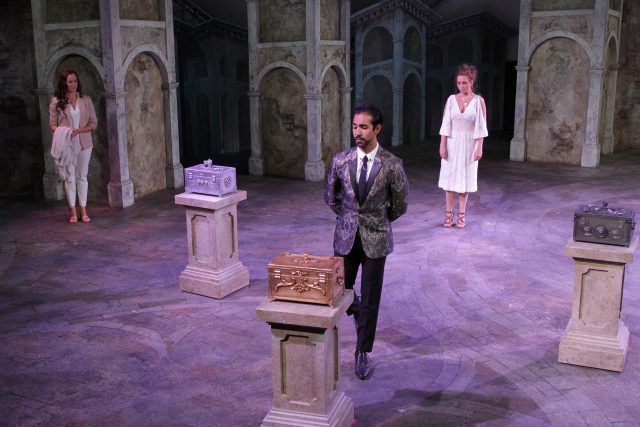 Director Nigel Shawn Williams’ decision to set The Merchant of Venice in a current, modern Venice is truly thought-provoking and unsettling. We usually observe the actions of Shylock, the bullied Jewish moneylender, and Antonio, the benevolent bankrupt borrower, as characters of, and from, the past, when racism and thus, bullying were more overt. We assume that it could not have happen in the present day, a more enlightened time. However, today, when racism is openly encouraged and accepted from world leaders, we see the characters in a more frightening way. Every character, no matter how good or thoughtful, is also guilty of unseemly behaviour, dismissing others for their religion, race, colour or sex.

The story tells of Bassanio (Charlie Gallant), a currently bankrupt young man, who needs a loan of 3,000 ducats (current value around $700,000) to woo Portia (Olivia Hutt), a beautiful and brilliant heiress. He asks his wealthy friend, Antonio (Edward Foy), who is currently cash poor but anticipating a windfall when his ships come in, to lend him the money.  Antonio goes to Shylock (Warren Kimmel) in order to help his friend, but Shylock, bitter from Antonio’s anti-Semitic treatment, demands a pound of flesh if the debt is not repaid on time.

Portia, the Belmont heiress, whose father has left her with a riddle of a will in which suitors must choose from three caskets, but only one allows for her hand in marriage. Princes of Morocco (Nadeem Philip) and Aragon (Paul Moniz de Sa) have come and guessed incorrectly. In doing so, we see Portia’s inadvertent racism but still sympathize with her desire to have the issue solved, unaware that she will cede her freedom of will to the successful suitor. She is ably supported by her Estate Manager, Nerissa (Luisa Jojic). Both women find love when Bassanio opens the correct casket for Portia and his best friend, Gratiano (Kamyar Pazandeh) partners with Nerissa.

As this unfolds, Shylock’s daughter, Jessica (Carmela Sison), has fallen in love with Bassanio’s other friend, Lorenzo (Chirag Naik), and knowing her father won’t approve of a Christian, elopes and takes Shylock’s fortune with her.

Antonio’s ships do not come in, all of them are lost or sunk and immediately, Shylock demands his pound of flesh, Antonio’s heart!

The court scene is ambushed by an expert lawyer and a renowned judge who mysteriously appear, Portia and Nerissa disguised as men. The ensuing trial reveals the hidden hatred between the parties. It secures Jessica’s freedom and leaves Shylock broken.

Antonio is saved and his friends show their strong, hateful feelings in the throes of their graceless victory. Bassanio spits in Shylock’s face, loses the respect of Portia by giving away her betrothal ring, and their friends flamed Shylock’s anger by tormenting him in a variety of ways.

No one is innocent. Each and every character reveals his or her bigotry or racism.

Lorenzo, Gratiano, Valeria (Adele Noronha) and Solania (Kate Besworth) are characters that help establish the mood of the time when some people are entitled and privileged. Even Lancelet (Andrew Cownden), Shylock’s and Bassanio’s employee, reveals his disregard for the young lady he seduces.

Shylock, who endures unbelievable anti-Semitic harassment,  cries at losing his daughter but later reveals that losing his jewels was worse. A sad notion.

The set by Marshall McMahen must work for The Merchant of Venice in the present day and The Two Gentlemen of Verona in a different era.  Sculptured towers become an Italian cityscape, a bistro coffee shop, a stock market, a country home and eventually a court house. Furniture, modern steel and glass, is moved by marching robotic people in cloaks.

The music by Patrick Pennefather adds to the mood, the rush of the city and then the peaceful country, created by original music and Italian masters like Monteverdi and Vivaldi.

Finally, the gorgeous costumes of Drew Facey, are the piece de resistance for this play. The suits worn by the actors could have come off the designer runways of Milan or the fashionistas of Rome. Sophisticated, exquisitely tailored, and in a black and white palette the sleek clothes are used to establish the wealth of the people. In the country, pale blue, cream, and pastels establish a very different ambiance for the people.

The performances of Kimmel, Foy and Gallant are all excellent but Olivia Hutt steals the show. She plays Portia as independent, yearning, hopeful and loving.  She reveals courtroom brilliance, then a realization that she has given up her freedom for love and her difficulty in understanding her life as it will now be.

The Merchant of Venice is both entertaining and thought provoking.  Although the Shylocks of the world may not be openly treated as poorly today as in the past,  the play forces us to remember that many experience the same stereotypes, racial slurs, and bigotry that were so prevalent in Shakespeare’s time.