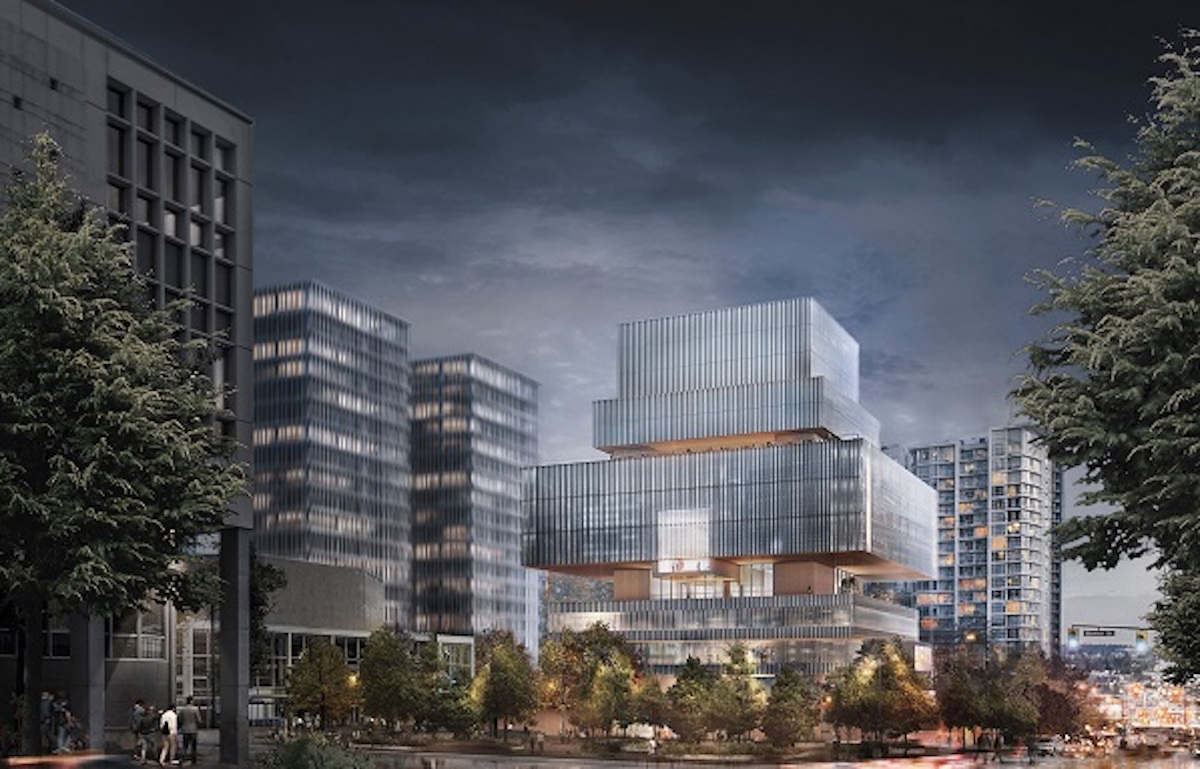 The Vancouver Art Gallery is celebrating a major milestone toward the realization of a transformational new building with the announcement of a $40 million lead gift from the Chan Family. This unprecedented act of generosity by the Chan Family brings the Gallery’s capital campaign to $85 million in private sector funding toward the new purpose-built facility. In recognition of this extraordinary gift, the Vancouver Art Gallery’s new building will be named Chan Centre for the Visual Arts. 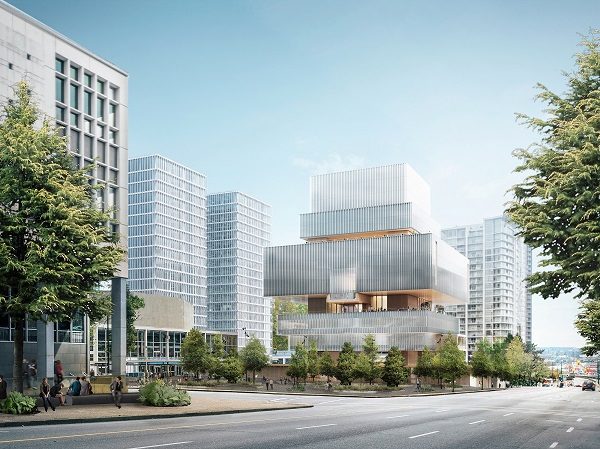 “We are also extremely grateful for the incredible generosity of the Board of Trustees and the many significant donors from across the community for helping us reach this milestone as we continue to work towards the new Vancouver Art Gallery Building,” added Bartels.

The gift from the Chan Family —the largest-ever single private donation to an arts and culture organization in British Columbia—builds on the Family’s long-standing history of supporting education as well as arts and culture institutions and programs with the aim of enriching communities in Canada and beyond. 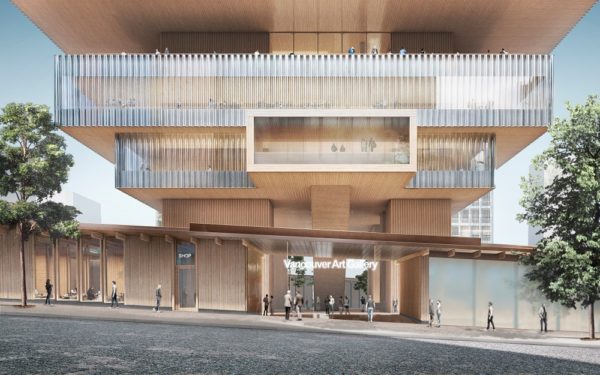 “The Vancouver Art Gallery’s new building project fits perfectly into our family’s philosophy, mandate, and charitable mission, which is to create equal opportunity for everyone to enjoy and nurture a healthy body, mind and soul,” said Christian Chan, Gallery Trustee and speaking on behalf of his family. “We truly believe in the power of art to bring people together and to bridge divides, cultural gaps, to promote social understanding, and to help people better understand themselves and others, and that is what the new Vancouver Art Gallery building will help accomplish.”

“This act of generosity by the Chan Family is philanthropy at its core, touching on the true essence of public good, civic engagement, and support for a significant legacy project that will bring countless benefits to all British Columbians for generations to come,” said Lisa Turner, Gallery Trustee and Co-Chair of the Gallery’s capital campaign. 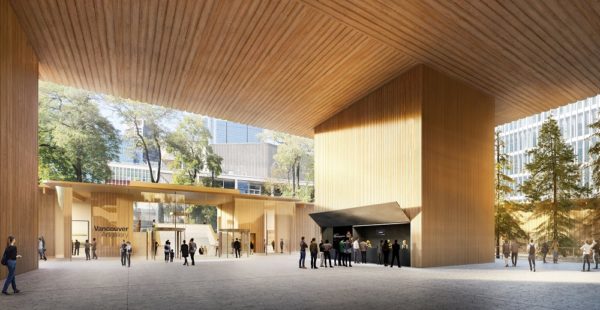 Along with the Chan Family’s lead gift to name the new building, the Vancouver Art Gallery is also celebrating $45 million in other private sector support that has been made over the last several years, including significant contributions driven by the Gallery’s Board of Trustees. In particular, the generosity of fourteen individuals, families, foundations, and corporate supporters, who have contributed $1 million or more each demonstrating a wide range of support for this important project and a recognition of the incredible benefits it will bring to the entire community including tourism and as a significant economic driver.

Designed to serve the Gallery’s expanding collection and to present outstanding art and educational programs for its expanding audiences, the new Vancouver Art Gallery will provide a global platform for Vancouver’s and Canada’s thriving arts scene and play a vital role in establishing this city as one of the world’s foremost cities for arts and culture. Situated at Larwill Park, unifying the crossroads of Downtown, Yaletown, Gastown, east Vancouver and Chinatown, the new Gallery will fuel a hub of creative and cultural activity for local members, the public and international visitors of all ages.

“The project for the new Vancouver Art Gallery has a civic dimension that can contribute to the life and identity of the city, in which many artists of international reputation live and work. The building now combines two materials, wood and glass, both inseparable from the history and making of the city. We developed a façade out of glass logs which is pure, soft, light, establishing a unique relation to covered wooden terraces all around the building,” said Christine Binswanger, Partner in Charge, Herzog & de Meuron.

Herzog & de Meuron have designed the Vancouver Art Gallery’s new museum as a sculptural, symmetrical, upright building combining opaque and transparent surfaces, with larger volumes concentrated at the top and minimal mass at the bottom. By lifting the bulk of the structure high above the street, the design allows light and air to filter down to an active, open-air courtyard below.

“The new Vancouver Art Gallery is a vertical building, distinctly spectacular at first sight, with an arrangement that resonates with the place where it is built. It offers ample outdoor spaces that are sunny in summer and protected from rain in winter, to suit the climate and life in British Columbia. Visitors to the building will be able to perceive Vancouver’s urbanity and its amazing natural setting in many different ways”, described Herzog & de Meuron.

“Together with our team of BC experts and our client, we defined the building to a much higher degree: galleries, classrooms and reading rooms, the theatre, restaurants and shops, and all the public outdoor spaces are well enhanced. The new Vancouver Art Gallery is close to reality.”

With a generous designation of the land at Larwill Park from the City of Vancouver in place and $135 million in total private and public sector funding secured, including an initial investment of $50 million from the Province of British Columbia, the next step for the Vancouver Art Gallery Capital Campaign will be to continue its work with senior levels of government and the private sector to secure the additional funding needed to begin construction.

“We are thankful to be the beneficiaries of strong support from our partners at the City of Vancouver with all aspects of the project including the generous contribution of two thirds of the land at Larwill Park,” added Bartels. “We are pleased that the Provincial and the Federal governments remain keenly interested in this project and have been steadfast in their encouragement as we continue our private sector fundraising efforts.”

Along with the Chan Family’s lead gift to name the new building, the Vancouver Art Gallery is also celebrating $45 million in other private sector support that has been made over the last several years, including significant contributions driven by the Gallery’s Board of Trustees. In particular, the generosity of fourteen individuals, families, foundations, and corporate supporters, who have contributed $1 million or more each demonstrating a wide range of support for this important project and a recognition of the incredible benefits it will bring to the entire community including tourism and as a significant economic driver.

For their commitments of $5 million:

Phil Lind (including a legacy gift)

For their commitments of $3 million:

For their commitments of $2 million:

For their commitment of $1.5 million:

And, for their commitments of $1 million:

A donor who wishes to remain anonymous

Executive Architect: Perkins + Will, Vancouver BC

Structure: Concrete and steel, wood and glass at courtyard buildings

Energy Efficiency Standard The Gallery plans to the Passivhaus design, a rigorous standard for energy efficiency in a building which reduces the building’s ecological footprint. It results in ultra-low energy buildings that require little energy for space heating or cooling.

About the New Building:

• The new Gallery building with its community spaces, 350-seat theatre, free-access galleries, complementary admission programs, and publicly accessible Resource Centre Library and archives will be a creative and cultural hub, serving as an inspiring gathering place for the entire community.

● The Gallery will provide a welcoming environment for residents and visitors alike to embrace and share creativity, and to explore and celebrate different ideas and cultures, positively impacting countless lives for generations to come.

● The new building will allow for a major expansion of the Gallery’s education programs with dedicated spaces affording the ability to reach nearly 90,000 children and youth per year, not just in Metro Vancouver, but potentially across the province as well.

● The new building will provide the opportunity to dramatically increase the size and scope of the Gallery’s exhibitions including approximately 25 Permanent Collection Galleries, and dedicated spaces to help tell British Columbia’s artistic story to the world with Indigenous art, works by Emily Carr, as well as hundreds of other favourite pieces from the Gallery’s collection.

● As a major tourism destination, employer, and economic driver, the new Gallery building will provide wide-ranging benefits across the entire economy

● The new building will allow us to extend our commitment to artists and the thriving contemporary art community in British Columbia. It will provide a global platform for this community, heightening this city’s reputation as one of the world’s foremost destinations for arts and culture.

• In 2014, the Vancouver Art Gallery announced it had selected Herzog & de Meuron as the architects to design the New Building.

• Herzog & de Meuron have designed a wide range of projects, from the small scale of a private home to the large scale of urban design. The studio’s most recognized buildings include the National Stadium for the 2008 Olympic Games in Beijing, China (also known as the Bird’s Nest) and the conversion of the Bankside power plant to Tate Modern in London, UK (2000/2012).

• Herzog & de Meuron have completed a series of internationally acclaimed museum buildings. Built projects include Schaulager Basel, Laurenz Foundation, a warehouse for the open storage of contemporary art, in Basel/Münchenstein, Switzerland (2003); the Walker Art Center Expansion in Minneapolis, USA (2005); and the de Young Museum in San Francisco, USA (2005). The firm‘s latest completed museums are the Parrish Art Museum in Water Mill, NY, USA (2012), the Pérez Art Museum Miami, which opened to the public during Art Basel Miami Beach in December 2013, the extension and renovation of Musée Unterlinden in Colmar, France (2015), and Tai Kwun, Centre for Heritage & Arts in Hong Kong. M+, a cultural center for 20th and 21st century art is currently under construction.

• Awards: The practice has been awarded numerous prizes including The Pritzker Architecture Prize (USA) in 2001 and the RIBA Royal Gold Medal (UK) and the Praemium Imperiale (Japan), both in 2007. In 2014, Herzog & de Meuron was awarded the Mies Crown Hall Americas Prize (MCHAP) for 1111 Lincoln Road, Miami Beach.