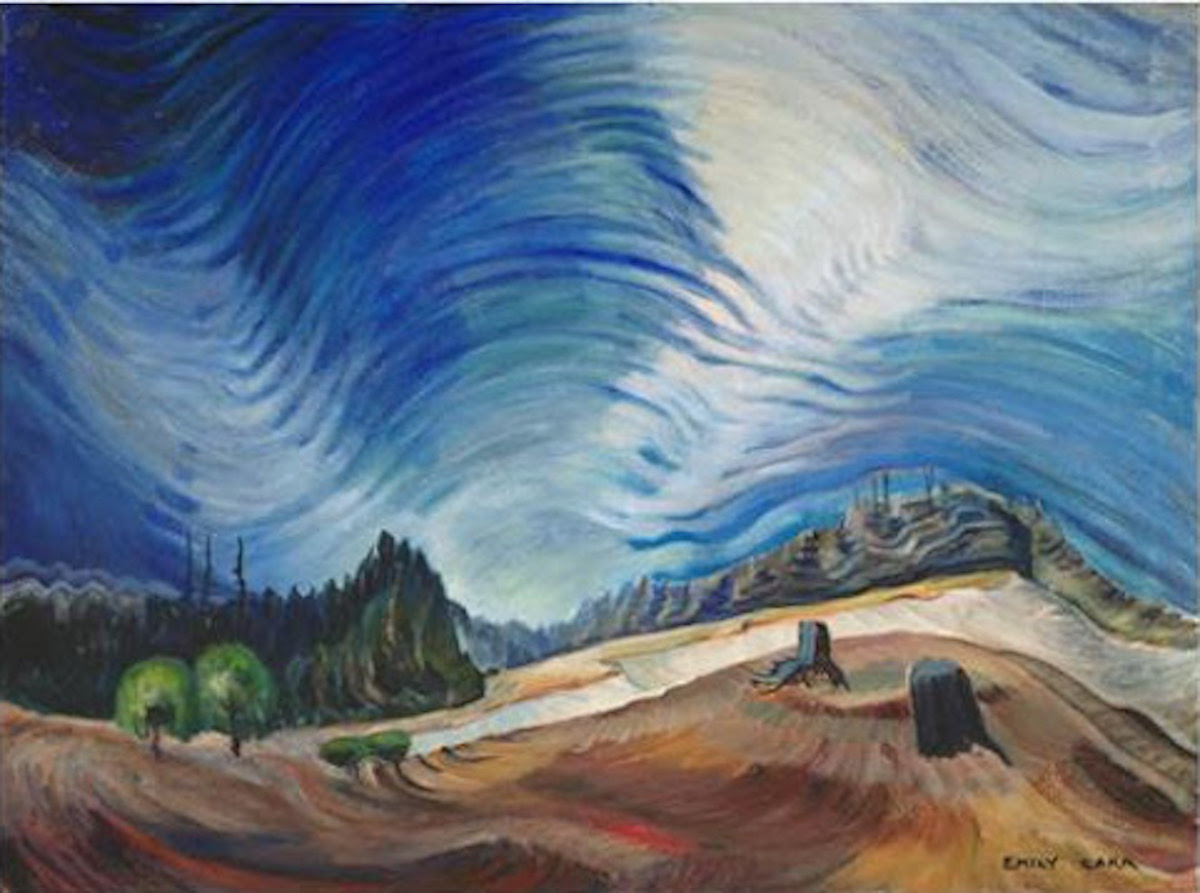 The Vancouver Art Gallery Announces a
New Installation from its renowned Collection of
Emily Carr works, on display in its Rotunda

Beginning June 1, visitors to the Vancouver Art Gallery will have an opportunity to see signature paintings by Canada’s famed Emily Carr in the Gallery’s first floor Rotunda. As part of a commitment to showcasing its permanent collection, including its world-renowned Carr holdings, the Gallery will present an installation of Carr works to be on view for the next year.

“The Vancouver Art Gallery is home to the richest collection of art by Emily Carr in the world, with an impressive holding of the artist’s forest paintings from the 1930s,” said Daina Augaitis, Interim Director, Vancouver Art Gallery. “This special exhibition in the Gallery’s Rotunda reflects Carr’s direct engagement with and great affection for British Columbia’s landscape—for her, a site of artistic and spiritual inquiry.”

This presentation brings together four of Carr’s iconic paintings: Big Raven (1931); Red Cedar (1931); Scorned as Timber, Beloved of the Sky (1935); and Above the Gravel Pit (1937). These works offer insight into the development of the artist’s practice, the diverse ways in which she depicted the landscape, and the varied techniques she employed. Together, the works demonstrate that while many early settlers in this region perceived the forests as wild and impenetrable, Carr sought to represent the vitality of the natural world and seized the opportunity to present a deeply personal vision of the coastal rainforest.

About Emily Carr
Born in Victoria, British Columbia, Emily Carr (1871–1945) is one of the most significant Canadian artists of her generation. This West Coast modernist is widely recognized for her iconic paintings depicting the forested landscape of British Columbia and Indigenous communities that she visited on her sketching trips in 1908, 1909, 1912 and 1928. Carr’s first important body of work was executed in 1912 when, using the new sense of colour and paint handling she developed in France in 1911, she turned her attention to the totemic art of the Indigenous groups of British Columbia. This work was not well received when it was first exhibited in 1913 and for many of the years that followed she rarely painted. In 1927, she was included in the Exhibition of Canadian West Coast Art: Native and Modern at the National Gallery of Canada, where her work was widely praised. Encouraged by fellow artists, notably Lawren Harris, Carr returned to painting and continued to paint actively until 1942, when ill health curtailed her practice. In later life, she devoted more time to writing; her first book Klee Wick won the Governor General’s Award for Literature in 1941.

About the Vancouver Art Gallery (vanartgallery.bc.ca)

Founded in 1931, the Vancouver Art Gallery is recognized as one of North America’s most respected and innovative visual arts institutions. The Gallery’s ground-breaking exhibitions, extensive public programs and emphasis on advancing scholarship all focus on historical and contemporary art from British Columbia and around the world. Special attention is paid to the accomplishments of Indigenous artists, as well as to the arts of the Asia Pacific region—through the Institute of Asian Art that the Gallery founded in 2014. The Gallery’s programs also explore the impacts of images in the larger sphere of visual culture, design and architecture.

The Vancouver Art Gallery is a not-for-profit organization grateful to the support it receives by its members, individual donors, corporate funders, foundations, the City of Vancouver, the Province of British Columbia through the BC Arts Council, and the Canada Council for the Arts.

The Vancouver Art Gallery is situated on traditional, ancestral and unceded territory of the xʷməθkʷəy̓əm (Musqueam), Sḵwx̱wú7mesh (Squamish) and səl̓ilwətaɁɬ (Tsleil-waututh) peoples, and is respectful of the Indigenous stewards of the land it occupies, whose rich cultures are fundamental to artistic life in Vancouver and to the work of the Gallery.