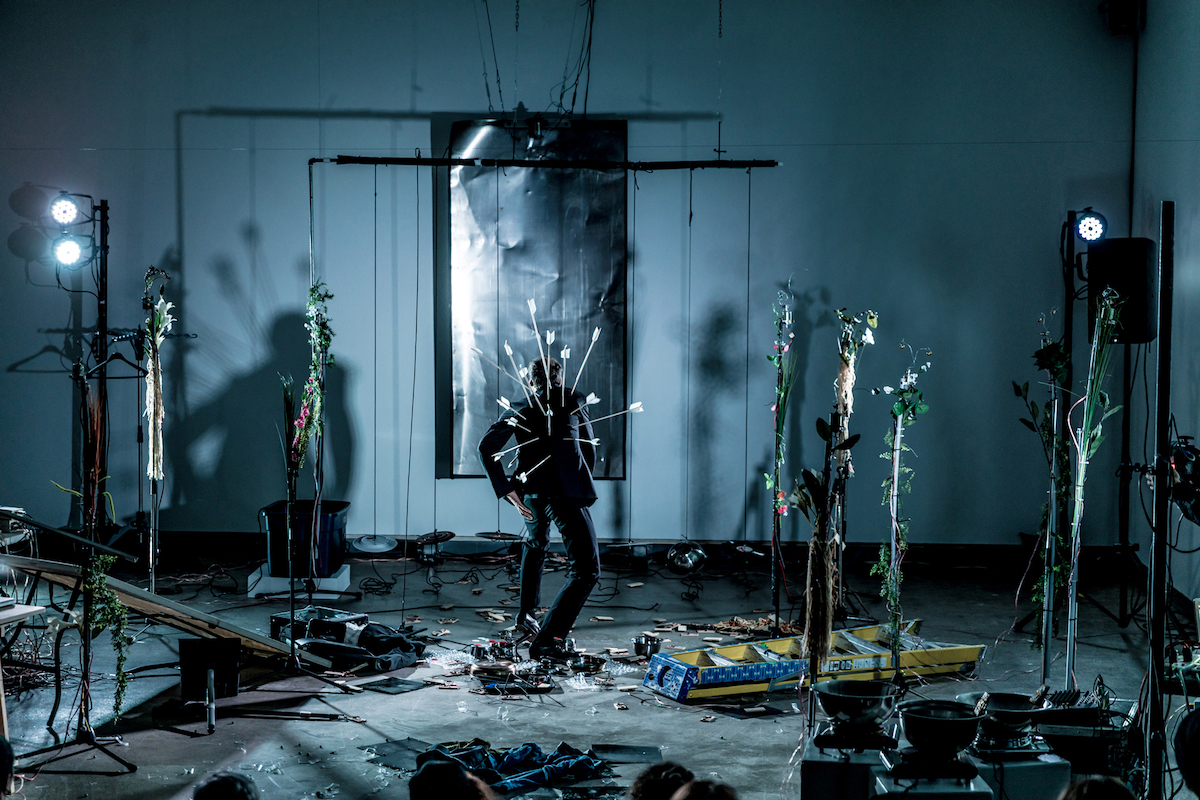 The Dance Centre’s 2019-2020 season presents a program of exciting performances and events by artists working across contemporary and cultural genres. The Global Dance Connections contemporary dance series features Canadian and international choreographers, and the popular Discover Dance! series presents a varied range of dance styles. Other highlights include the 12th biennial Dance In Vancouver showcase of the BC dance community, the annual Scotiabank Dance Centre Open House, and residencies and research labs throughout the season.

Founded in Rio de Janeiro in 2000 by Brazilian choreographer Alex Neoral, Focus Cia De Dança has found huge audience success at home and abroad with its surging physicality and poetic depth. Neoral’s artistic approach is rooted in Brazilian tradition but is fiercely modern, blending ballet and contemporary techniques. Still Reich comprises four dynamic works choreographed to the propulsive music of the iconic American composer Steve Reich. Pathways is built on intricate duets; Trilasexplores how everything can change in a moment; Wood Steps is inspired by nomadic life; and Keta shows the dancers working at maximum power and velocity. Packed with complex partnering and sculpted shapes, the fluent choreography drives a celebration of movement, sound, and rhythm.

Australian choreographer Lucy Guerin’s sharp, elegant Split reflects the dilemmas of negotiating with oneself and others in a world of increased pressure and reduced resources. Two outstanding female dancers – one clothed and one naked – are framed by ever-diminishing dimensions of space and time with escalating intensity, accompanied by a pulsing electronic score. Cycling through competition, negotiation, harmony and aggression, this thought-provoking, multilayered work has received numerous awards. Lucy Guerin Inc was established in Melbourne in 2002 and is regarded as one of Australia’s most fearless dance companies, touring internationally. Guerin has also been commissioned by leading organizations including Mikhail Baryshnikov’s White Oak Dance Project, Rambert, and Chunky Move.

Vancouver’s Out Innerspace Dance Theatre combines virtuosic, hyper-detailed choreography with visual magic to make engaging dance works which reflect a time of rapid change, of ever-shifting boundaries, and of conflict and hope. Bygones is a new work created and performed by co-directors David Raymond and Tiffany Tregarthen in collaboration with dancers Renée Sigouin, Elya Grant and David Harvey. It considers how we are shaped by what we have overcome: and how something challenging can lead to something beautiful. Innovative movement, ghostly architecture, and transformed objects immerse us in a haunting universe of pseudo-things and supernatural selves existing on the margins of form and formlessness.

The audacious and original works of Montreal-based dance artist Dana Michel have earned international attention and prestigious awards including the Jardin d’Europe Award at ImPulsTanz (Vienna), and the Silver Lion for Innovation in Dance at the Venice Biennale. Michel breaks through conventions with her daring choreographies, rejecting stereotypical physicality and identity, and creating a liberated world of shape-shifting metamorphosis, incorporating elements ranging from sculpture and comedy, to psychology and social commentary. Her latest creation, CUTLASS SPRING, delves into the mystery of the sexual self, exploring how cultural repression and her life as a performer, a mother, and a lover have shaped her sexual identity.

In Dollhouse, Canadian contemporary dance master and choreographer Bill Coleman portrays a figure whose whole world is literally falling in around him. Inhabiting a cluttered room which collapses and breaks at his every touch, he shares the stage with sound artist Gordon Monahan, whose unique score accompanies the descent into theatrical disintegration. Coleman resembles a modern fakir, as he suffers through painful yet comical situations on his way to sonic and visual chaos. Wildly original and virtually unclassifiable, Dollhouse encompasses tap dancing, performance art and sound installation, using mechanical and electronic objects, both handmade and found, to deliver surprising and dazzling images and rhythms.

We Love Arabs dives headlong into the toughest of questions – how can we co-exist within conflict? Somewhere in Tel Aviv, a Jewish choreographer enlists an Arab dancer to help create a work that will overcome fears and carry a message of peace. But as the work progresses, power struggles ensue; bodies resist control. Skewering choreographic fads as well as unconscious bias and misplaced good intentions, the piece unfolds as a corrosively funny takedown of politics, ethnic stereotypes, and contemporary dance itself. Hillel Kogan is one of Israel’s most successful independent choreographers, blending biting political and social commentary with a highly physical movement language, and this award-winning work has been a hit on stages all over the world.

Originally springing from India’s booming film industry, Bollywood dance has become its own wildly popular genre, fusing jazz, folk and modern influences with larger-than-life comedy and drama. The Shiamak Vancouver Dance Team will get your toes tapping with an explosive, high-energy performance packed with vitality and fun.

The Vancouver Pars National Ballet was founded in 1989 by Azita Sahebjam, who emigrated from Iran to Canada after dancing was banned in her homeland. The company has earned a stellar reputation for its work preserving Iranian traditional and folkloric dances, and supporting new creations. A delightful whirlwind of movement, intoxicating music, and colourful costumes, this program will feature dances from some of the many regions, ethnic groups and cultures of Iran.

Get set for a percussive extravaganza with this gathering of accomplished and entertaining dancers! Introduced by Artistic Director Andrew Nemr, this program showcases the infectious rhythms, technical skill and musicality of tap dance, tracing its history and its contemporary innovations. The dancers will ‘lay down some iron’ and create a rhythmic conversation full of zest and charm.

Immigrant Lessons burst onto the Vancouver dance scene in 2017: this vibrant young collective promotes cultural pluralism through dance, music, fashion and visual design. Using an exciting mashup of styles including street dance, hip hop, Dancehall, Afrobeat and more, they tell stories of first- and second-generation immigrants, navigating Canadian culture and facing questions of identity and belonging. Audiences are taken on an emotional journey through curiosity, struggle, and love.

According to legend, the roots of Highland dance go back centuries, with warriors imitating epic deeds from Scottish folklore. Today, nothing captures the spirit of Scottish culture better than a Highland dancer gracefully performing to the bagpipes. Shot of Scotch Vancouver showcases the athleticism, stamina and artistry this form requires, emphasizing precise footwork, timing and technique, with an exhilarating selection of traditional dances and contemporary Highland dance choreographies.

One of Vancouver’s leading exponents of the exquisitely beautiful classical Indian dance style of bharata natyam, Sujit Vaidya also creates work which reflects a modern sensibility and pushes the boundaries of the form. This stimulating presentation will highlight the roots of bharata natyam and its ongoing evolution, featuring classical dances as well as a duet created by contemporary choreographer Alvin Erasga Tolentino, exploring a dance language that transcends tradition.

Presented with the support of Scotiabank

A day of free open classes, workshops, studio showings and events featuring a host of different dance styles, at Canada’s flagship dance facility. Full schedule of events to be announced.

Tickets suggested $10 donation at the door

Co-founder of the innovative emerging collective TWObigsteps, Marissa Wong examines the impact of trauma in her new solo, reclaiming courage and fortitude through dance. The program also includes a collaboration between her fellow collective members Katie Cassady and Stéphanie Cyr.

The 12 Minutes Max series supports the development of innovative new works lasting twelve minutes or less. Three times per season a rotating panel of guest curators will select up to four artists who will develop their works in the studio, followed by public studio showings. Artists and showing dates will be announced throughout the year. A selection of the works will be presented in performance on June 12, 2020.

Led by Artistic Director Yvonne Chartrand, V’ni Dansi (‘Come and Dance’ in Michif) is dedicated to sharing the stories and culture of the Métis, through both traditional and contemporary dance. Michif Medicines is a new Indigenous contemporary dance work created through an international collaboration with Santa Fe’s Dancing Earth.

About The Dance Centre Established in 1986 as the resource centre for the dance profession and the public in British Columbia, The Dance Centre has expanded into a multifaceted organization offering a range of activities unparalleled in Canadian dance. It presents performances and public events; provides programs, resources and support for dance professionals; operates Scotiabank Dance Centre, one of Canada’s flagship dance facilities; and works to promote BC dance.

The Dance Centre gratefully acknowledges the financial support of the Province of British Columbia, the BC Arts Council, Canada Council for the Arts, the Government of Canada, and the City of Vancouver through the Office of Cultural Affairs.