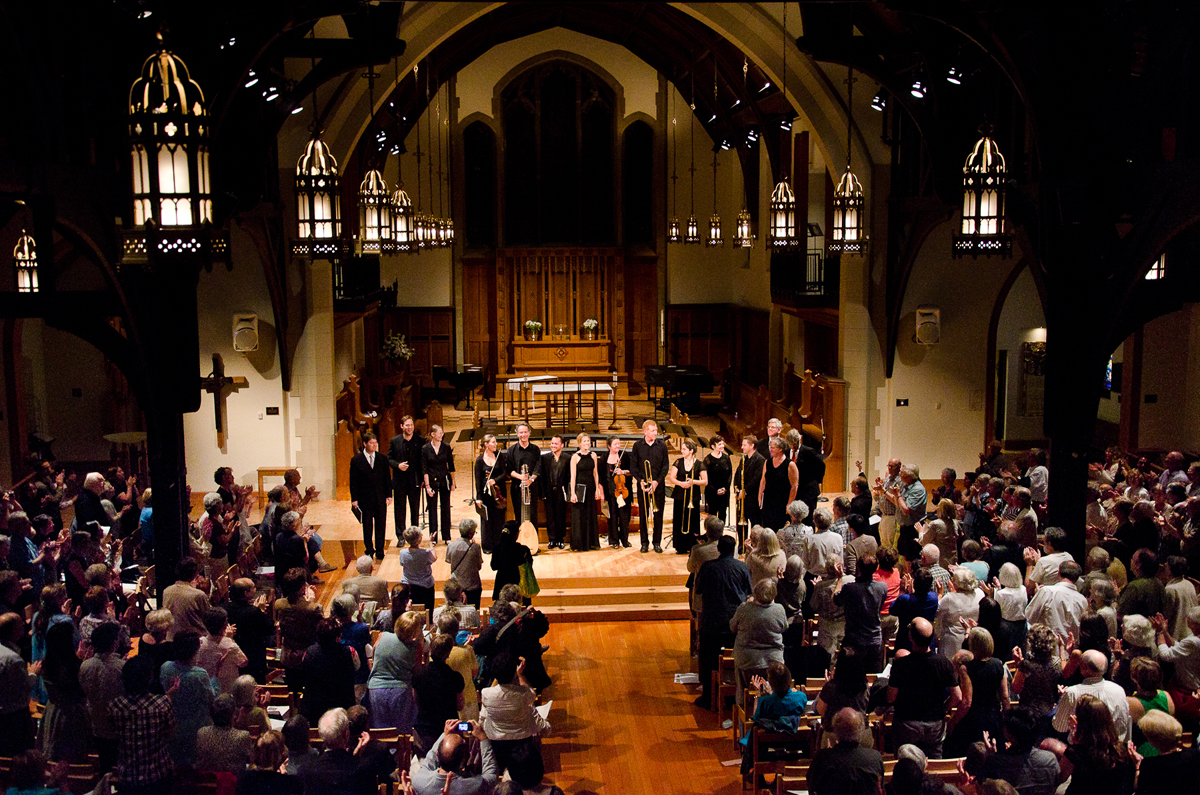 Early Music Vancouver (EMV) proudly presents the return of the Vancouver Bach Festival, July 30 – August 9, 2019 at Christ Church Cathedral and the Chan Centre for the Performing Arts. This year’s festival celebrates EMV’s 50th anniversary with performances by many of the top West Coast artists specializing in period performance, as well as gifted artists from across Europe and North America. EMV is particularly delighted to welcome Montreal’s internationally acclaimed Ensemble Les Boréades to participate in their second annual ensemble-in-residence program, which will see members of the ensemble perform in multiple concerts throughout the festival.

“For our 50th anniversary we have spared no expense in order to bring our audiences a truly world-class offering of some of the finest artists working in period performance today,” says Matthew White, Executive and Artistic Director of EMV. “I think the personal, aesthetic, and intellectual connections one can make during a festival are the happy result of a ‘total immersion’ — multiple events in a shorter window of time provide a perspective and engagement that is otherwise near impossible to achieve. By offering concerts from a wide range of exciting composers like Strozzi, Shostakovich, Purcell, Faure, Poulenc, Chopin, Handel, Mozart, and of course, Bach, the opportunities to explore links and parallels are limitless.”

The 14-concert festival commences with EMV’s ensemble in residence, Les Boréades, in a spectacular two-night performance of J.S. Bach’s Complete Brandenburg Concertos. The Vancouver Bach Choir will also partner with the festival for the first time to perform a programme featuring Faure’s beloved Requiem with a professional core of twenty of the region’s best professional singers, accompanied by award-winning organist Christina Hutten.

Further highlights include the return of audience favourite soprano Amanda Forsythe with Pacific MusicWorks, in a performance of Handel’s early cantatas, as well as sopranos Suzie LeBlanc and Dorothee Mields’ dramatic interpretations of female composer Barbara Strozzi’s 17th century musings on love and loss. This year, the Vancouver Bach Festival also boasts a record number of partnerships with organizations including the Vancouver Chopin Society, the Pacific Baroque Orchestra (PBO), Pacific MusicWorks, and the Vancouver Bach Choir.

J.S. Bach (1685 – 1750) is regarded as one of the greatest composers in Western musical history. His legacy includes some of the most beautiful and well-crafted music ever written. Almost three centuries after Bach’s passing, his vast catalogue of works is still revered, studied, and reinterpreted by music lovers across the globe. More than any other classical composer, he has almost universal recognition and appeal across all musical genres. Bach is the perfect ambassador in the broader musical community for all classical music in that he represents the pinnacle of music that came before him, and is an undeniable inspiration for all composers who followed.

Part 2 – Bach Complete Brandenburg Concertos with Les Boréades
July 31 at 7:30pm (Pre-concert talk at 6:45pm)
Join Montreal’s Ensemble Les Boréades, led under the baton of music director Francis Colpron, for two performances of the complete concertos performed over two nights alongside lesser-known orchestral works from the Baroque era. The six Brandenburg Concertos are universally regarded as some of the greatest musical works ever written. Full of joy and almost unfathomable creative genius, Bach sent the scores to the Margrave of Brandenburg, Christian Ludwig, in Berlin on March 24, 1721 as a sort of audition portfolio. Though Bach never heard back, the music was preserved in the Brandenburg archives and quickly became some of the most beloved and oft-played collections of orchestral music of all time. The first evening will showcase revered horn player Alexis Basque, and internationally renowned violinist Olivier Brault.The second evening will feature award-winning Canadian harpsichordist Mark Edwards.

Bach Sonatas and Chamber Music
July 31 at 1pm (Pre-concert talk at 12:15pm)
Delight in Ensemble Les Boréades’ performance of virtuosic chamber music by J.S. Bach arranged for violin, various flutes, recorder, gamba, and harpsichord. The evening will also include a performance of the Ciaccona from the partita no. 2 in D minor for solo violin, played by one of North America’s greatest Baroque violinists, Oliver Brault.

Chopin Preludes featuring Byron Schenkman, fortepiano
A collaboration with the Vancouver Chopin Society
August 1 at 1pm (Pre-concert talk at 12:45pm)
Byron Schenkman, hailed as “an elegant stylist with a clearly articulated sound” (New York Times), will play this concert on EMV’s 19th century Broadwood. Frederic Chopin was a central figure of 19th century Romanticism, but his connections to Bach are clear in his own preludes, which were directly inspired by Bach’s The Well-Tempered Clavier. This programme also places Chopin’s music in the context of Romantic composers who influenced his work, including the great Polish pianist Maria Szymanowska and the composer/critic Robert Schumann.

Faure Requiem with Vancouver Bach Choir
August 1 at 7:30pm (Pre-concert talk at 6:45pm)
For EMV’s first collaboration with the Vancouver Bach Choir, the singers of this illustrious choir join twenty of the finest professional choral singers in the Pacific Northwest for a performance of Faure’s uplifting Requiem and Cantique de Jean Racine. The first half will focus on unaccompanied performances of works by other important French composers, including a full performance of Poulenc’s Mass in G led by Kathleen Allan. The second half of the evening features the Requiem performed by the combined choirs led by Les Dala.

Mozart String Trios featuring Mozart’s Eb Major Divertimento
August 2 at 1pm (Pre-concert talk at 12:45pm)
Join Vancouver violinist Marc Destrubé, along with Joanna Hood (viola,) and Tanya Tomkins (cello) for a magnificent performance of Mozart’s substantial and complex six-movement Eb Major Divertimento, a composition described by Albert Einstein as “one of his noblest works.” Mozart’s writing for string trio in this Divertimento shows consummate mastery, giving the three instruments equal importance, and playing with all the possibilities of varied texture and colour. Much of the music exemplifies that unique Mozartean quality of mysteriously combining cheerfulness with melancholy, and sadness with humour.

Bach Clavierübung III – the Organ Mass featuring Alexander Weimann at 1pm
August 6 at 1pm (Pre-concert talk at 12:45pm)
For the first organ recital programme ever as part of the Vancouver Bach Festival, Vancouver’s organ virtuoso Alexander Weimann plays excerpts from this collection, including the Prelude, Fugue in E♭ majorand BWV 552. The Clavier-Übung III is the third part of J.S. Bach’s collection, and is often referred to as the German Organ Mass, featuring a collection of compositions for organ started in 1735–36 and published in 1739. It is widely considered Bach’s most significant and extensive work for organ, containing some of his most musically complex and technically demanding compositions for this instrument.

Palestrina, Monteverdi & More: Song of Songs
August 6 at 7:30pm (Pre-concert talk at 6:45pm)
The ancient Song of Songs originated as erotic love poetry around 2500 years ago. It was interpreted by both Judaism and Christianity as an allegorical understanding of the believer’s relationship with God. In Christianity, musical settings of the text became particularly popular in 16th and 17th Centuries, when word expression and moving the listener became increasingly important. This concert features five of the world’s best vocal soloists specializing in the vocal chamber music of the 17th and 18th centuries. The programme is designed and led by counter-tenor Alex Potter, and includes music by Schütz, Monteverdi, Guerrero, Morales, and more.

Before Bach: 17th Century Music for Early Strings and Winds
August 7 at 1pm (Pre-concert talk at 12:45pm)
In the early Baroque era, the Austrian Habsburg courts at Graz and Vienna were a cauldron for a rich stew of German and Italian music. In this programme featuring Austrian instrumental music of the early Baroque, West Coast chamber ensemble La Modestine, early music brass ensemble Cappella Borealis, and special guest vocalists join forces to explore Habsburg music from both sides of the Alps, including motets, canzonas, and sonatas.

Handel Early Cantatas featuring Amanda Forsythe, soprano
August 7 at 7:30pm (Pre-concert talk at 6:45pm)
This exceptional concert features the return of internationally acclaimed soprano Amanda Forsythe with Pacific MusicWorks, led under the direction of Stephen Stubbs. The programme includes Handel’s Armida Abbandonata, which was part of J.S.Bach’s personal library. At age 19, Handel set off for Italy — the center of the 18th century musical universe — to find fame and fortune. It was in Rome where Handel worked with important musicians of the time and composed some of his most dramatic, virtuosic, and exciting works.

Shostakovich Preludes featuring David Jalbert, piano
August 8 at 1pm (Pre-concert at 12:45pm)
Montreal’s David Jalbert, hailed as a pianist who “dazzles with skill, style, and taste” (Toronto Star), will perform one of the 20th century’s greatest sets of compositions for the piano. Following the example of J.S. Bach in setting one prelude and one fugue in each of the 12 major and minor keys of the modern Western scale, Shostakovich’s compositions offer a staggering range of styles, ideas, and counterpoints. This is beautiful music that goes from quiet noodlings to full-scale keyboard assaults. Jalbert, as demonstrated in his 2008 recording for ATMA Classique, is capable of mesmerizing across the whole range.

Strozzi – 17th Century Divas featuring Suzie LeBlanc and Dorothee Mields, sopranos
August 8 at 7:30pm (Pre-concert talk at 6:45pm)
This concert celebrates Barbara Strozzi’s 400th anniversary with a programme of sensual and playful arias and duets performed by two of the greatest interpreters of 17th century vocal music living today. Being published in one’s lifetime was a great accomplishment for composers of the 17th century — especially if you are a woman! Remarkably, Strozzi published eight collections of exquisite arias and madrigals on the familiar subject of love gone wrong that are of a similar, superlative standard to those of her contemporary Claudio Monteverdi.

Purcell Hail Bright Cecilia
August 9, 2019 at 7:30pm (Pre-concert at 6:45pm) at the Chan Centre
Alexander Weimann leads the PBO and six internationally-renowned soloists in a dramatic reading of this celebratory work. Comprised of masterful instrumental sections, majestic choruses, and varied solos, duets and trios, this masterpiece serves as a fitting close to the Vancouver Bach Festival. The last and greatest of Purcell’s four Odes to the Christian saint, Hail! Bright Cecilia was composed to a text by Nicholas Brady in 1692 in honour of the feast day of Saint Cecilia, patron saint of musicians. This work reveals the unparalleled richness of the composer’s musical invention and explains why more than three hundred years later, Henry Purcell is still regarded as one of the Baroque period’s greatest composers.

All concerts at Christ Church Cathedral unless otherwise noted.

To complement the artist lineup, EMV will offer an array of thought-provoking film screenings and expert talks, which audiences can enjoy with wine and refreshments in a relaxed atmosphere. To learn more, please visit: earlymusic.bc.ca/education-community/free-documentary-screenings/

Enjoy any four concerts at the Vancouver Bach Festival for the price of three. Purchases of more than four concert packages will also receive a 25% discount.