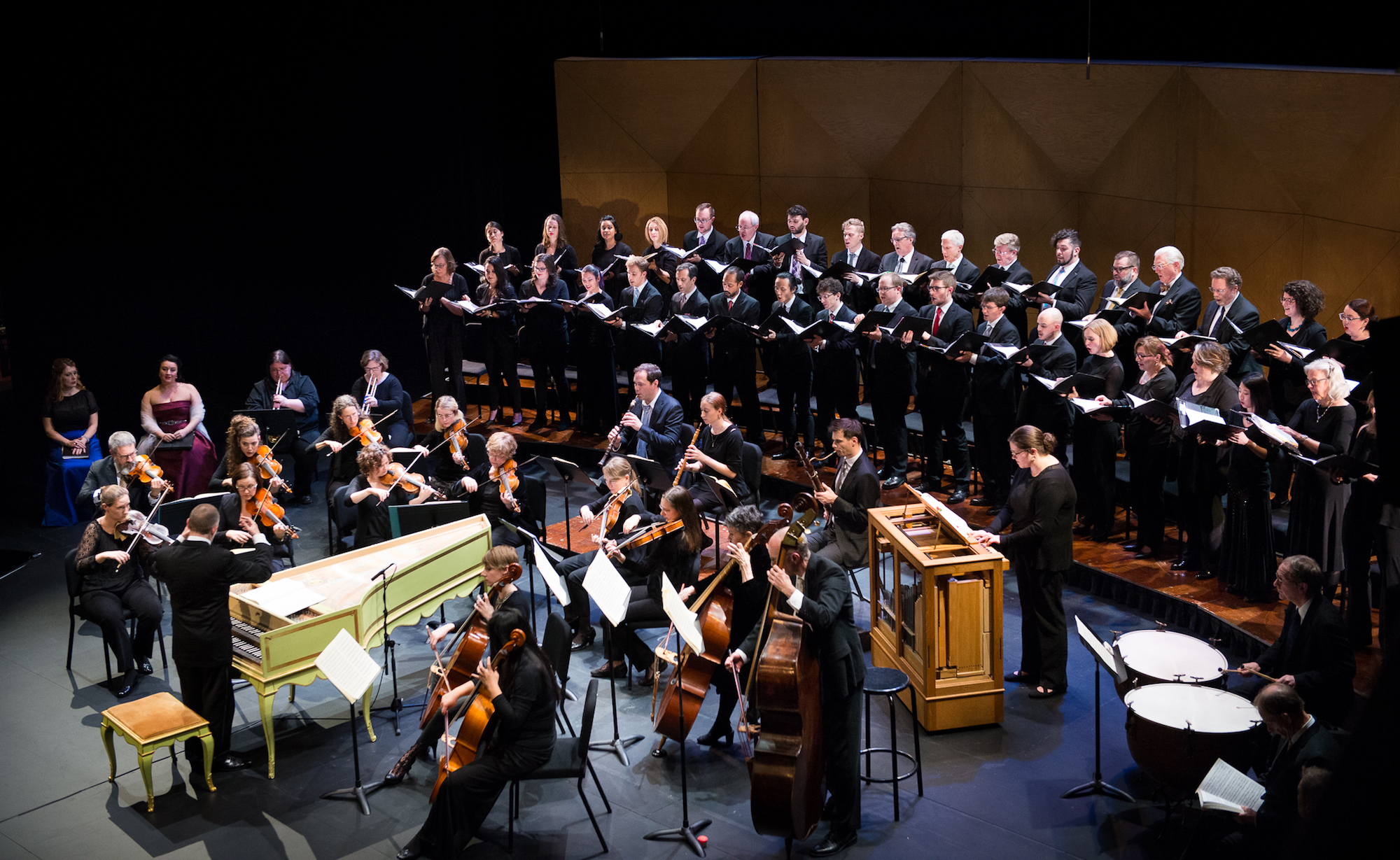 Early Music Vancouver (EMV), in collaboration with the Pacific Baroque Orchestra (PBO) and the Vancouver Cantata Singers (VCS), presents Handel Coronation Anthems on April 14, 2019 at 3pm at the Chan Centre for the Performing Arts. Esteemed conductor and organist Alexander Weimann leads the PBO, VCS, and four internationally renowned soloists in a spectacular large-scale performance of two Handel masterpieces: Coronation Anthems and Ode for the Birthday of Queen Anne.

“Mozart said of Handel that he ‘understands effect better than any of us — when he chooses, he strikes like a thunderbolt.’ This was my experience on hearing the Coronation Anthems for the first time,” says Matthew White, Executive and Artistic Director of EMV. “For centuries, these joyful works have brought audiences to their feet. I can think of no better way to end PBO’s 2018–19 season and reveal our exciting plans for EMV’s celebratory 50th anniversary.”
In one of his last undertakings before his death in 1727, King George I signed the ‘Act for the naturalizing of George Frideric Handel.’ One of Handel’s first tasks as a naturalized British citizen was to write the music for the coronation of the new monarch King George II and his wife Queen Caroline that was to take place later that year. The forces he used were substantial for the period: an augmented Chapel Royal Choir of 47 vocalists and an orchestra that likely numbered more than 90 musicians.

The coronation took place in Westminster Abbey on October 11,1727. Though Maurice Greene, the recently appointed organist and composer to the Chapel Royal, should have been asked to provide the music for the occasion, King George, a German from the royal house of Hanover, insisted that his favourite German musician and current star of the London operatic scene, Handel, write the music instead. This decision created an understandable rift between the two composers. History, however, has proven the King made the right choice — Handel’s Coronation Anthems are among his most beloved and universally acknowledged masterpieces. Like his Messiah, these works are now permanently associated with Britain’s international brand, despite being written by a German.

Since their successful debut, Handel’s Coronation Anthems have remained at the heart of the favoured English Baroque repertoire. Handel’s setting of Zadok the Priest, the first of the four anthems, has been included at every British coronation since 1727. The long instrumental opening of this work remains one of music history’s greatest examples of how to build anticipation and tension.

EMV’s programme will also include a performance of Handel’s festive Ode for the Birthday of Queen Anne. This earlier work was written in 1713 and honours both Queen Anne’s birthday and the celebration of the Treaty of Utrecht that finally ended the War of Spanish succession in 1712. Scored for three solo voices, choir, and orchestra, it begins with one of Handel’s most beloved and famous solos Eternal Source of Light Divine, featuring the trumpet and the alto voice. Millions of people all over the world heard this piece during the Royal Wedding of Prince Harry and Meghan Markle in May 2018.

The all-star vocalists will be accompanied by Vancouver’s own Juno-nominated Pacific Baroque Orchestra (PBO) led by acclaimed music director and harpsichordist Alexander Weimann. Formed in 1990, the PBO is universally recognized as one of Canada’s best orchestras playing on period instruments.

In addition to sharing Handel’s magnificent works, EMV looks forward to announcing its captivating 2019–20 season at the beginning of the concert at the Chan Centre.

About the Pacific Baroque Orchestra (pacificbaroque.com)
The Pacific Baroque Orchestra (PBO) was formed in 1990 by a group of dedicated musicians who shared a passion for performing baroque and early classical music. In 2009, PBO welcomed Alexander Weimann, one of the most sought-after ensemble directors, soloists, and chamber music partners of his generation, as Music Director. Weimann’s imaginative programming and expert leadership have drawn in many new concertgoers, and his creativity and engaging musicianship have carved out a unique and vital place for the orchestra in the cultural landscape of Vancouver. In addition to continuing its own annual Vancouver-based series, the orchestra is doing an increasing amount of touring and recording. In 2019, the orchestra will play all over North America. Highlights include invitations to play at Koerner Hall in Toronto, Salle Bourgie in Montreal, Jordan Hall in Boston for the Boston Early Music Festival, and at Town Hall for Early Music Seattle.

About the Vancouver Cantata Singers (vancouvercantatasingers.com)
Vancouver Cantata Singers (VCS) was founded in 1957, and has become one of Canada’s preeminent, award-winning choral ensembles. The Vancouver Cantata Singers has become known for technical virtuosity, fine blend, and exceptionally high performance standards encompassing 500 years of choral repertoire. VCS has been awarded the Canada Council’s top prize in choral singing, the Healey Willan Grand Prize, more than any other choir in the country. Led by Paula Kremer since 2013, VCS also commissions new works from critically acclaimed composers, which have led to extremely successful and innovative collaborations with regional and international artists and ensembles.

About Early Music Vancouver (earlymusic.bc.ca)
For more than 45 years, Early Music Vancouver (EMV) has dedicated itself to fostering an understanding and appreciation of musical treasures from the Renaissance, Baroque, and Classical periods. Currently under the leadership of Matthew White — renowned countertenor and founding director of the Québec-based ensemble Les Voix Baroques — EMV continues to garner international acclaim as the largest presenter of early music in Canada, and as one of the most active and innovative organizations in its field in North America. EMV is proud of its educational outreach initiatives that include its popular summer Vancouver Bach Festival, a new Baroque Mentorship Orchestra, community lectures, and instrument instruction and preservation.