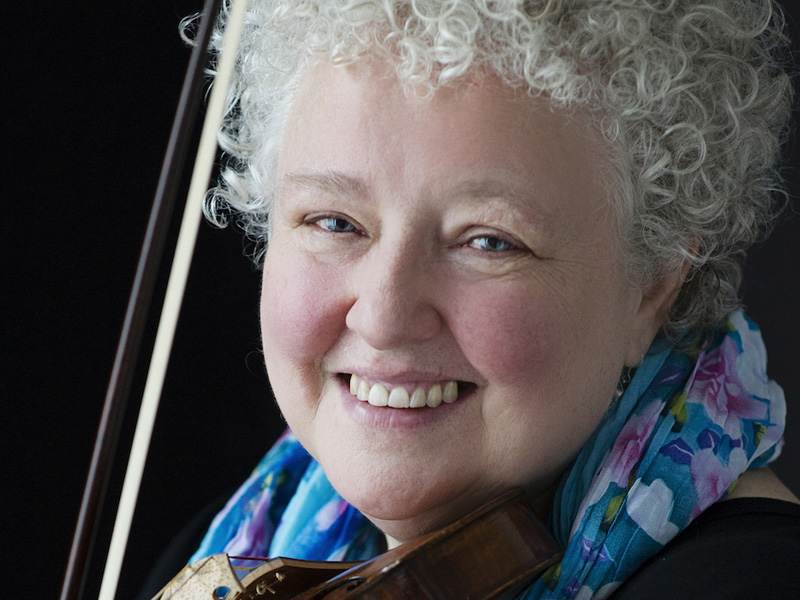 Monica Huggett Leads All-Female Ensemble of Baroque Specialists,
Giving Audiences the Chance to Hear These Works As They Were Originally Conceived

Early Music Vancouver (EMV) is proud to present Festive Cantatas: Vivaldi’s Gloria and Magnificat on December 23, 2017 at 7:30pm at the Chan Centre for the Performing Arts. For this year’s edition of the holiday tradition, EMV will bring together many of the West Coast’s leading female instrumentalists specializing in baroque music on period instruments to share these well known works. The gathering reflects how the repertoire was first conceived and performed in early 18th century Venice. The concert will feature internationally acclaimed and fiery music director, Monica Huggett, who will lead the all-female ensemble from the violin and refresh these beloved classics by revisiting their roots.

“Much of Vivaldi’s sacred music was written for performance at an orphanage for girls in Venice where all of the performers, except for Vivaldi, were women”, says Matthew White, EMV’s Executive and Artistic Director. “The fact that it is now possible for us to put together a performance of this quality made up almost entirely of exceptionally talented women residing on the West coast, and led by a female conductor of Monica Huggett’s stature, is evidence of how far the period instrument movement has come over the last decade. Hearing these works as they were originally written will help our audiences discover them as if they were experiencing them for the first time.”

For much of his career, Antonio Lucio Vivaldi was a violin teacher and the musical director of L’Ospedale della Pietà, an orphanage for girls in Venice. Many of his best-known choral works, like Gloria and Magnificat, were composed for the female students who lived there. To make this work he arranged all of the four-part vocal music so that women could sing even the lowest parts. By all accounts, Vivaldi’s orchestra at the Pietà was extraordinarily skilled, and like the choir was also made up entirely of women. As is clear from the challenging instrumental music that Vivaldi wrote at this time, he must have had virtuosic players of all of the standard baroque orchestral instruments at his disposal. The two double concertos on our program, the Concerto in D major RV 563 for solo trumpet and the Concerto for Oboe and Violin in B flat major RV 548 are both beautiful examples of the work he wrote for these talented young people.

The December 23 program includes three of Vivaldi’s most loved and often-performed choral works that are better known in their standard Soprano, Alto, Tenor and Bass arrangements. Though Laetatus Sum, Magnificat, and Gloria are all standards of the mixed choir classical repertoire, as Matthew White explains, at the original performances, the “tenor and bass parts were sung by women with low voices, either at a notated pitch or as in our performance, transposed up an octave.” This creates a refreshing rebalancing of harmony that makes these familiar works seem almost like new.

EMV is particularly excited to welcome the return of audience favourite, British-born violinist and conductor Monica Huggett to serve as Musical Director of this version of Festive Cantatas. Ms Huggett is one of the world’s foremost baroque violinists and performs internationally as a soloist, director, chamber musician, and recording artist. She is a Fellow of the Royal Academy of Music in London, a founder/director of Ensemble Sonnerie, which tours extensively in Europe and the U.S., and Artistic Director of the Portland Baroque Orchestra in Oregon.

Vivaldi’s works for his world famous all-female ensemble, along with his other compositions, disappeared after the composer’s death in 1741 and were believed to be lost until their accidental discovery in the 1920s. Modern audiences were first introduced to them in the 1950s, much later than other leading Baroque composers such as Handel or Bach. Nonetheless, Vivaldi’s music fascinated modern audiences and he quickly became one of the most performed and recorded composers in history. EMV hopes Vivaldi fans will enjoy this take on how this revered music might have sounded when it was brand new.

ABOUT EARLY MUSIC VANCOUVER (earlymusic.bc.ca)
For 45 years, Early Music Vancouver (EMV) has dedicated itself to fostering an understanding and appreciation of musical treasures from the Renaissance, Baroque, and Classical periods. Currently, under the leadership of Matthew White – renowned countertenor and founding director of the Quebec-based ensemble Les Voix Baroques – EMV continues to garner international acclaim as the largest presenter of early music in Canada, and as one of the most active and innovative organizations in its field in North America. EMV is proud of its educational outreach initiatives that include its popular, annual summer festival at UBC’s School of Music; a new Baroque Mentorship Orchestra; community lectures; and instrument instruction and preservation.