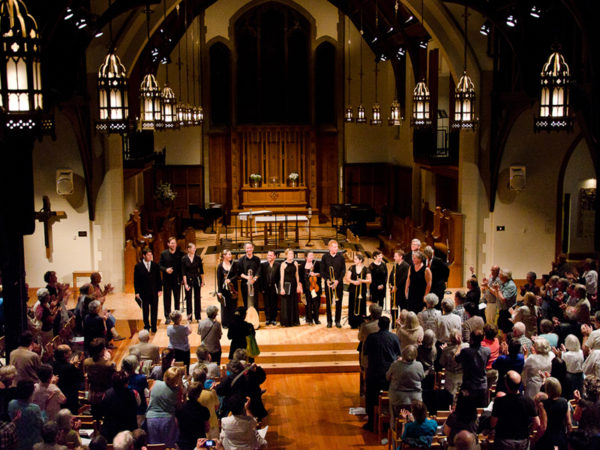 Early Music Vancouver (EMV) is proud to present the culmination of the 2018 Vancouver Bach Festival with Bach – Trauer Ode (BWV 198) and Wir müssen durch viel Trübsal (BWV 146) on August 10, 2018, at 7:30pm at the Chan Centre for Performing Arts. Renowned conductor and organist Alexander Weimann leads this performance featuring the internationally renowned soloists of Gli Angeli Genève and the instrumentalists of the Pacific Baroque Orchestra in dramatic readings of two of J.S. Bach’s most richly scored cantatas.

“For many years, EMV has presented the annual Festive Bach Cantatas for Christmas, providing audiences with the opportunity to enjoy almost all of Bach’s works written for this special season,” says Matthew White, Executive and Artistic Director of EMV. “Since the start of the Vancouver Bach Festival in 2016, however, we have begun to explore more of the cantatas written for other periods of the liturgical year, as well as for secular performance. The two works on this exciting programme are widely accepted to be rarely performed masterpieces that demonstrate Bach’s unparalleled ability to mirror and augment the power of a given text through music. Though the great Passions, Oratorios and Masses are the best known of Bach’s works for choir and orchestra, the Cantatas represent a treasure trove of some of his most inspired music.”

The first half of the programme features Cantata 146 (Wir müssen durch viel Trübsal). Composed in 1726, it is a meditation on Jesus’ farewell message and the gospel text for Jubilate Sunday, which is the third Sunday after Easter. The text reads: “Very truly I tell you, you will weep and mourn while the world rejoices. You will grieve, but your grief will turn to joy.” The juxtaposition of the sorrows of mortal life and the comfort offered by faith and the hope of heaven characterize this entire cantata. Following the sorrow of the opening chorus, the pendulum swings to emphasize joy, shadowed by worldliness painted with dark harmonies in the alto aria proclaiming “I would go to heaven”, then back again in the agitated soprano recitative and aria exclaiming “I sow my tears with an anxious heart”. Strikingly pairing the sweet mellowness of the flute with the dark, mournful timbre of two oboes d’amore, this aria expresses such intense suffering that hope for future union with God becomes a longing for death. This dance inspired tenor and bass duet transports us back to the realm of rejoicing, and the cantata is summed up with a simple chorale verse. Two movements of this cantata re-use musical material from Bach’s Harpsichord Concerto in D Minor.

This work was composed during a period when Bach was responsible for preparing the weekly music for Leipzig’s four main churches. In a feat of ambition, creativity and discipline unmatched in musical history, during the first three years of his tenure as the Cantor in Leipzig, Bach created a unique masterpiece on a weekly basis. His three full cycles of cantatas number roughly 200 unique works and cover all 59 Sunday services and special feast days of the liturgical year.

Cantata 198, also known as The Trauer Ode or Mourning Ode, is a large-scale secular cantata for orchestra and soloists, composed in 1727 for the funeral of the beloved Saxon Electoress and Polish Queen, Christiane Eberhardine. One of Bach’s most critically lauded and beloved works, The Trauer Ode was written to honour the Queen’s role as “protector of the Lutheran faith” despite her husband’s conversion to the Catholic Church. The text, written by Johann Christoph Gottsched, is a lament, praising and memorializing the electoress, and consoling her loyal subjects. Bach brings this text vividly to life by using an unusually varied orchestration of flutes, oboes d’amore, violas da gamba, parts for solo lutes and continuo.

These all-star vocalists will be paired with Vancouver’s own Juno-nominated Pacific Baroque Orchestra (PBO), led under the baton of acclaimed Music Director Alexander Weimann. Formed in 1990, the PBO is recognized as one of Canada’s most exciting and innovative ensembles that bring the music of the past up to date by performing with cutting-edge style and enthusiasm. These combined forces at the Chan Centre will perform what promises to be a truly captivating finale of the 2018 Vancouver Bach Festival.