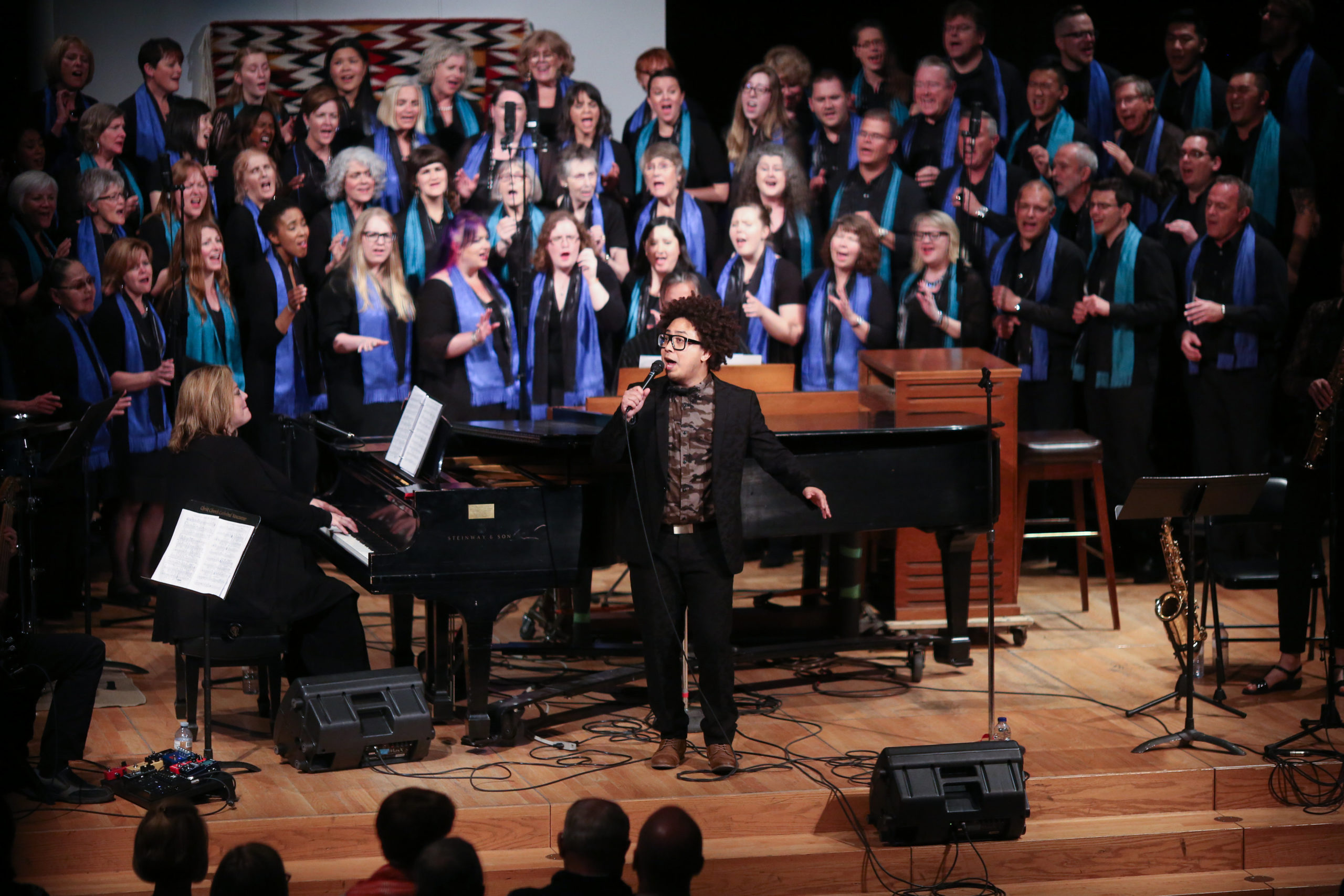 Good Noise Vancouver Gospel Choir (Good Noise) presents what promises to be the blockbuster concert of the season with, The Return of Soul Gospel, May 25 at 3pm and 8pm at Christ Church Cathedral. Following two previous Soul Gospel concerts, Good Noise will be joined by award-winning gospel singers Dawn Pemberton and Warren Dean Flandez in an exuberant celebration of gospel music filled with high energy praise songs that will have audiences raising the roof with pure joy and adoration.

“Our 15th season has been nothing short of spectacular,” says Gail Suderman, Artistic Director of Good Noise. “We decided to celebrate our success by bring together two of Canada’s most powerful gospel singers as guest artists for our grand finale. Dawn and Warren don’t get the chance to sing together very often, so to have them both available was a minor miracle, given their very busy performing schedules — and having them both on stage along with Good Noise and the Good Noise gospel band will be exhilarating beyond belief. The Return of Soul Gospel will be a concert like no other and audiences for these two performances will be on their feet singing right along with us!”

Stirring gospel songs fill this incredible concert with high energy music that will highlight Flandez and Pemberton’s soulfully charged voices. Good Noise, Pemberton, and Flandez will join forces in breathtaking performances of the Reverend Al Green’s “Everything’s Gonna be Alright,” Stevie Wonder’s inspirational “Love’s In Need of Love Today” from his iconic album Songs in the Key of Love, and finally Gail Suderman’s unique arrangement of “Put a Little Love in Your Heart” inspired by the Al Green/Annie Lennox performance. Solo sets will be offered by both Pemberton and Flandez, and Good Noise will then perform classic gospel songs including “Lean on Me,” by Bill Withers, “Hosanna,” by Kirk Franklin, and “Souled Out” by contemporary gospel artist Bishop Hezekiah Walker who is the pastor of the prominent Brooklyn megachurch, Love Fellowship Tabernacle.

Award-winning, JUNO-nominated Canadian recording artist Flandez describes his music simply as “songs with purpose.” Born in Yellowknife, Flandez grew up singing in the church, steeped in the rich tapestry of gospel music. Flandez has opened for the likes of Joss Stone and the late James Brown. Flandez’s songs have also been featured on the hit television series Being Erica, and campaigns for Abercrombie and Fitch and Hollister. His most recent single, “Born for Greatness” features Riverdale actor KJ Apa.

A winner of the Western Canada Music Awards for her album “Say Something,” Pemberton performs nationally at major festivals and in concerts across the country. Pemberton has deep musical roots that take her immense voice from gospel and soul to jazz, funk and world music. She has become a staple of the Vancouver music scene and can often be found giving it her all as a vocalist, teacher, and facilitator.

ABOUT GOOD NOISE VANCOUVER GOSPEL CHOIR (goodnoisevgc.com)
Good Noise Vancouver Gospel Choir (Good Noise) was founded by Artistic Director Gail Suderman in 2004. Over the years, the choir has been invited to perform alongside acclaimed artists such as Barbra Streisand, Holly Cole, David Foster, Josh Groban, Jim Byrnes, Dee Daniels, and more. The choir is renowned for its upbeat and inspiring annual concert season — garnering many sold out performances. In addition, they have recorded two successful CDs — both of which have been nominated for Covenant Awards (Canadian Gospel Music Awards). Good Noise has also appeared on numerous high-profile television shows on CBC, Bravo, Knowledge Network, Global TV, and most recently in a nationally televised concert on Vision TV.

The 90-voice Good Noise has a membership that includes singers from across the Lower Mainland, from the North Shore to Abbotsford and every town in between. Members of the choir come from a diversity of faith traditions (or none at all) sharing a common love of singing gospel and popular music. Good Noise is currently choir-in-residence at one of downtown Vancouver’s finest historic venues, Christ Church Cathedral.