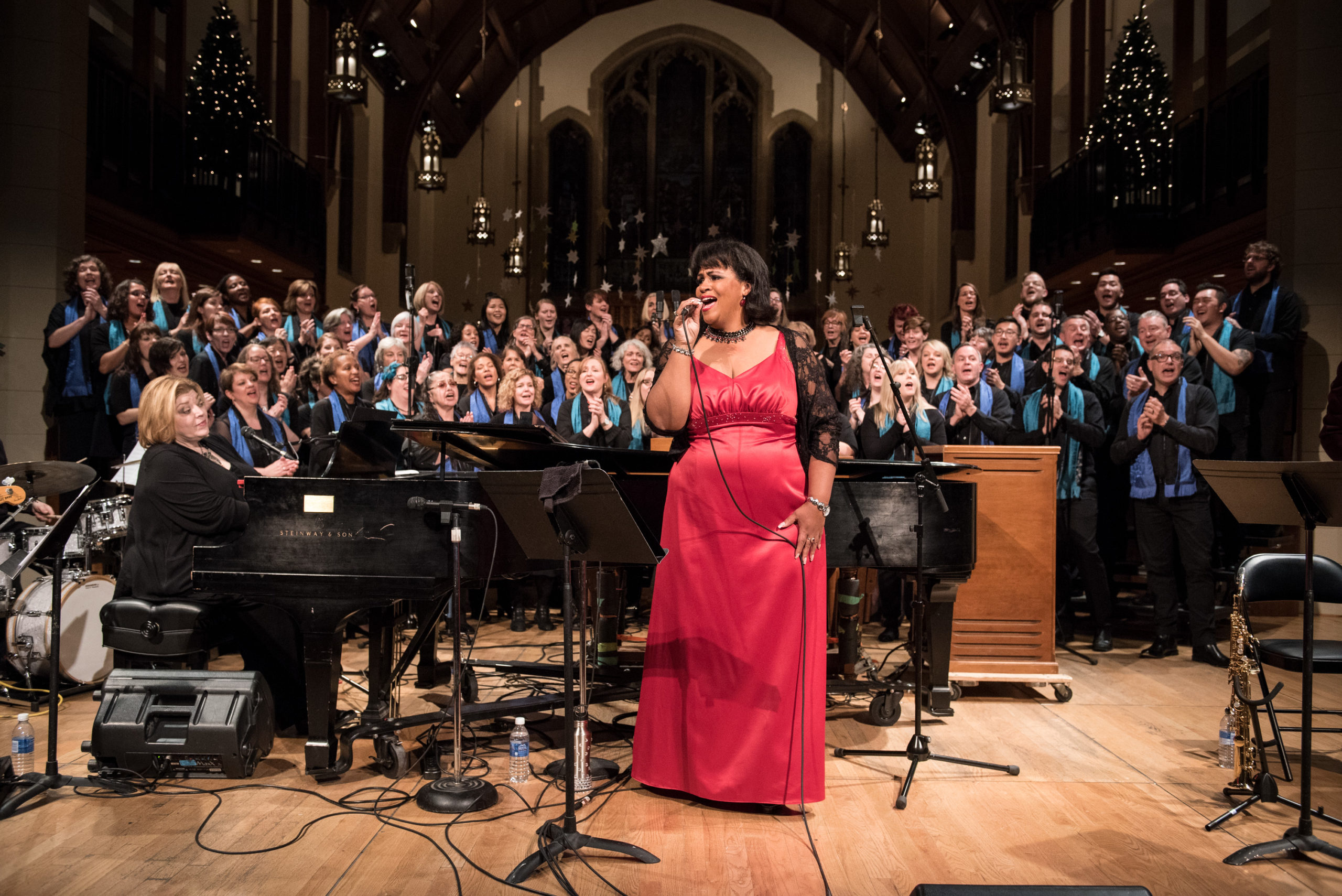 Good Noise Vancouver Gospel Choir (Good Noise) presents their beloved sell-out holiday concert, Good Tidings! A Good Noise Gospel Christmas, December 14 at 8pm & December 15 at 3pm and 8pm at Christ Church Cathedral.For the second year in a row and by popular demand, Good Noise will be joined by critically acclaimed Canadian jazz singer Maureen Washington in a glorious evening of gospel, soul, and jazz Christmas favourites. With infectious energy and deeply felt arrangements, this Good Noise Gospel Christmas will have audiences dancing in the aisles in joyous celebration of the holidays.

“We often hear from our audiences that the Good Noise Gospel Christmas concerts have become part of their holiday traditions, and that friends and family will plan their trips to Vancouver around our annual concert,” says Gail Suderman, Artistic Director of Good Noise. “As we launch our 15th season, we are delighted our 90-voice choir will be joined once again by the brilliant Maureen Washington, who wowed in three sold-out concerts last year with her powerhouse renditions of holiday classics. Surrounded by the iconic beauty of the Christ Church Cathedral and the festive holiday spirit of downtown Vancouver, audiences are in for yet another wondrous treat!”

Holiday hits abound as the concert features a delightful mix of audience favourites in dazzling new arrangements, including a powerfully moving rendition of O Holy Night. Good Noise and Maureen will then join forces in a tribute to Aretha Franklin with a Christmas arrangement of the gospel song, Walk In the Light, featured on both her 1987 gospel album and at her funeral earlier this year. To complete the set list, the choir will perform the vibrant and joyful Amen, written by a pioneer of gospel music, Jester Hairston. Good Noise will also premiere a hand-clapping, foot-stomping arrangement of Everybody Knows it’s Christmas by gospel great Israel Houghton. Returning to the concert stage after thrilling audiences last year will be the Staple Singers classic Who Took the Merry out of Christmas and Joy To The World, in an arrangement made famous by Whitney Houston in the 1996 film The Preacher’s Wife.

Often compared to Etta James and Carmen McRae, Washington stands amongst some of the great female jazz singers of our time and yet her unmistakable vocal prowess across jazz, blues, and gospel are uniquely her own. Named ‘Best Jazz and Soul Artist’ by the Black Canadian Awards, Washington is one of Vancouver Island’s most sought-after vocalists. She has released nine albums, is a captivating BC festival favourite, and has been three-times recognized as ‘Jazz and Blues Artist of the Year’ by Victoria’s Monday Magazine.

Washington is known for her superb performances of jazz, blues, swing, funk, and R&B. The singer’s musical career began in her hometown of Prince George, BC, where she performed in the funk-jazz band BOP. Washington’s captivating voice and charisma has since led her to share the stage with esteemed artists including Miles Black, the Blind Boys of Alabama, Valdy, Ruthie Foster, The Lee Boys, Amy Millan, and more.

ABOUT GOOD NOISE VANCOUVER GOSPEL CHOIR (goodnoisevgc.com)
Good Noise Vancouver Gospel Choir (Good Noise) was founded by Artistic Director Gail Suderman in 2004. Over the years, the choir has been invited to perform alongside acclaimed artists such as Barbra Streisand, Holly Cole, David Foster, Josh Groban, Jim Byrnes, Dee Daniels, and more. The choir is renowned for its upbeat and inspiring annual concert season — garnering many sold out performances. In addition, they have recorded two successful CDs — both of which have been nominated for Covenant Awards (Canadian Gospel Music Awards). Good Noise has also appeared on numerous high-profile television shows on CBC, Bravo, Knowledge Network, Global TV, and most recently in a nationally televised concert on Vision TV.

The 90-voice Good Noise has a membership that includes singers from across the Lower Mainland, from the North Shore to Abbotsford and every town in between. Members of the choir come from a diversity of faith traditions (or none at all) sharing a common love of singing gospel and popular music. Good Noise is currently choir-in-residence at one of downtown Vancouver’s finest historic venues, Christ Church Cathedral.