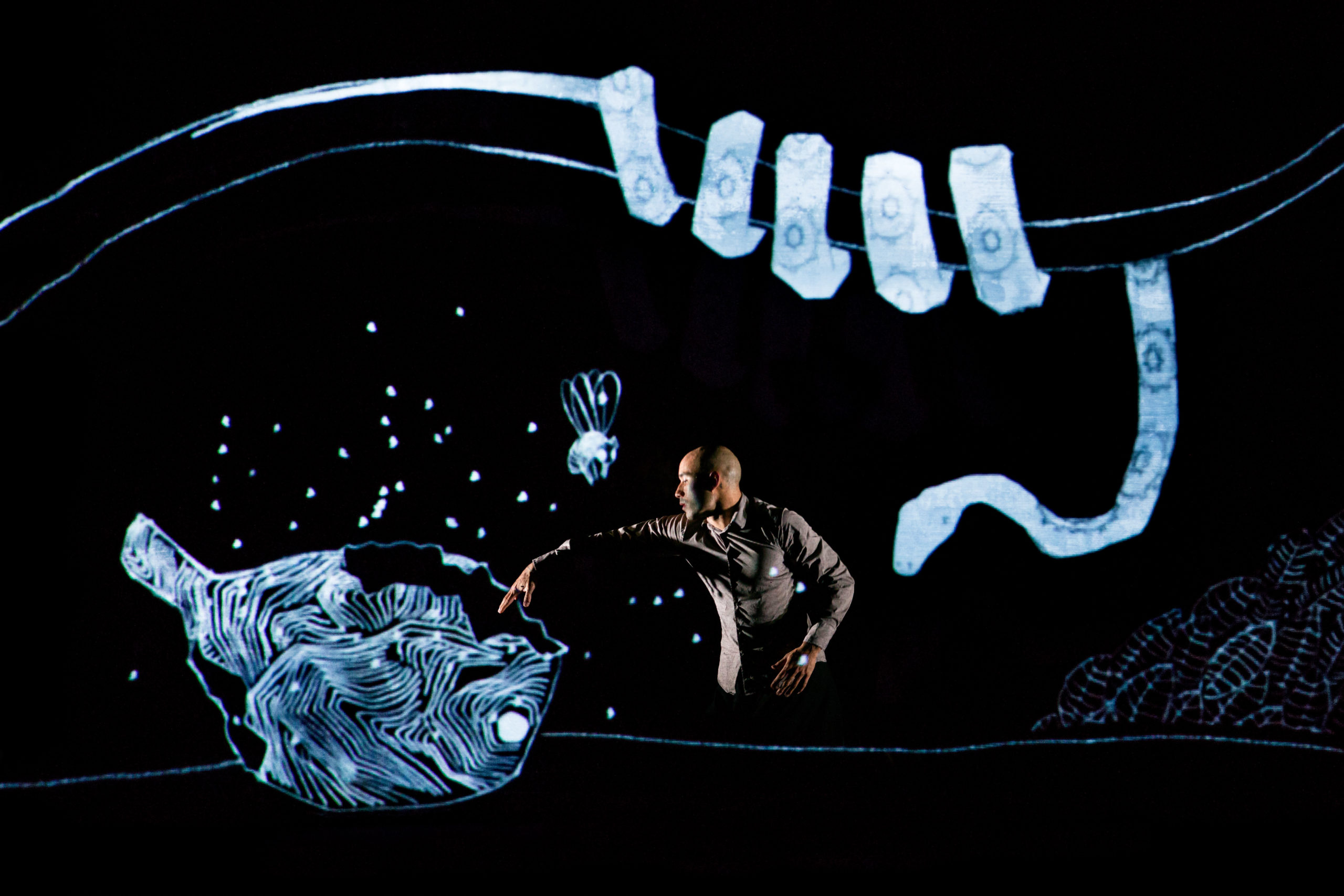 DanceHouse, in co-presentation with SFU Woodward’s Cultural Programs and Théâtre la Seizième, is delighted to announce the anticipated Vancouver premiere of Akram Khan Company’s award-winning solo, Chotto Desh – loosely based on Khan’s childhood raised under the stern eye of his authoritarian father, November 21-24, 2018 at 8pm at the SFU Goldcorp Centre for the Arts.

Performances will be held in French on November 22, 2018 at 8pm and with ASL Interpretation on November 24 at 2pm. Revered UK choreographer Akram Khan and acclaimed children’s theatre Director Sue Buckmaster fuse kathak, storytelling, mime, and interactive animation, to create a bewitching tale of a young man’s dreams and memories growing up in Britain and Bangladesh. This charming work for adults and children ages seven and up, will address the complex relationship between parent and child, as well as timely concepts of home, identity, and belonging in our multicultural world.

“Children are keenly perceptive. They are aware of the growing tensions around immigration and multiculturalism in our society. Therefore, it is crucial that we include youngsters in the conversation so they can navigate these issues with self-awareness and empathy,” says Jim Smith, Artistic and Executive Director of DanceHouse. “Khan and Buckmaster have created an ingenious work that explores this material with humour, compassion, and a luminous humanity. Chotto Desh conjures a shared emotional experience with audiences that dissolves boundaries between generations, cultures and genders, creating a mutual and heartfelt understanding.”

Chotto Desh, meaning ‘small homeland’ in Bengali, was lovingly adapted by Khan and Buckmaster from Khan’s widely acclaimed 2011 autobiographical solo, DESH, which explored Khan’s feelings about cultural identity from an adult perspective. In 2015, the expanded, child-friendly solo premiered to rave reviews at DanceEast in Ipswich, UK. Hailed as an “exquisite gem of dance theatre” (London Dance), Chotto Desh is a magical and heart-warming dance theatre experience replete with an emotionally rich score by Jocelyn Pook and life-sized animations by Tim Yip and Yeast Culture.

By mixing the Indian classical dance form kathak with mime, contemporary dance and hip hop, Khan’s blended cultural identity emerges through his dynamic choreography. His moving solo will be brought to life by the powerful physicality of company dancers Dennis Alamanos and Nicolas Ricchini, who will perform the lyrical and often deeply funny vignettes in the piece on alternate evenings. From a surly teenager practicing Michael Jackson’s crotch-grabs in his bedroom, to a man fully in control of his artistry and destiny – Chotto Desh captures the complex relationship between parent and child, and the pain and joy of growing up with astounding delicacy and beauty.

As an instinctive and natural collaborator, Khan is one of the most respected dance artists in the world.  He co-founded Akram Khan Company in 2000 with Farooq Chaudhry, known for producing thoughtful, provocative, and ambitious dance productions for the international stage. Khan’s inventive and profoundly moving work has been a magnet to leading artists from such diverse cultures and disciplines as the National Ballet of China, actress Juliette Binoche, ballerina Sylvie Guillem, choreographers/dancers Sidi Larbi Cherkaoui and Israel Galván, and singer Kylie Minogue. A recipient of numerous international dance awards, Khan was honoured to receive an Olivier Award for DESH in 2012. An additional highlight of his career was the creation of a section of the Opening Ceremonies for the 2012 Olympic Games in London, which was received with unanimous critical acclaim.

Buckmaster is the Artistic Director of UK’s Theatre-Rites, an internationally lauded company that specializes in experimental theatre for children. She has spent many years working as a director and puppetry specialist for a wide variety of companies including the National Theatre, Royal Shakespeare Company, and the Young Vic. In 2018, she was awarded an honorary doctorate from the University of Essex for her outstanding contribution to theatre.

About DanceHouse (dancehouse.ca)
DanceHouse connects Vancouver audiences and the local arts community to the international world of dance by presenting exceptional companies that are recognized for their excellence, innovation, and international reputation. Since 2008, DanceHouse has presented vibrant and inspiring companies from Canada and around the world. In addition to the performances on stage, DanceHouse offers a suite of engagement opportunities and a chance for the general public and local artistic community to engage with the presented artists and their work.