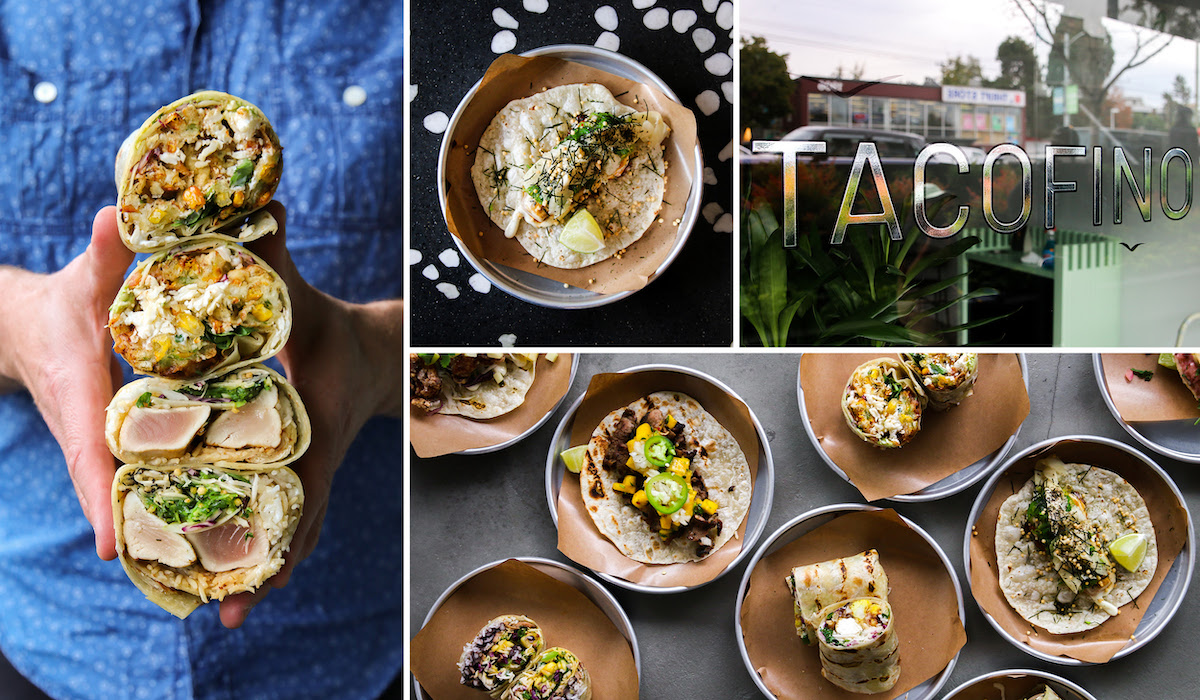 The surf breaks in Kitsilano tomorrow when the BC institution known as Tacofino officially opens the doors of its newest location on the West Side of Vancouver at 1909 West 4th Avenue.

The seventh brick-and-mortar location for the beloved brand, Tacofino Kits occupies 1,985 square feet of space in a belowground, streetside eatery that offers a fully licensed dining room with seating for 40 as well as a take-out counter for those on the go.

Tacofino Kits is the latest addition to a growing family of restaurants that is celebrating 10 years since its humble beginnings in the surfside town of Tofino, BC. A decade later, Tacofino has become a phenomenon thanks to its signature quality, fresh and affordable fare prepared with an environmental and nutritional conscience and laidback, surf-centric style.

In keeping with the brand’s tradition of creating menus that are unique to each location, the Tacofino Kits menu offers a new array of signature, made-from-scratch fare developed by Chef and Co-Owner Jason Sussman and Michelin-starred Regional Executive Chef Stefan Hartmann such as:

‘Other stuff’ and desserts:

Tacofino fans can also quench their thirst at the bar with cocktails like classic lime, jalapeño and blood orange margaritas, the ‘verditarita’, Oaxacan Mule or Paloma for $11 each, pitchers of Tricky sangria for $25, and local craft beer on tap as well as import beer and cider by the can and bottle.

Vancouver interior designer Shiloh Sukkau — who also set the tone of the décor at Tacofino’s Gastown Taco Bar, Yaletown Burrito Bar, Downtown Oasis and Mount Pleasant Ocho locations — made the most of the textures and imperfections of the long and narrow site’s stripped-down concrete shell and incorporated them into a design scheme that is both conceptual and rustic. Subtle nods to the brand’s seaside roots in Tofino can be seen throughout the space in exposed conduit and keyless lamp fixtures that make the shape of a wave barreling over the room and water and natural forms that can be seen in the menus, mirrors, table tops and artwork by Hannah Petkau.

ABOUT TACOFINO KITS | Located in Vancouver’s fashionable Kitsilano district at 1909 West 4th Avenue, Tacofino Kits is the latest addition to a growing family of restaurants that was launched with the opening of the original Tacofino Cantina in Tofino, BC in 2009. Situated in a 1,985-sq.-ft. streetside space, Tacofino Kits offers guests Tacofino’s celebrated surf-centric atmosphere and Baja-by-way-of-West-Coast fare in a fully licensed counter-service space with seating for 40 in addition to a full range of Tacofino-to-go options.