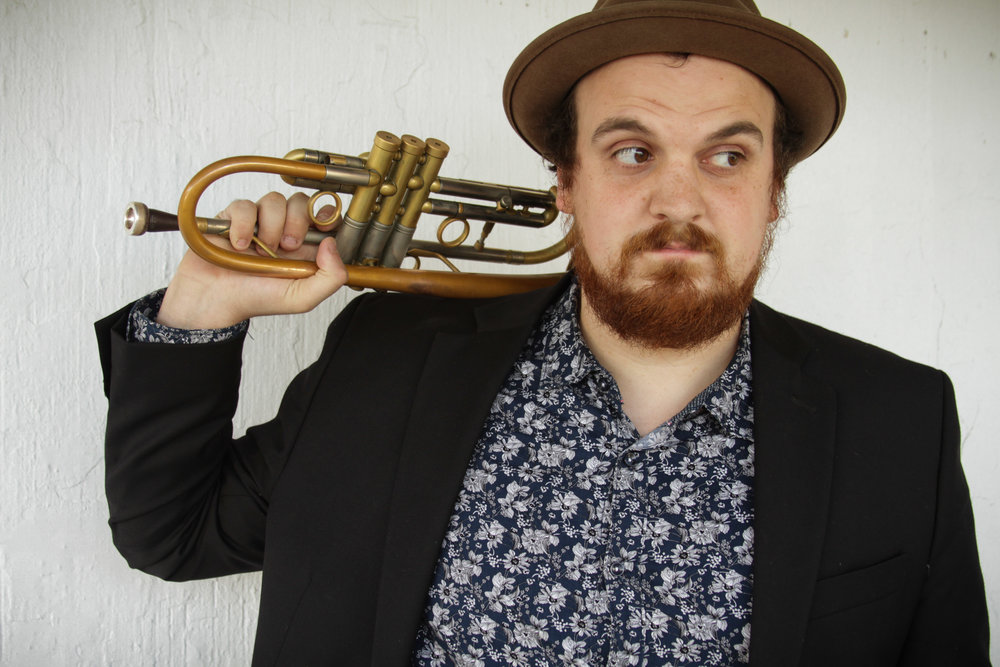 The Fall Lounge Series begins at TYRANT STUDIOS in the heart of downtown Vancouver. Operated by Seven Tyrants Theatre, Vancouver’s Jessie Award-winning independent theatre company, TYRANT STUDIOS is located above the historic Penthouse Nightclub and features a studio theatre as well as a full-service bar and lounge stage.

The Fall Lounge Series will see Seven Tyrants Theatre continue to present weekly entertainment in their full-service Bar and Lounge, offering Vancouver a variety of professional music and comedy shows each week with the following format:

Drummer Nick Bracewell brings his power-jazz trio to Tyrant, playing a mix of originals and covers and exploring the space in between.

NOLA-based trumpeter Jonathan Bauer returns to his West Coast stomping grounds with his critically acclaimed quintet. The JBP plays straight ahead and original jazz, with critics comparing their music to jazz greats Roy Hargrove and Art Blakey. They consistently draw diverse audiences in New Orleans and beyond with their refreshing take on classic sounds.

THE COMIC STRIP LINEUP FOR OCTOBER:

His dry wit, comedic pauses, combined with his intellectual methodology give him a unique style that will leave you craving more. Jon has performed stand-up comedy across Canada and appeared on the CBC program “Canada’s Smartest Person Season 2.” Jon is a writer and producer for Yuk Yuk’s “The Brett Martin Show” and Jon is also an award winning screenwriter and performer of improv which gives his sets comedic versatility. Most recently Jon advanced to the finals of the 2018 Vancouver based stand up comedy competition the “Yuk Off,” where he was clearly snubbed because he didn’t win it all.

Fresh off his new album release, like bird flu on international flight, Byron Bertram travels well. His innate talent for voice and accents mixed with a confident vulnerability have taken him across the world and established him internationally as one of the top Canadian Comics working today.

He has worked on stage with the likes of Zach Gallifanakis, Flight of the Concords, and Eddie Izzard; was a hit with the judges on Brits Got Talent, has been seen on ABC’s Once Upon a Time, Dirk Gently’s, Riverdale, and heard regularly on SiriusXM.

Gavin Clarkson is a classic Yukoner, born in Whitehorse and raised as a gold miner until his move to the big city of Vancouver.  He quickly became an act to watch in the local comedy scene, winning the 2016 Lafflines Comedy Competition, placing third of over 100 acts in the 2017 Yuk Yuks Yukoff Competition, and performing in Las Vegas at the World Series of Comedy.  He performs regularly at The Comedy Mix and Yuk Yuks. His performance style is fast paced, charming, and disastrously self-aware.  You can also see him on Season 5 of History Channel’s Yukon Gold, in case you doubted how Yukon he is.

Simon King has been featured at many comedy festivals including: The Just For Laughs Festival, The Vancouver International Comedy Festival, The TBS Las Vegas Comedy Festival, The Winnipeg Comedy Festival and The HBO U.S. Comedy Arts Festival in Aspen, Colorado. A veteran touring comic, he is not only a workhorse performer averaging nearly four hundred shows a year but also an extremely prolific writer. In addition to numerous film and television credits, in 2008 The Comedy Network and CTV filmed a one-hour special starring him for the popular series Comedy Now. In early 2013 Simon recorded a second special, this one a half hour long, for the No Kidding series on Toronto-based IChannel. Simon has been featured in The LA times, the alternative arts paper the Georgia Straight, The Hollywood Reporter and many others.

Chris Griffin is one of comedy’s most dynamic storytellers. After winning his regional round of the Great Canadian Laugh Off during his first year of comedy, Chris did something crazy. He quit his full time job, sold his house and hit stages across North America doing what he loves best – drinking and making people laugh. It was a gamble that has paid off. His move to Vancouver has brought a ton of success for Griffin, including winning 1st place in Vancouver’s Yuk Yuk’s Competition, being one of the only Canadian comics to ever make the finals of the prestigious San Francisco International Comedy Competition, performing every year at the Just For Laughs Northwest Festival and sharing the stage with notable comics such as Norm Macdonald, Doug Stanhope, Tom Papa, Ari Shaffir and Bert Kreischer. 2018 is already off to a great start as Griffin was nominated three times and took home one award in the inaugural Vancouver Comedy Awards. Griffin is recording his second full length comedy special Live at the Biltmore in Vancouver on October 18th over two shows.

Katie-Ellen is a regular on CBC’s “The Debaters” and has made a name for herself as an emerging comedic talent throughout Canada and the U.S. With a sensibility that falls somewhere between the locker room and the library, she is a featured performer at the Just For Laughs NorthWest Festival, The Bridgetown Comedy Festival, San Francisco Sketchfest and The Bumbershoot Music & Arts Festival, Katie-Ellen delights audiences with her unique voice, hilarious perspective and sharp wit (to say nothing of those dimples).

Stuart Jones is a comedian originally from Kelowna BC who has been doing comedy throughout the province since 2012. Stuart has been referred to as a ‘slacker Seinfeld’ who attacks the mundane with a caustic wit. His comedy aims to show you the funny side of everyday life with jokes that will stay with you for years to come. Stuart has opened for some of Canada’s best comedians including Tim Nutt and Mike McDonald.

Randee Neumeyer is a writer living in Vancouver, BC. She does stand-up comedy and has had sex five or nine times. Appearing in comedy shows all around Vancouver, Randee’s unique performance style is making her one of Vancouver’s favorite home-grown comedians.

Originally from Taiwan, Ed is an emerging young comic who moved to Vancouver, British Columbia, thinking he was on vacation at his father’s discretion. Since then, Ed has performed all over the world. He was voted “Best Vancouver Comedian of 2016” by West Ender Magazine, and “Best Vancouver Comedian of 2015” by West Ender Magazine and The Georgia Straight, and named “Comic to Watch” in 2018 by Reader’s Digest Magazine and in 2015 by Canadian Immigrant Magazine. He has also appeared on AXS TV’s “Gotham Comedy Live”, “Laughs” on FOX, TED talks, Bite TV’s “Stand up & Bite Me”, and XM Radio’s “Laugh Attack”. He was also invited to perform at the Just For Laughs Northwest Comedy Festival, Comedy Masala in Singapore, Live Comedy Club in Taiwan, the Hong Kong Comedy Festival, NXNE, San Francisco Comedy Festival, and many more.  Ed’s tweets have also been featured on “The Tonight Show with Jimmy Fallon”, Buzzfeed, The Huffington Post, DOSE, and Distractify.

Myles Anderson has steadily gained a reputation as one of Canada’s brightest young comedians. Combining traditional jokes with bird-like movements, Myles Anderson delivers a uniquely hilarious comedy experience. He was a finalist at the Seattle International Comedy Competition and can be heard on CBC’s Laugh Out Loud. Myles Anderson is a funny comedian but is, first and foremost, a loyal subject of Her Majesty Queen Elizabeth II. He regularly performs with North America’s top headliners (when they visit Victoria) and has been broadcast on Canada’s national radio many times. All audiences appreciate Myles Anderson’s comedy, even those who are not loyal to the crown.