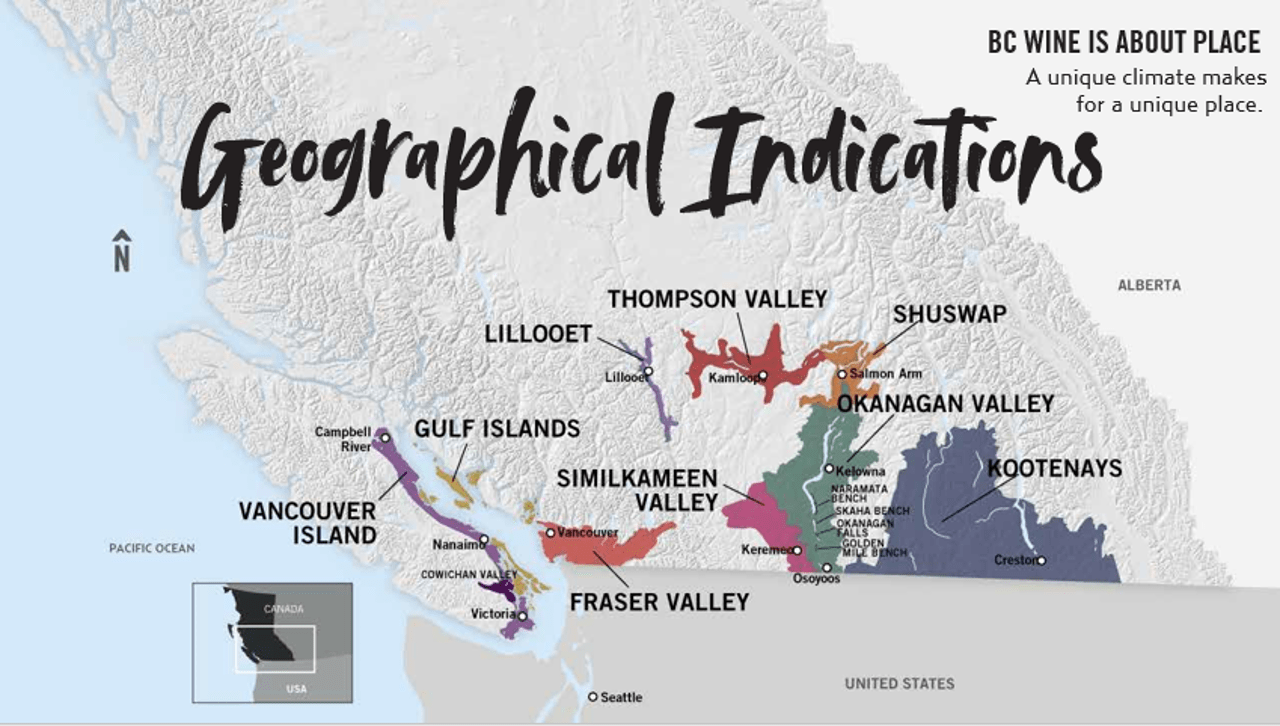 Wine Growers British Columbia is thrilled to release a new set of ten topographic wine maps showing the dramatic landscape of the province and its nine diverse wine regions in detail, now available at WineBC.com.

During the last year, Wine Growers British Columbia worked with consulting soil scientist Scott Smith and Linda Decker of Geo Earth Mapping, on the cartographic development of these high-resolution topographic maps. For the purposes of wine labelling, these regions are referred to as Geographical Indications (GIs) and divisions of these as sub-Geographical Indications (sub-GIs). These are formal designations of the place of origin of the fruit that goes into B.C. VQA Wine.

“The maps depict the extent of the GIs which are largely based on watershed boundaries or portions of watersheds. The sub-GI boundaries are based on landforms which are enduring landscape features that do not change over time,” says Scott Smith, Eterrna Consulting, Penticton.

“British Columbia is gifted with some of the most extreme and unique grape growing conditions on the planet, that are not easily defined. From the coast to the vast and rugged interior of the province, these maps were developed to be used by industry as an essential tool in telling our story. Whether you are in the wine business, interested in learning about wine, or visiting a region, these maps are an important way in understanding B.C. wines and the scope of our diverse terroir,” says Kittmer.

British Columbia continues to build its reputation for excellent winemaking and exceptional wines, further solidifying its place among the best in the world. The release of these maps will help educate the trade, media and consumers about the unique sites and growing regions that make B.C. such a special place for growing grapes and making wine.

Since 1990, WGBC has played a pivotal role in taking B.C.’s wine industry from a vision to an internationally recognized niche region producing premium wines and providing exceptional wine tourism experiences.

WGBC markets the wine and regions of B.C.; delivers quality trade, media and consumer tastings; and acts as the voice of B.C.’s wine industry by advocating to government on behalf of industry that contributes $2.8 billion in provincial economic growth annually.

WGBC represents all wineries in British Columbia to grow the premium market share for the Wines of British Columbia, while driving awareness of our world-class wines and tourism product – currently drawing 1,000,000 visitors with $600 million in tourism and tourism employment related economic impact every year.