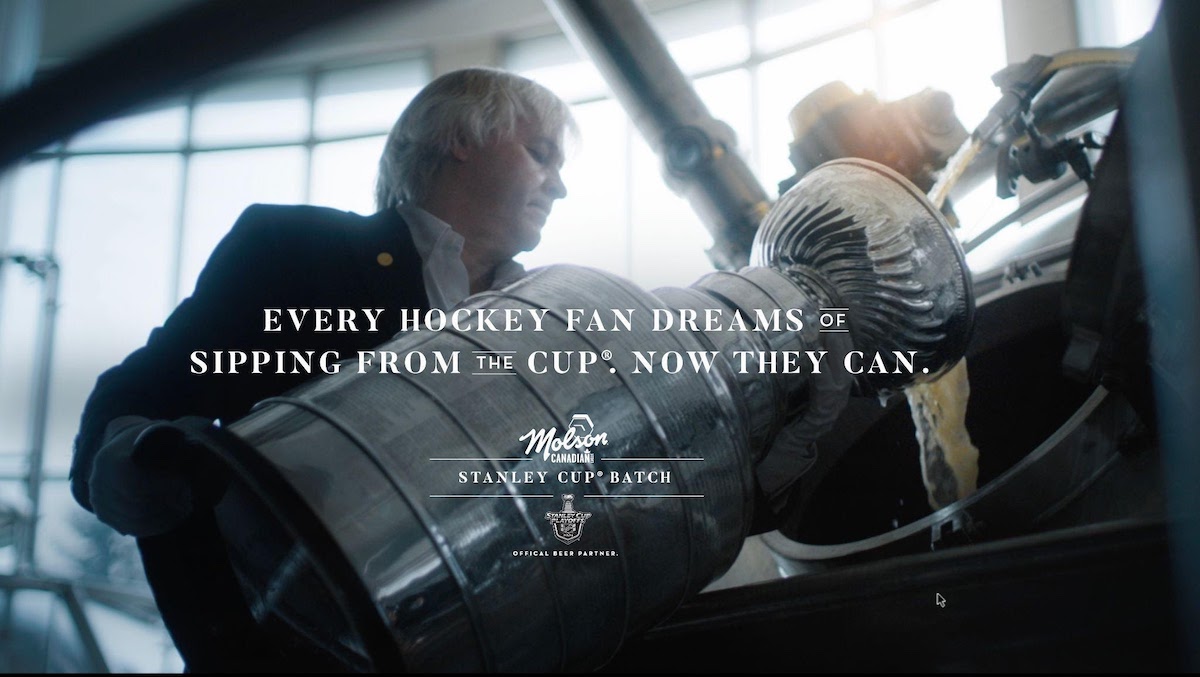 The Stanley Cup® Batch brings the essence of sipping from hockey’s most coveted trophy to Canadian homes; Molson Canadian is an Official Beer of the NHL® in Canada.

With the 2021 Stanley Cup® Playoffs underway, Canadian hockey fans are cheering their team towards victory. Just as the players dream of winning the Stanley Cup® and celebrating with the iconic tradition of drinking beer from its bowl, fans can’t help but envision themselves doing the same. With the Molson Canadian Stanley Cup® Batch, this dream can feel one step closer, as fans have the chance to sip beer kissed by the Cup.

Accompanied by Phil Pritchard, the Hockey Hall of Fame’s curator and official Keeper of the Cup, Molson Canadian welcomed the Stanley Cup® into the Molson Brewery. Following strict sanitization protocols, some fresh Molson Canadian from this limited batch was passed through the top bowl of the Cup during the brewing process so that this Playoffs season, Canadians can have the chance to celebrate like their hockey heroes – getting their own small taste from Lord Stanley’s Cup™.

“In a Playoff run unlike any before, with the North Division having showcased Canadian hockey excellence in all its glory over the past several months, we wanted to create something unforgettable for Canadian hockey fans,” says Joy Ghosh, Senior Brand Director for the Molson family of brands. “Drinking from the Cup is a special moment for players. Yet sharing that feeling with the fans has never been done before, until now. The Stanley Cup® Batch takes the passion Canadians have for our game and our beer to the next level.”

The Molson Canadian Stanley Cup® Batch is available in unique, specially designed 6-pack bottles reminiscent of the Stanley Cup® and its flight case at select local beer and liquor stores across Canada, excluding Quebec, while supplies last. This exclusive batch is only available for a limited time and in limited quantities, so fans need to act quickly before it’s gone.

The National Hockey League (NHL®), founded in 1917, consists of 31 Member Clubs and proudly welcomes its 32nd franchise, the Seattle Kraken™, for the 2021-22 season. Each team roster reflects the League’s international makeup with players from more than 20 countries represented, all vying for the most cherished and historic trophy in professional sports – the Stanley Cup®. Every year, the NHL entertains more than 670 million fans in-arena and through its partners on national television and radio; more than 151 million followers – league, team and player accounts combined – across Facebook, Twitter, Instagram, Snapchat and YouTube; and more than 100 million fans online at NHL.com. The League broadcasts games in more than 160 countries and territories through its rightsholders including NBC/NBCSN and the NHL Network™ in the U.S., Sportsnet and TVA in Canada, Viaplay in the Nordic Region and CCTV and Tencent in China. The NHL reaches fans worldwide with games available online in every country including via its live and on-demand streaming service NHL.TV™. Fans are engaged across the League’s digital assets on mobile devices via the free NHL® App; across nine social media platforms; on SiriusXM NHL Network Radio™; and on NHL.com, available in eight languages and featuring unprecedented access to player and team statistics as well as every regular-season and playoff game box score dating back to the League’s inception, powered by SAP. The NHL is committed to building healthy and vibrant communities through the sport of hockey by increasing youth participation and engagement; fostering positive family experiences; promoting inclusion, positive culture and leadership; and supporting sustainable community impact.

NHL, the NHL Shield, and the word mark and image of the Stanley Cup are registered trademarks of the National Hockey League. NHL and NHL team marks are the property of the NHL and its teams. © NHL 2021. All Rights Reserved