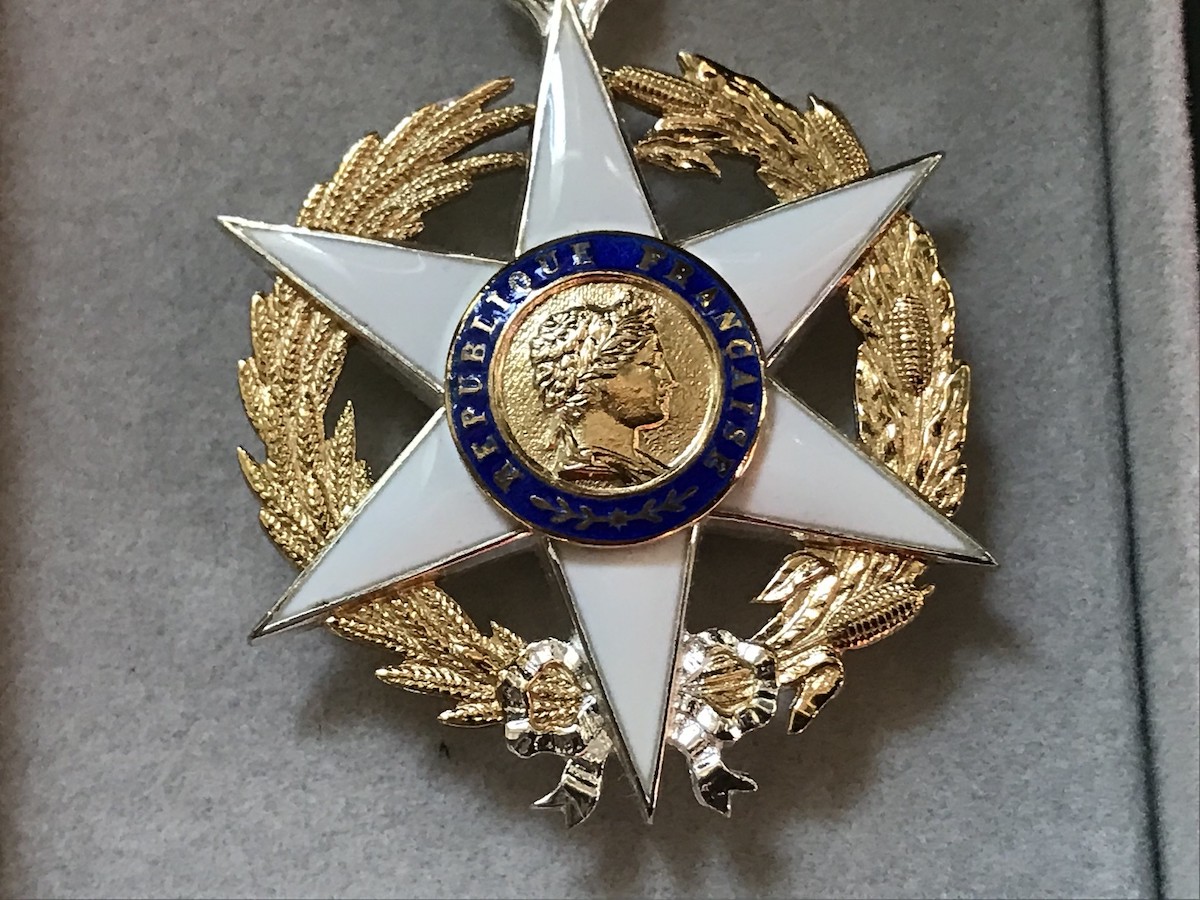 In a ceremony held at Provence Marinaside yesterday afternoon (August 18), the Government of France, as represented by its Consul General in Vancouver, Mr. Philippe Sutter, honoured Provence Marinaside’s owner and executive chef Jean-Francis Quaglia, by appointing him a Chevalier (Knight) of the Ordre du Mérite Agricole. Chevalier is one of three ranks within the Order ( Commander and Officer are the other two) and the Ordre is second in importance only to the Legion of Honour.

In his citation, Mr. Sutter stressed that this was a very high honour indeed as the Order recognizes people who have made a significant contribution to the field of French food and France’s culinary culture. Consul General Sutter explained that Chef Quaglia had been recommended for the high honour by France’s Ambassador to Canada and he went on to state that Chef Quaglia is a “culinary giant who is an incredible ambassador for French cuisine and mentor to young chefs.” M. Sutter praised Chef Quaglia for his support of French culinary initiatives such as Gout de France and how he seamlessly integrated local, B.C. ingredients into traditional French dishes. In his citation, M. Sutter also recognized the important influence of Chef Quaglia’s mother – Chef Suzanne Quaglia, who was one of the first female professional chefs in France.

Amongst the Order’s members are many distinguished restaurateurs (both in France and abroad) along with vintners, food scientists and food historians. The honour carries the same status in France as a Knighthood does in Great Britain and entitles Chef Quaglia to wear the medal or a distinctive lapel ribbon on all formal occasions.

The Order was created in 1883 to initially reward exceptional service to agriculture and its attendant culinary arts. It is notable that it was not replaced by the National Order of Merit in 1963 as other were – a testament to its long history and to the unique place that agriculture, food and the culinary arts play in the history, economy and culture of France.

In his acceptance speech Chef Quaglia acknowledged the important part played by his family and his loyal Provence team in his success. “My mother, Chef Suzanne Quaglia inspired me to become the chef I am today along with other mentors such as Chef Dominic Le Stanc at the Hotel Negresco (two Michelin stars) in Nice and Chef Bruno Born here in Vancouver.”

There are only three other Members of the Order in B.C. – restaurateurs Michel Jacob of Le Crocodile (2020), John Blakely of the former Bistro Pastis (2009), and wine expert Sid Cross (1980’s). 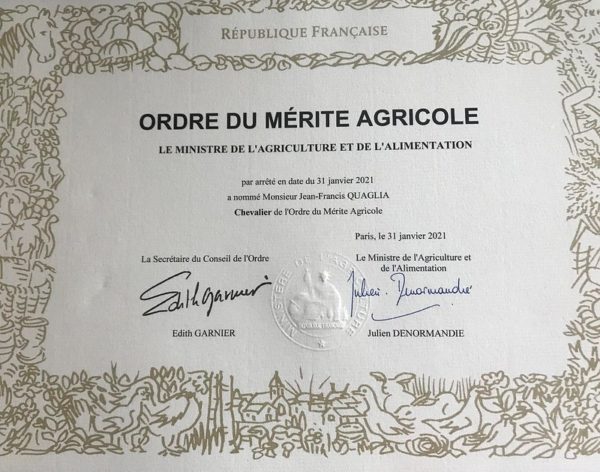 About Chef Jean-Francis Quaglia
A native of Marseille, France, Jean-Francis Quaglia comes naturally to the culinary world as his mother is acclaimed Chef Suzanne Quaglia of Marseille’s famed Le Patalain and one of the very first female chefs in France. At age eight, he made his first ‘Tarte au Citron’ from his mother’s recipe. This same tarte is now featured on Provence’s menu. When Jean-Francis was 16, Chef Suzanne opened her first restaurant and Jean-Francis decided that he too wanted to become a chef, enrolling at the École Hôteliere de Marseilles. Hôtel Sorbitel in Marseille was the location of his first apprenticeship following graduation. From there he had a brief stint in his mother’s restaurant before heading off to the Côte d’Azur and Monte Carlo where he started as Commis de Cuisine under the direction of Chef Bruno Caironi (formerly Sous Chef to Alain Ducasse). Jean-Francis then went on to work with Chef Elie Mazot at Relais et Chateau’s Le Chateau de la Chevre D’Or in Eze. As Chef de Partie Tournant, Jean-Francis mastered every station in the kitchen while working under the direction of Chef Dominique Le Stanc at Hôtel Negresco in Nice (2 Michelin stars). Hôtel Negresco was to be a turning point in his life as it was there, in 1990, that he met a young Canadian chef, Alessandra Mossa. The result sounds like a romcom – they wooed over food, and in 1992 moved to Canada where they wed.

Chef Jean-Francis’ Canadian career began as Sous Chef under Chef Bruno Born at Le Coq D’Or in Vancouver’s Kitsilano neighbourhood. In 1994, When Chef Born closed Le Coq D’Or to head up food and beverage for the Sheraton Wall Centre Hotel, he took Jean-Francis with him to be Chef de Cuisine at one of the hotel’s two restaurants – Azure Seafood Restaurant. Later, when food services were consolidated into one restaurant, Chef Quaglia became Executive Chef of the hotel’s remaining restaurant – Indigo Bistro Moderne.

Pursuing a life-long dream, Chef Jean-Francis left the Sheraton Wall Centre to open a place of his own. Provence Mediterranean Grill opened its doors in the Point Grey neighbourhood of Vancouver on December 17, 1997. In 2002 he and Alessandra took the plunge, opening a second location – Provence Marinaside, on the sea wall in Yaletown. In 2007, to mark Provence Mediterranean Grill’s 10th anniversary, Chefs Jean-Francis and Alessandra co-authored the book New World Provence – Modern French Cooking for Friends and Family and held a special celebration dinner featuring Chef Dominique Le Stanc who flew in from France for the occasion.

Early in 2012, there was another celebration as Provence Marinaside celebrated its 10th Anniversary on February 23rd. Later in the same year (mid-December 2012) the Provence ‘family’ expanded once more when Chef Jean-Francis developed and opened TWB-The Wine Bar adjacent to Provence Marinaside. The casually elegant Wine Bar soon gained a reputation as having one of the largest selections of wines-by-the-glass in North America and became popular for its ‘Tappy Hours.’

In November 2016, Chef Jean-Francis accepted an offer from a former employee to buy the Point Grey location, Provence Mediterranean Grill. The sale was completed three weeks short of the restaurant’s 19th anniversary.

2020 saw the arrival of the Covid-19 pandemic and with it, restrictions on restaurants and dining. Provence Marinaside was amongst the very first to adapt to the new reality by rapidly opening a new curb-side patio space, re-arranging the dining room to accommodate spacing restrictions (when dine-in is allowed), implementing rigorous cleaning, sanitizing and mask-wearing as mandated by BC’s PHO and pivoting to offer a reduced menu on for take-out. The TWB space was closed (except for the patio) and a new ‘TWB at Provence’ section was added to Provence Marinaside’s regular menu.

Chef Jean-Francis led the creation of a number of French Food Made Easy ‘cook-at-home’ or ‘heat and eat’ kits complete with video and written instructions. Under his leadership, Provence Marinaside continues to thrive and swiftly adapt to the changing conditions.

Provence notes:
Provence Marinaside is committed to the health and safety of its guests and staff in keeping with the protocols set by the BC Ministry of Health. You can find the details of Provence’s standards here.

In addition to Dine-In service, Provence Marinaside continues to offer its regular menus for brunch, lunch and dinner for Provence at Home Takeout. If you prefer to cook Provence’s food in the comfort of your own kitchen, they also offer four French Food Made Easy kits.

Provence Marinaside is also supporting The Downtown Eastside Women’s Centre with the donation of meals and funds along with a donation option on their should the public also wish to support the organization. Details can be found on Provence Marinaside’s Home Page.