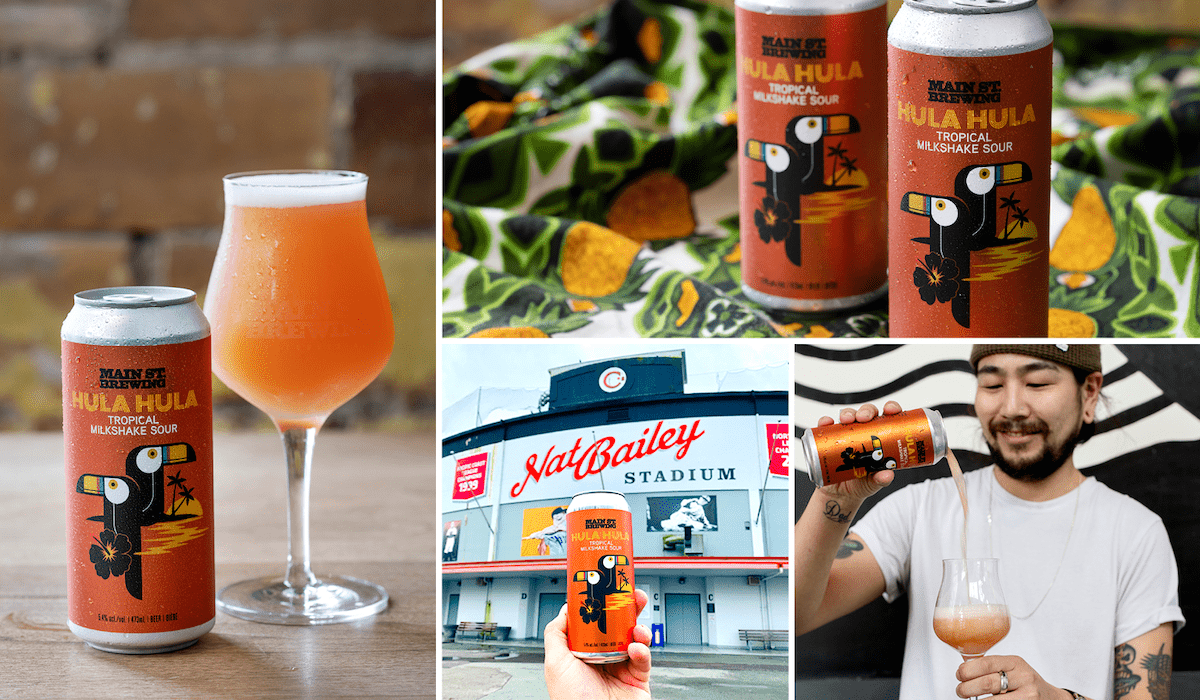 The team at Main St. Brewing is swinging for the fences and bringing its crowd-favourite Hula Hula Tropical Milkshake Sour back to the lineup at the Mount Pleasant brewery (261 E. 7th Ave.) on Friday, March 4 and adding the brew to the roster at Vancouver Canadians baseball games at Nat Bailey Stadium this spring and summer.

A Berliner Weisse-styled, sherbety slammer that goes deep at 5.4% ABV and 12 IBUs, Hula Hula Tropical Milkshake Sour conjures up flavours of a South Pacific-specific fruit basket full of fresh passionfruit, orange and guava with hints of hibiscus and vanilla and a subtle sour note.

Beyond returning to Main St. and local bars and restaurants like Langley’s The Barley Merchant Taproom and Kitchen and Townhall Langley, Vancouver’s Maxine’s Café & Bar, Browns Socialhouse Brentwood in Burnaby and Whistler’s Pizzeria Antico, Hula Hula will also join the Vancouver Canadians’ starting rotation at the ’Nat this season when the Toronto Blue Jays’ minor-league affiliate team hosts its official 2022 season home opener against the Eugene Emeralds on Tuesday, April 19.

Initially released in April 2021 as part of a four-beer, vacation-themed series, Hula Hula turned out to be the runaway smash hit of the summer and one of the most popular beers Main St. has produced since setting up shop in its heritage-building home in Mount Pleasant almost eight years ago.

“We were blown away by the response to this beer last year, so it was a no-brainer to bring it back again. The thirsty folk have spoken,” says Main St. Brewing Co-Owner Nigel Pike. “We’re also thrilled that we’ll be able to grab a hot dog, enjoy a couple pints of Hula and catch a Nooner at the ’Nat again this summer. After two seasons without baseball, we can’t wait to cheer on the boys again.”

Hula Hula Tropical Milkshake Sour will be available in the Main St. tap room and in 473-ml single cans and four-packs in its retail store next door starting this Friday, March 4 as well as at select BC Liquor stores and private stores such as Blackcomb Liquor Store in Whistler, Vancouver’s Brewery Creek Liquor Store and Broadway Liquor Store, and Outpost Liquor Store in Maple Ridge.

BORN TO BE MILD: MAIN ST. MARKS ‘MARCH MILDNESS’
This March, Main St. Head Brewer Azlan Graves is taking a cue from Seattle’s Machine House Brewery and hosting a month-long ‘March Mildness’ event that showcases and celebrates mild brews for true ale aficionados. Graves and his team will feature a rotating roster of milds including a now-available ‘Calm Before The Storm’ Dark Mild (3.8%/30 IBU), a ‘Yorky Mild’ (3.7%/14 IBU) collaboration with the team at Squamish’s Backcountry Brewing that will debut in mid-March, and guest milds from Main St.’s neighbours at Brassneck Brewery and Langley’s Smuggler’s Trail Caskworks available on hand-pull beer engines in the Main St. tap room while supplies last.

For more on Main St. Brewing or to stay up to date on all the latest launches, go to mainstreetbeer.ca, become a fan of /MainStreetBeer on Facebook or follow @mainstreetbeer on Instagram.

Main St. is also home to the Burgerland Smash Up, which serves freshly ground, organic & grass-fed BC beef and Impossible™ Smashburger creations inspired by beloved regional recipes from around the world Tuesdays through Sundays from noon to 8 p.m.