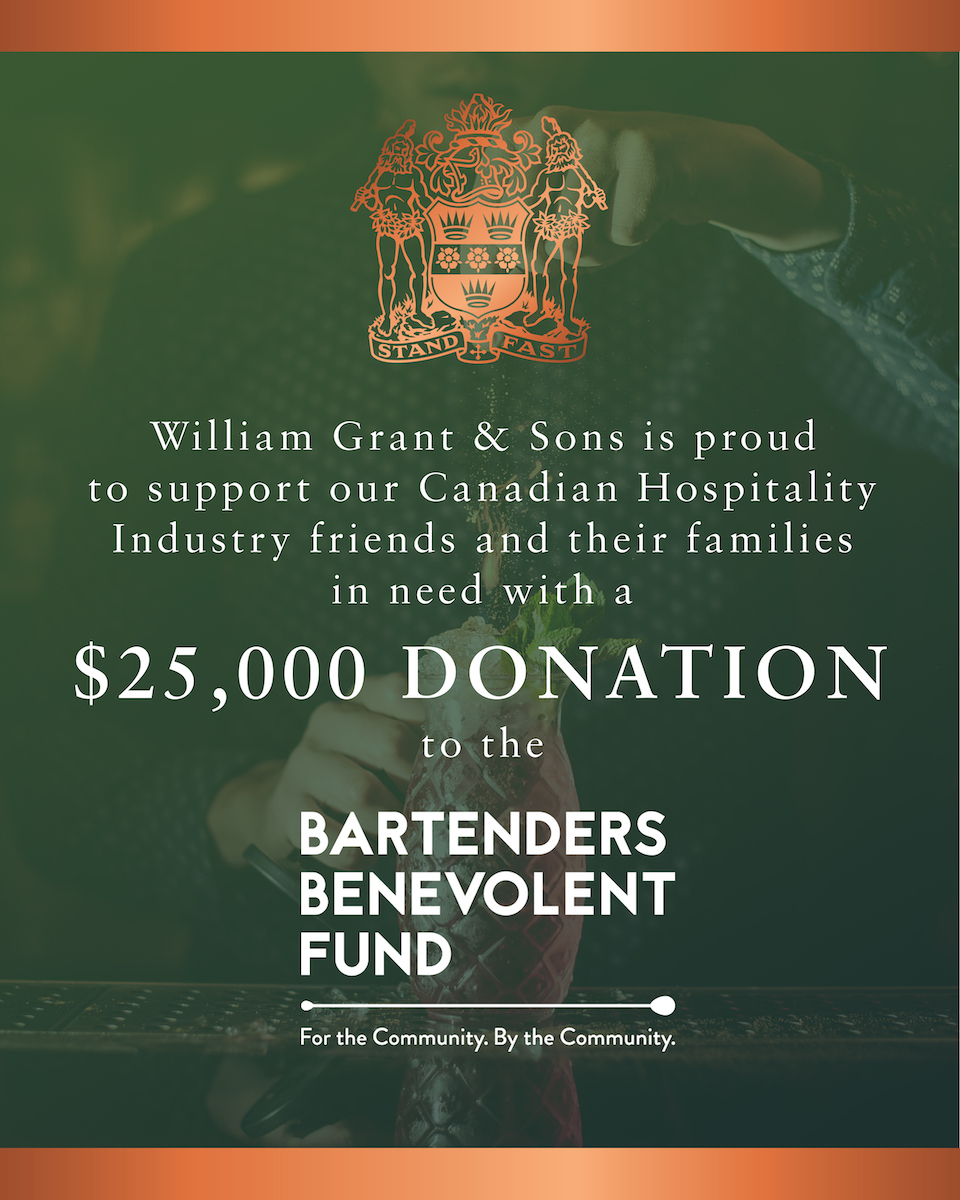 WILLIAM GRANT & SONS DISBURSES $25,000 IN RELIEF TO AFFECTED WORKERS IN THE CANADIAN HOSPITALITY INDUSTRY VIA THE BARTENDER BENEVOLENT FUND

“The work of the Bartenders Benevolent Fund is imperative during a time when hospitality workers and their families have been severely impacted by the current pandemic facing all Canadians,” comments Beth-Anne Perry, Country Marketing Director, William Grant & Sons.

“As leaders in the spirits business, we aim to inspire other companies to join William Grant & Sons in supporting Canadian workers in the hospitality industry.”

Founded in 2013, the Bartenders Benevolent Fund is a Canada wide not-for-profit organization that provides funding for those in the industry who have fallen under serious financial hardship.  Created by Canadian industry veterans Dr. Andrew Toplack (The Toplack Sessions), Jon Gray (Drink Tank) and Jonathan Humphrey (Drake Properties, Toronto Cocktail Conference), the fund raises dollars through individual donations, brand sponsorships and fundraising initiatives.  Recipients are awarded sums of $100, $250 and $500 and disbursements are awarded by local disbursement committees in five regions: Pacific Canada, Prairies, Ontario, Quebec and Atlantic Canada.  All recipients are kept anonymous.

The donation to the Bartenders Benevolent Fund in Canada is part of a new global initiative from William Grant & Sons called the Stand Fast Campaign, a multi-pronged relief effort to support the on-trade community in the immediate future and on an ongoing basis.

As part of the Stand Fast Campaign, WG&S has established the Stand Fast Fund, a fund to provide monetary support to the global on-trade industry.  The fund will be deployed through donations to industry-based charities, paid initiatives to employ hospitality workers for WG&S projects, and via ambassador, on-premise and sales and marketing teams that work with local organizations to make an impact.  Global activity will be shared on Instagram with the hashtag #StandFast.

“We’re proud to make this donation to the Bartenders Benevolent Fund as we continue to #StandFast and support the hospitality industry in Canada,” adds Perry.

“Our hope is to provide some immediate relief during a very difficult time.”

William Grant & Sons Holdings Ltd is an independent family-owned distiller headquartered in the United Kingdom and founded by William Grant in 1887. Today, the global premium spirits company is owned by the fifth generation of his family and distils some of the world’s leading brands of Scotch whisky, including the world’s most awarded single malt Glenfiddich®, The Balvenie® range of handcrafted single malts and the world’s third largest blended Scotch, Grant’s®, as well as other iconic spirits brands such as Hendrick’s® Gin, Sailor Jerry®, Tullamore D.E.W.® Irish Whiskey, Monkey Shoulder® and Drambuie®.

AN ORBICULAR OCCURRENCE: HENDRICK’S GIN PERSUADES GUESTS TO PARTAKE IN THE PARALLEL WITH ORBIUM