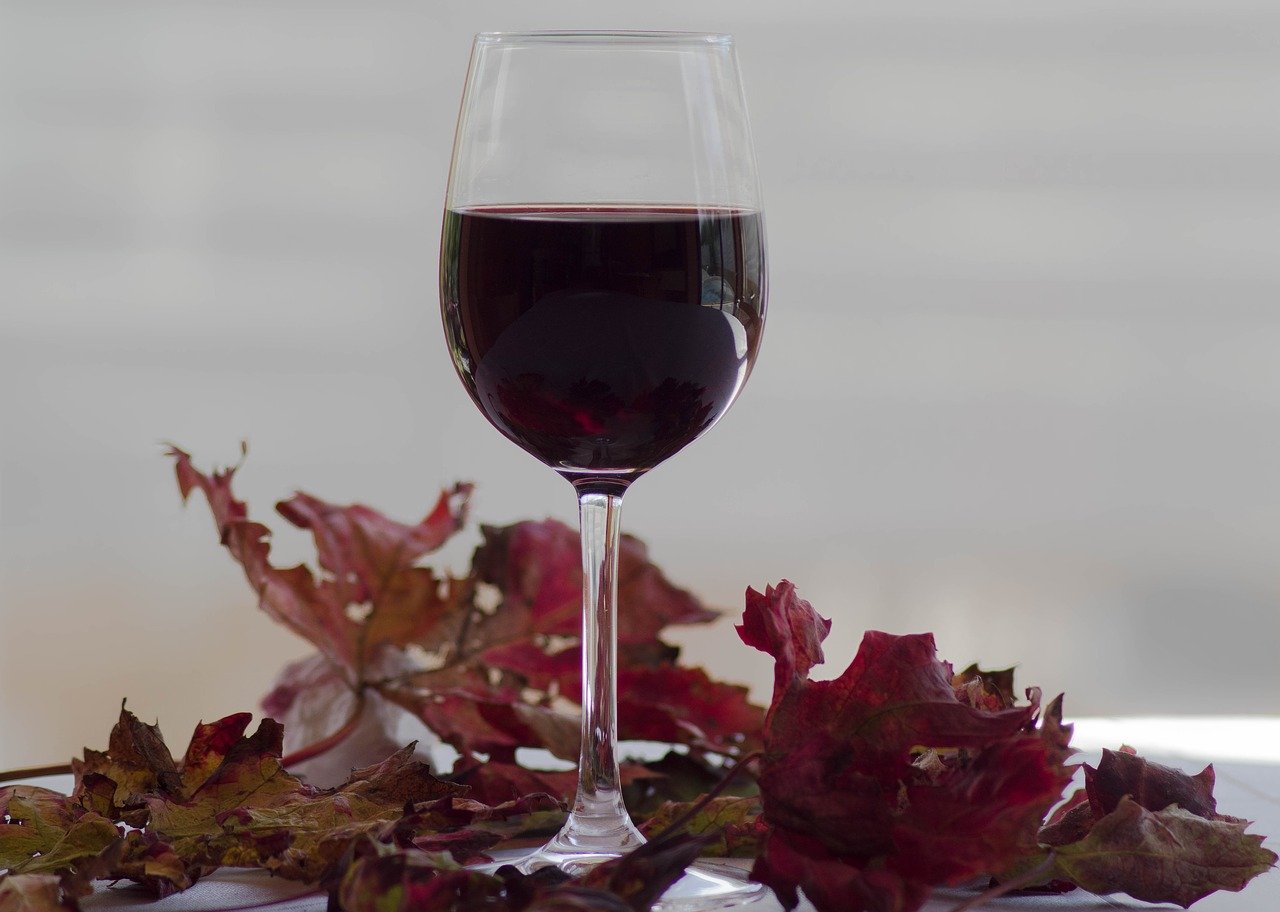 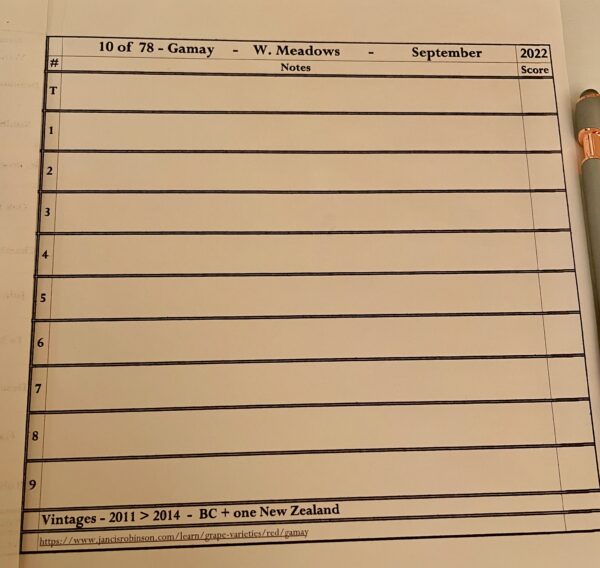 Wayne Meadows is one of the founding members of our tasting group, which began in 1978.  Besides being a renowned winemaker, he is very organized and plans his September tastings several years ahead of time, so it was no surprise to find out that this year’s tasting was ‘Aged BC Gamay’ wines.

Those who are into wine will know that Gamay, aka Gamay Noir, is native to the French region of Burgundy but then made its way to Beaujolais where it put down roots.  The best Beaujolais wines come with the name of one of ten villages – Moulin-à-Vent, Morgon, Julienas, Brouilly, Cote de Brouilly, Régnié, Chénas, Chiroubles, Fleurie, or Saint Amour.  These wines can be big in the mouth and layered with aromas and flavours.

Like its Burgundian relative Pinot Noir, Gamay tends to be a light-bodied red wine and shares some of its characteristics – delicate floral aromas, earthy, forest floor, cherry, raspberry, strawberry, red currant, rose petals, violet, earth, herbs, cherry, plum, and pepper.  And like Pinot Noir, it can pair nicely with many fish dishes.  Fans especially love Gamay as it tends to be less expensive than its Pinot cousin.  Gamay has high acidity, is lower in tannins, and has lots of fruit, making it a versatile food wine and ideal to serve with holiday dishes such as turkey, ham, or salmon.  Red wine drinkers love it slightly chilled in the summer when other go-to wines might be too big and heavy.

Gamay has spread to other wine regions, such as the Loire Valley (France), Australia, BC, New Zealand, Ontario, Oregon, and Switzerland.

This grape is also found in PTG wines (Passe-Tout-Grain) a blend of Pinot Noir and Gamay. The Bourgogne version requires that Pinot Noir comprise at least one-third of the blend.

In BC Gamay now ranks as the sixth most commonly grown red wine grape and does well in some of the cooler climate regions.  There are well over two dozen wineries making Gamay.  They can be found on Vancouver Island, the Fraser Valley, the Shuswap, the Similkameen Valley, and spread from north to south in the Okanagan Valley.

For this tasting, we were told that it was a flight of aged Gamay wines, one from New Zealand, and the rest from BC.  Wayne had read Jancis Robinson say that aged Gamays were similar to Pinot Noirs, so he decided to make that a theme for this presentation.   Vintages ranged from 2011 – 2014. 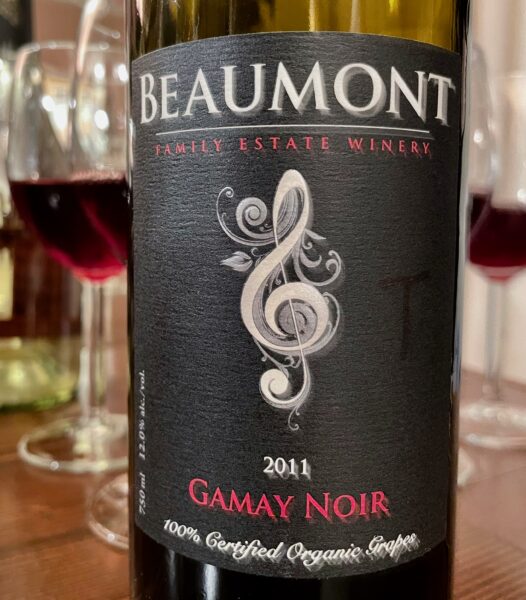 We began with a 2011 Beaumont Gamay from West Kelowna.  12% ABV.   $23.90
Sadly, this wine was a little past its prime, though certainly very drinkable.  Ruby red in colour with medium intensity.  Menthol, cherry, and vanilla on the nose.  Good balance, slightly high in acidity.  Bright fruit on the palate followed by a medium finish. 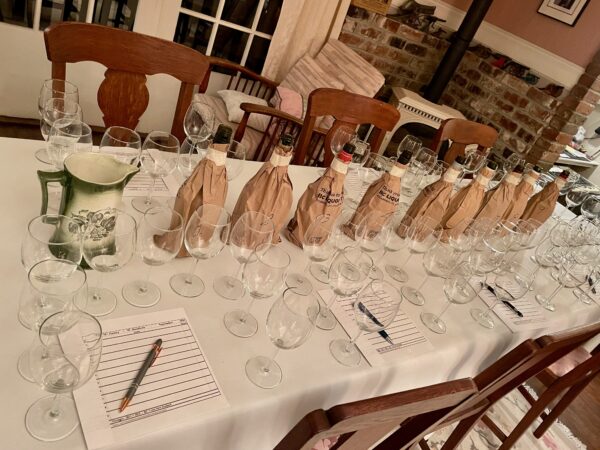 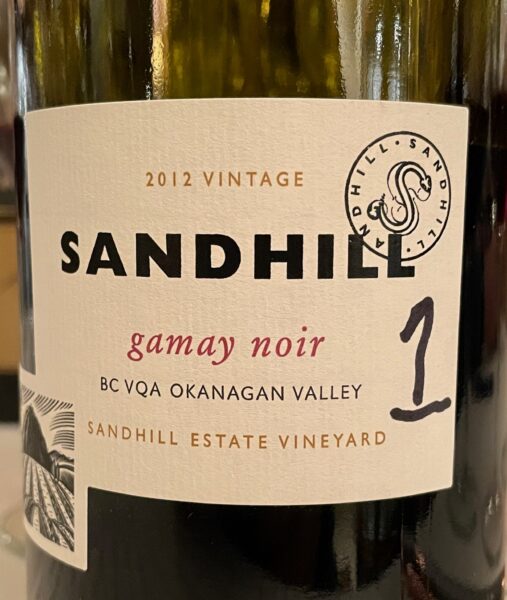 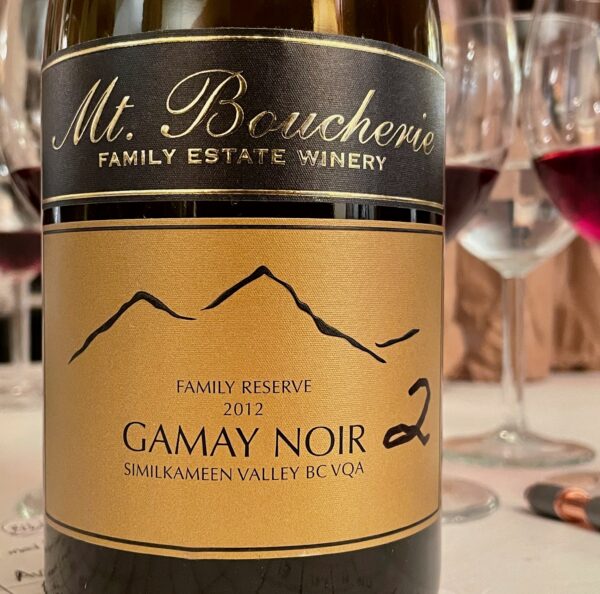 Mt. Boucherie 2012
Similkameen Valley
$20.00             14.0%
Garnet red with medium-plus intensity.  Floral, cherry pie, spice, and smoky notes on the nose.  Good balance.  The flavours follow the nose.  A medium-plus finish.
One person’s second favourite.
The group had this one tied for fourth place as did I. 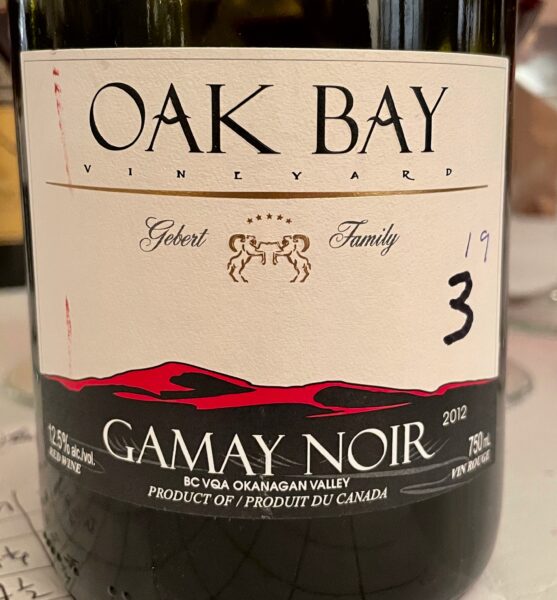 Oak Bay (St. Hubertus) 2012
Okanagan Valley
$19.00             13%
Garnet red with medium-plus intensity.  Classic Gamay nose with cherry, floral, vanilla and smoky notes.  Good balance and tannin structure.  The flavours mirror the nose followed by a medium-plus finish.
Two people had this as their second favourite.
The group had this one tied for fourth.
Tied for my #2 place. 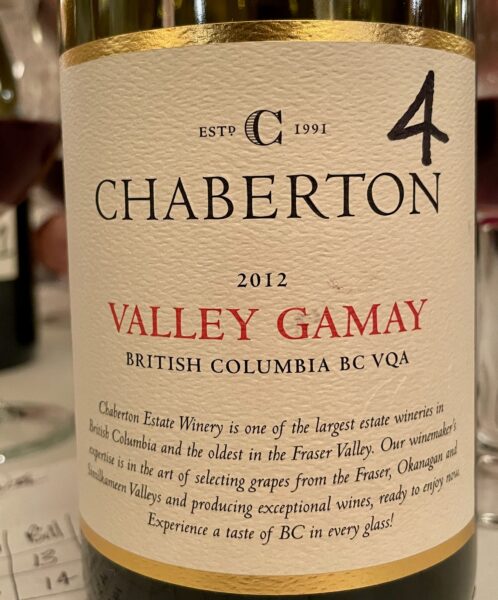 Chaberton 2012
Similkameen & Okanagan Valley
$20.00             14%
Garnet red with medium-plus intensity.  Dark fruit, forest floor, and red berries on the nose.  Good balance with slightly high tannins.  The nose is reflected on the palate followed by a medium finish.
The group had this as #1 by a slight edge.
Three people’s favourite and three people’s second place wine. 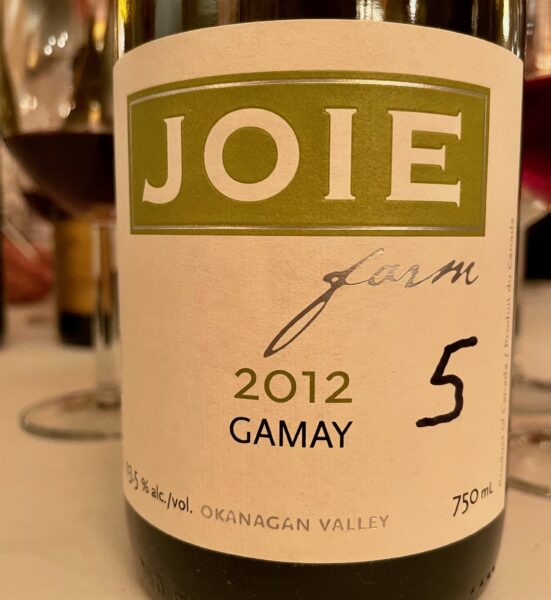 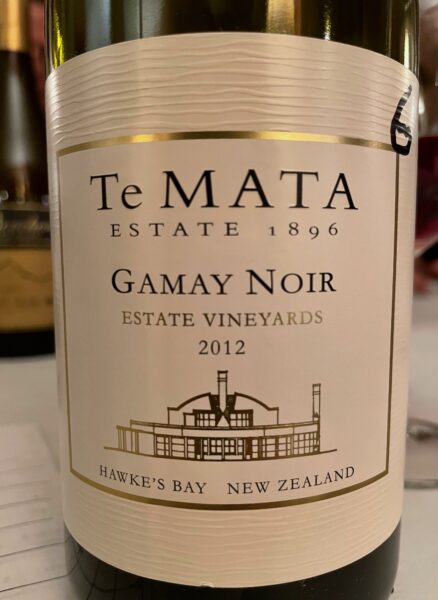 Te Mata 2012
Hawkes Bay, New Zealand
$24.00             13%
Garnet red with medium-plus intensity.  Ripe cherries, cranberries, and red currants on the nose.  Good balance.  Lots of fruit on the palate followed by a medium-plus finish.
One person had this as their second favourite.   The group placed it as #5.
Number three for me. 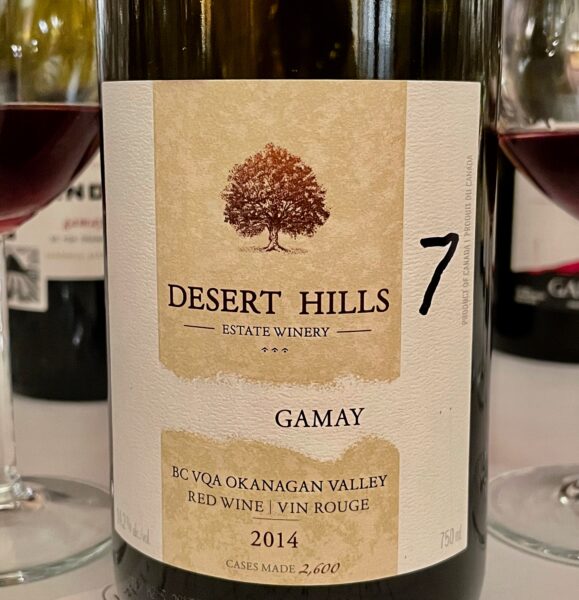 Desert Hills 2014
Okanagan Valley
$22.50             14%
Garnet red with medium-plus intensity.  The nose is inviting, meaty, and fruity with lots of cherries.  Good balance.  Appealing and fruity on the palate followed by a medium-plus finish.
Overall it came in second place.  Five people had it as their favourite and two as their second-place wine.
My favourite by a slim margin. 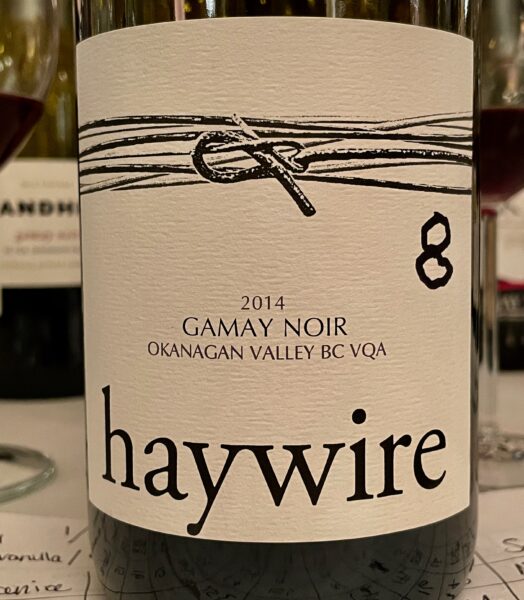 Haywire 2014
Okanagan Valley
$30.70             13%
Garnet red with medium-plus intensity.  Faint fruit on the nose, good balance, pleasing fruit on the palate followed by a medium finish.  Perhaps a couple of years past its prime.
One person had this in their #2 spot.  The group rated it as eighth.

Robin Ridge 2011
Similkameen
$24.00             14%
This one was clearly different in appearance, garnet red with deep intensity.  Red and black fruit on the nose and good balance.  Lots of fruit on the palate followed by a medium-plus finish.
The group had it at #3.  One person’s favourite and two people’s second.
Tied for my #2 place.

Wayne’s show and tell for the evening was an agate and gold corkscrew circa 1750.  Very impressive. 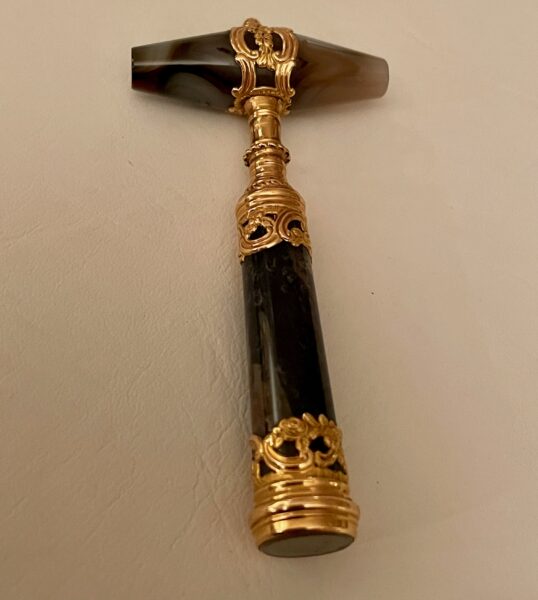 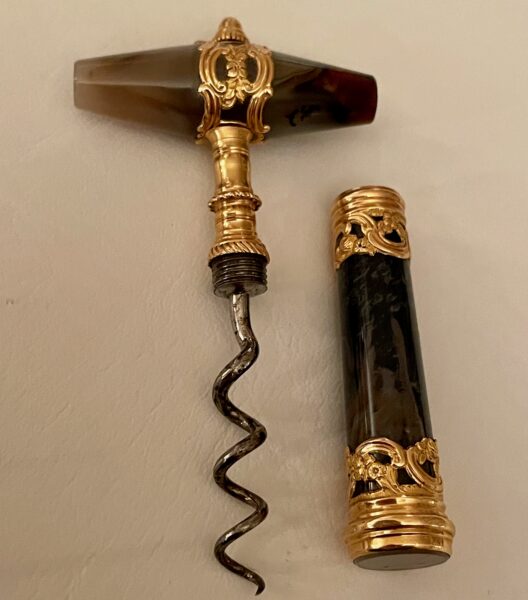 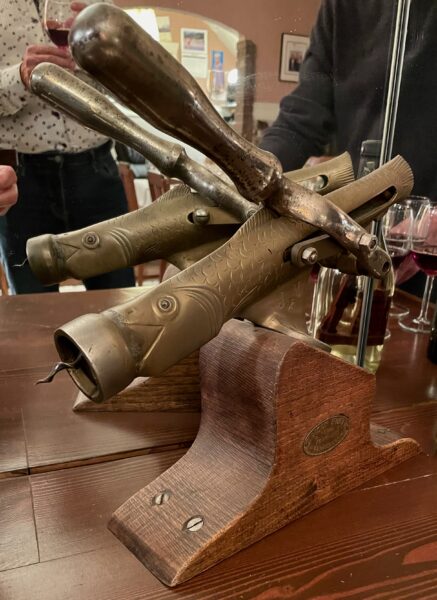 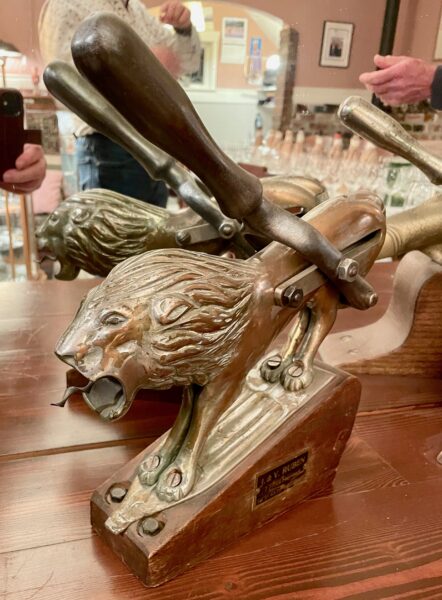