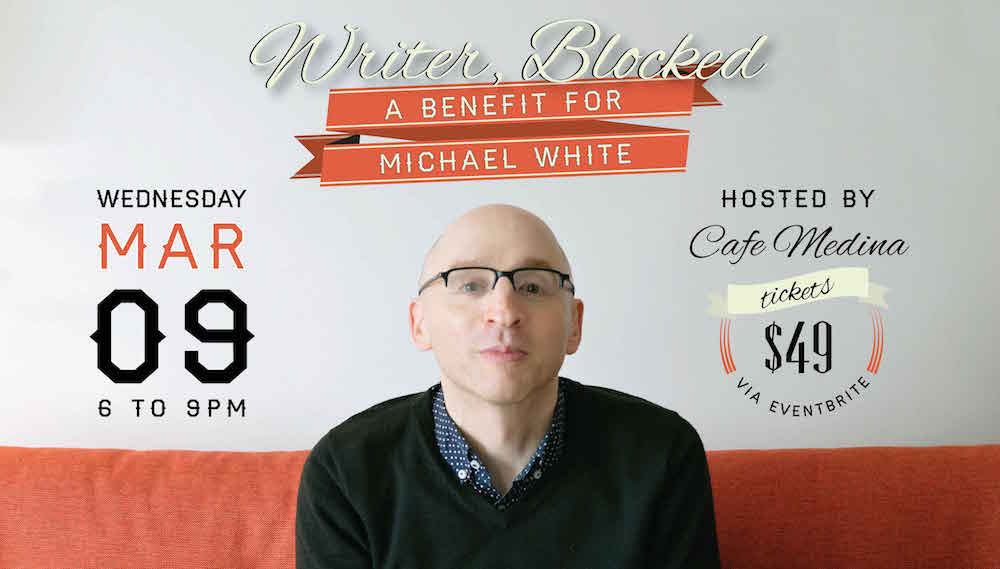 Luminaries from the hospitality and media industries are banding together to support one of their own at Café Medina on Wednesday, Mar. 9 from 6 to 9 p.m. as they host Writer, Blocked: A Benefit for Michael White.

This past August, White — a former senior editor overseeing food and drink coverage at Vancouver Magazine and award-winning author of music biography Popkiss: The Life and Afterlife of Sarah Records — was days away from departing from the magazine to embark on a series of special projects when he began suffering painful and constant spasms in his neck muscles that caused his head to pull backward and convulse involuntarily. He was soon diagnosed with a form of cervical dystonia, or spasmodic torticollis, a rare and debilitating chronic neurological movement disorder.

With no medical coverage and faced with the sudden loss of his livelihood and independence, a number of supporters — including the BC Hospitality Foundation — stepped forward and donated much-needed funds for White to travel to clinics in both Toronto and New Mexico, where he sought specialized treatments for the incurable condition.

In keeping with that spirit, friends, associates and former colleagues are continuing the goodwill groundswell for White by organizing Writer, Blocked: A Benefit for Michael White, a reception-style fundraising event featuring canapés provided by Café Medina, cheese and charcuterie by La Grotta Del Formaggio and dessert by Bella Gelateria.

“I’m deeply humbled and immeasurably grateful to everyone who has decided to host and lend a hand with this event,” said White. “It’s been a tough pill to swallow, but the kindness, generosity and compassion shown to me by so many since my diagnosis have provided me with a measure of comfort and reassurance as I continue to live with and learn how to battle this condition.”

Tickets to Writer, Blocked: A Benefit for Michael White cost $49 per person plus tax, and may be purchased via Eventbrite: writerblocked.eventbrite.ca. Cash donations via Eventbrite are also appreciated.

All proceeds from ticket sales and silent auction items will be donated to White as he continues to seek specialized treatment, and to supplement living costs while he is unable to generate income through employment.

For anyone wishing to make a contribution to the silent auction or event, please contact Shelley McArthur at (604) 219-9042 or smc@nullshelleymcarthur.com.

ABOUT MICHAEL WHITE | Michael White, a Vancouver-based journalist who previously oversaw food and drink coverage as senior editor at Vancouver Magazine and authored the music biography Popkiss: The Life and Afterlife of Sarah Records, was diagnosed in August of 2015 with a rare, painful and incurable condition known as spasmodic torticollis, or cervical dystonia, which causes involuntary spasms and tremors in the neck and head. Since that time, White has suffered the loss of his livelihood and independence and struggled to afford the cost of both conventional pharmaceutical treatments and more alternative therapies as he seeks out a way to recover from the ongoing and debilitating symptoms.

ABOUT CAFÉ MEDINA | Since opening in 2008, Café Medina has been serving up its signature brand of Mediterranean-inspired cuisine, connoisseur-savvy coffee and sweet sustenance via the city’s best Belgian waffles. A quaint, bistro-styled restaurant replete with old-world charm and proprietor Robbie Kane’s determined philosophy of enlightened hospitality, Café Medina provides a full complement of fresh and eclectic breakfast, lunch and daily brunch alternatives and a pioneering attitude towards café culture. Since moving to its new location in Vancouver’s Library District at 780 Richards St., the new Café Medina has garnered numerous rave reviews, cementing its longstanding reputation as the city’s leading brunch destination.