Bard on the Beach Shakespeare Festival continues its 27th season with the opening of Pericles on the Howard Family Stage in the Douglas Campbell Theatre Tent. Directed by Lois Anderson, this fast-paced, thrilling tale set in an ancient mythical world follows a prince’s arduous quest to find love and the meaning of life. Pericles runs from July 2 to September 18. 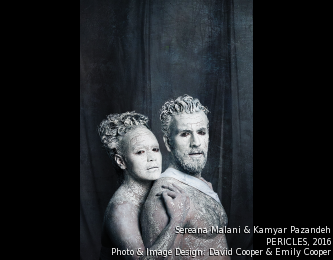 THE STORY: In an ancient time in Ephesus, the healer Cerimon (David Warburton) creates medicines in a ruined Temple of Diana for an ailing foreign king named Pericles (Kamyar Pazandeh). A madam (Kayla Deorksen) and pimp from the local brothel arrive with a young girl; Cerimon has purchased her services to help him prepare healing potions. Cerimon explains to his new apprentice that Pericles is sick with grief, and then launches into the full story of Pericles, Prince of Tyre. Fifteen years earlier: Pericles had sailed to Antioch to solve a riddle and marry a princess. He discovers the riddle’s answer, but the knowledge of this dark secret places his life in danger. He escapes by sea and flees to a drought-stricken land, Tharsus. Unable to return home to Tyre, he asks his trusted advisor Helicanus (Luc Roderique) to go and serve as governor in his stead. Sailing on, Pericles is shipwrecked and washes ashore in Pentapolis, where he competes in a royal joust for the hand of a princess. Victorious, he feasts with her father, King Simonides (Ian Butcher), and he and the princess, Thaisa (Sereana Malani), fall in love. They marry, and soon she is pregnant. Helicanus then sends word from Tyre that it’s now safe for Pericles to come home to rule, so Pericles and Thaisa set sail for Tyre. A storm breaks out and Thaisa goes into labour; a daughter is born but Thaisa dies in childbirth. Devastated, Pericles casts her body into the sea and takes refuge at the nearby port of Tharsus, where he once delivered grain. There, he leaves his newborn baby daughter Marina (Luisa Jojic) in the care of Governor Cleon and his wife, Dionyza (Jeff Gladstone). As she ages, Marina’s beauty sparks the jealous ire of Dionyza, who orders the servant Leonine (Kayvon Kelly) to murder her. But before he can kill Marina, pirates seize her and carry her away by sea. Time passes, and Marina is ultimately sold to a brothel, but she manages to maintain her purity; clients are swayed by her goodness and forsake their bawdy ways, including Governor Lysimachus. Now the story returns to the temple, where Cerimon concludes the tale of Pericles and the story’s final, unexpected events unfold.

Performance details for Pericles are as follows:
Previews: July 2, 3, 8, 9; OPENS: Sunday, July 10 at 7:30pm. Runs Tuesday through Sunday, July 2 to September 18, on the Howard Family Stage in the Douglas Campbell Theatre Tent, in Vanier Park
Plays in repertory with Othello, which begins in previews on June 24
Talkback Tuesdays: free post-show discussions following Tuesday performances in both theatres; July 5 – August 30

Ticket prices for 2016 include all applicable fees and taxes and begin at $20 for every regular play performance. Early booking is recommended for best seat selection; all seats are reserved and many performances sell out in advance. Play photography, the performance schedule and more site and event details are at bardonthebeach.org. Book tickets through the Bard Box Office at 604-739-0559, 1-877-739-0559 (toll free) or order online through the Bard website. Bard on the Beach gratefully acknowledges its 2016 Season Sponsor, Goldcorp, and the production sponsor of Pericles, BlueShore Financial.

BARD ON THE BEACH ADDS PERFORMANCES DUE TO POPULAR DEMAND

Bard on the Beach Shakespeare Festival Announces Its 2019 Lineup: Celebrating The 30th Season