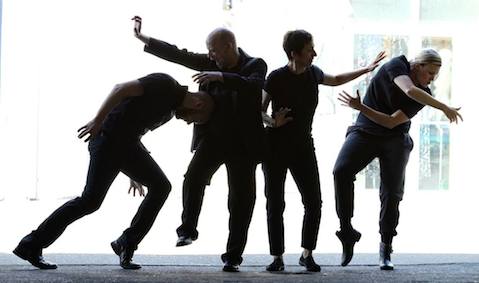 Following the Vancouver performance, 4OUR will embark on an Atlantic tour with stops in New Brunswick, Newfoundland, and Labrador.

“I was deeply humbled by the incredible audience response at the work’s 2015 premiere, which enjoyed three sold out performances at the Scotiabank Dance Centre,” explains Laughlin. “The work’s exploration of memory, family, and the singular moments that shape our lives clearly resonated with patrons. It is such a joy, and a gift, to be able to present 4OUR again for Vancouver audiences. In fact, it is the perfect send off as we prepare to tour the work throughout Atlantic Canada this fall. In revisiting the choreography, we have all found fresh emotional connections with the material, and with the introduction of newcomer Jarrett Siddall. Jarrett is an exquisite mover – his physical virtuosity and theatrical approach are something to behold.”

4OUR echo’s the evolution of life’s journey, from early childhood through adulthood and onward until we lose the people we love. It is a poignant reflection of the arc of life and on those who influence, support, protect, and ultimately leave us. Balancing moments of melancholy with humour, and nostalgia with celebration, the piece examines the power and formation of memory as we navigate through life.

Hailed as “a chameleon” by The Globe and Mail, Laughlin’s athletic background and versatility has informed more than 60 highly inventive creations for JOE INK and such esteemed organizations as the National Arts Centre, the Banff Centre, the Canada Dance Festival, the Royal Winnipeg Ballet, and the Johannesburg-based Moving into Dance Mophatong, to name a few. His excellence in choreography – influenced by classical to contemporary and hip hop to gymnastics – has been recognized with the Clifford E. Lee Award for Choreography, the Jacqueline Lemieux Prize, and the Isadora Award, among others.

Laughlin will be joined on stage by three technically brilliant and profoundly emotive dance-greats, each at varying stages in their careers. They include:

•Award-winning dancer/choreographer Gioconda Barbuto has performed with Minnesota Dance Theatre, Les Grand Ballets Canadiens, and Nederlands Dance Theatre III, and appeared in works by George Balanchine, James Kudelka, José Limon, Margie Gillis, and Jiří Kylián, among others throughout her successful career as a company dancer and independent artist. As a choreographer, Gioconda has created works for Les Grande Ballets Canadiens, BJM Danse de Montreal, Ballet BC, and the Dutch National Ballet Academy, to name a few.

•A sought-after dancer/choreographer Heather Dotto has been a member with MOVE: The Company since 2005, and has toured internationally to Shanghai, Singapore, New York, Bangkok, and England.

•Making his debut in 4OUR is Jarret Siddall. Also the youngest of the four generations represented, Siddall has been a company member with Toronto Dance Theatre since 2012, and has worked with such renowned choreographers as Julia Sasso, Jean-Pierre Perreault, Ame Henderson, Christopher House, and Peter Chin, to name a few. In addition to his work with 4OUR – his first-ever JOE INK production – Jarrett is co-director of the collective His & Hers. He is currently working with choreographer Serge Bennathan on a new full-length production, set to premiere in Toronto in 2018.

Single tickets for 4OUR are now on sale at ticketstonight.ca.

Based in Vancouver, BC, JOE INK is renowned for it’s versatility, creating provocative and lyrical dance works that balance local performers and projects in partnership with national and international artists and organizations. Led by founding Artistic Director Joe Laughlin, the company’s mission is to engage, inspire, and motivate people through the medium of dance, pushing the edge creatively and artistically as professional artists while strengthening community through dance.

In addition to a large portfolio of successful works, JOE INK has also produced multiple public performances in the context of the community-based dance program Move it! for almost 15 years.