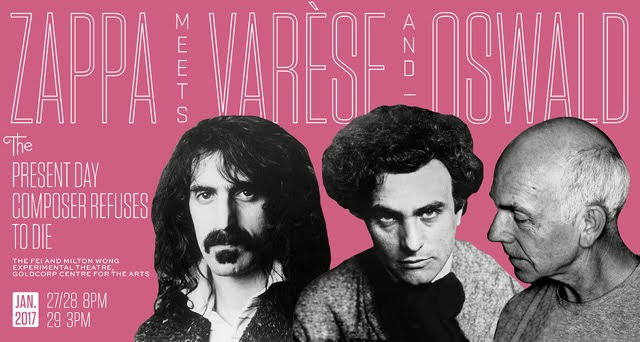 In a musical spectacular, Turning Point Ensemble and arguably Canada’s boldest composer, John Oswald, pay tribute to two masters – Frank Zappa, the man, the myth and the moustache, and Edgard Varèse, one of the twentieth century’s great composers. Turning Point Ensemble will expand to 30 instruments to bring Zappa’s music to the PuSh Festival.

We know Frank Zappa as a daring innovator, synonymous with audacity, virtuosity and crazy inventiveness.  But as a youth he cut his teeth on Edgard Varèse and was inspired throughout his life by his music.   Both Zappa and Varèse are two of the most striking musical figures of the last century.

“In this exciting concert, we will perform some of Zappa’s most beloved works from his brilliant Yellow Shark project,” stated Owen Underhill, Artistic Director and conductor of Turning Point Ensemble.  “Varèse will be recognized, as the ensemble will play two works from the mid-twenties that show how revolutionary he was.  As TPE is known for linking music to present day, we are excited to feature a world premiere by Toronto based composer, saxophonist, and media artist John Oswald, the master of “plunderphonics” and other musical innovations.”

The concert will include Varèse’s rarely performed 1925 composition Intégrales for winds and percussion, and Zappa compositions from the Yellow Shark project, “Dog Breath Variations/Uncle Meat, Be-Bop Tango, Get Whitey, Outrage at Valdez, The Girl in the Magnesium Dress and G-Spot Tornado with new choreography by Rob Kitsos.

Born in Baltimore, Maryland, on December 21, 1940, Frank Zappa was largely a self-taught musician, whose 30-year career embraced a wide variety of musical genres, encompassing rock, jazz, synth and symphonies. Avant-garde composers, as well as math and chemistry from his father’s work, all fell into Zappa’s mix of influences and comprised his unique approach to his art, coupled with a flouting of convention. Zappa also directed films, designed album covers and spoke about social issues. Although his unconventional aspect often overshadowed his brilliance, Zappa is highly respected as a musical pioneer. He died from prostate cancer on December 4, 1993, at age 52.

Edgard Varèse (1883-1965) was born in Paris of an Italian father and French mother. In 1914 he moved to the United States, where he decided to destroy all his works composed up to that moment, and to set off in a radically new direction as a composer, researcher and innovator.

In New York he worked as a conductor (in 1919 he founded the New Symphony Orchestra) and concert organizer with the aim of familiarizing American audiences with contemporary music and introducing works and composers who had previously been ignored in the United States. In the same period he started composition of a limited number of works, which would soon establish Varèse in the whole world as one of the most advanced and daring of composers, committed to exploring the unknown territories of New Music.

His intellectual shift from the dominance of melodic progression to a more textural approach to composition would see him revered by such cultural figureheads as Igor Stravinsky, Karlheinz Stockhausen, Frank Zappa, and others. His Poème électronique was one of the first examples of a purely artificial, studio-made composition, and would act as a blueprint for later electroacoustic explorations. The work Ionisation for percussion ensemble included air-raid sirens and was described by the New York Times as a ‘terrible and marvellous work’. The 1954 premiere of Déserts caused an uproar comparable to the infamous response to The Rite Of Spring some fifty years earlier.

John Oswald is a Canadian composer, saxophonist, media artist and dancer. His best-known project is Plunderphonics, the practice of making new music out of previously existing recordings and is a winner of the Governor General’s Award in Media Arts.

Oswald coined the term “plunderphonics” to describe his craft in a paper called “Plunderphonics, or Audio Piracy as a Compositional Prerogative” which he presented at the Wired Society Electro-Acoustic Conference in Toronto in 1985. Inspired by William S. Burroughs‘ cut-up technique, Oswald had been devising plunderphonic-style compositions since the late 1960s.

Multifaceted artist John Oswald nearly always incorporates an electroacoustic element to his productions. His works are part of the regular repertoire of Kronos Quartet, Culberg Ballet of Sweden, Ballet of Monaco, Deutsche Opera Ballet Berlin, Modern Quartet and Penderecki Quartet. Among his recent activities are a sound procession for Brazilia; a choreographic work for 22 choreographers (among which Bill T Jones, Margie Gillis and Holly Small); commissions from groups such as Ballet de l’Opéra of Lyon, Change of Heart, SMCQ as well as Dutch National Radio and the CBC.

Since its first public performance, the 17-member Turning Point Ensemble has become a distinctive fixture in the Vancouver arts scene, known for its quality of musical performance, innovation in programming and multidisciplinary collaboration.

The Turning Point Ensemble is a Vancouver based large chamber ensemble comprised of many of British Columbia’s most accomplished instrumentalists, their mandate is to present rarely heard concert music for a large-sized chamber ensemble, increasing the understanding and appreciation of music composed during the past hundred years, linking the music of earlier times to the music of today, promoting Canadian and international works through innovative programming and outstanding performance.

The ensemble has quickly established itself as a dynamic contributor to the Vancouver arts scene, with a growing national and international reputation through its recordings, broadcasts, tours, and interdisciplinary collaborations.

Owen Underhill is a composer, conductor and faculty member in the School for the Contemporary Arts at Simon Fraser University.  Owen, with Jeremy Berkman and other ensemble members, was one of the co-founders of the Turning Point Ensemble.  From 1987 – 2000, he was the Artistic Director of Vancouver New Music.  In addition to serving as the conductor of the TPE, Owen has conducted with groups such as the CBC Radio Orchestra, Vancouver Symphony, and the National Arts Centre Orchestra. Underhill has a special commitment to Canadian music and innovative interdisciplinary collaboration, and was honoured as one of 50 special ambassadors for Canadian music as part of the Canadian Music Centre’s 50th birthday celebrations.

As a composer, Underhill writes for diverse combinations including orchestra, voice and choir and music for dance.  His Canzone di Petra (2004), a piece for flute and harp commissioned by Heidi Krutzen and Lorna McGhee, was the winner of the Western Canadian Music Outstanding Composition Award.  In the fall of 2013, Owen was elected as a new fellow to the Academy of Arts of the Royal Society of Canada (RSC).