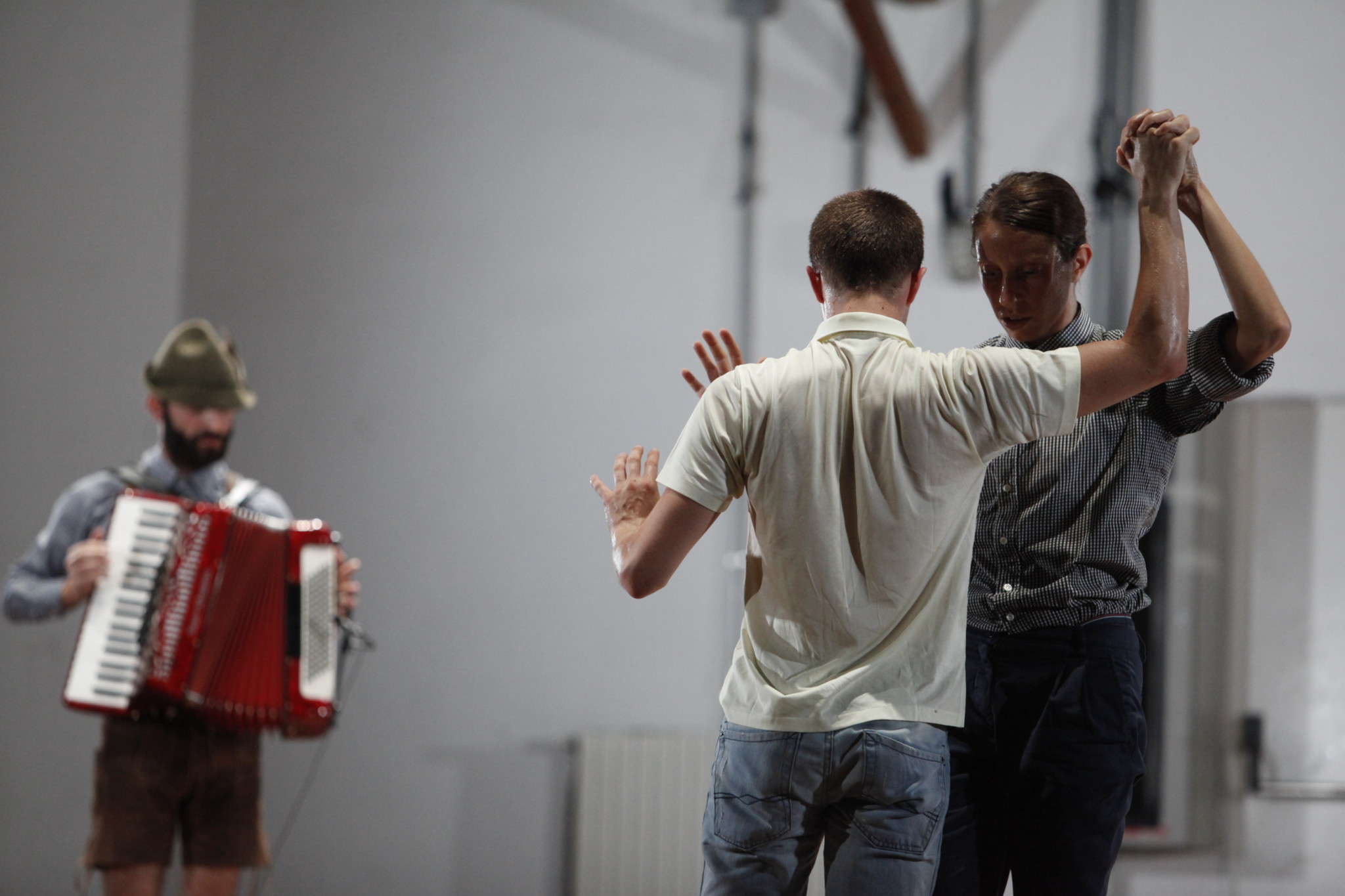 The PuSh International Performing Arts Festival (PuSh Festival) presents its 13th annual edition, taking place January 16 to February 5, 2017 at various Vancouver venues. Acclaimed artists representing 11 countries will descend on the city for the signature, three-week mid-winter event. From staggering spectacles to intimately immersive encounters, the 2017 PuSh Festival lineup showcases innovative, transformative art across a vast expanse of performance disciplines.“I am tempted to tell you that we are back again, with our perennial offerings: same time, same place, similar roster of shows, but that couldn’t be further from the truth,” says Norman Armour, Artistic & Executive Director of the PuSh International Performing Arts Festival. “This year’s Festival attests to art as an act of resistance and provocation, as parser of unease and discomfort, as unraveller of taboo. This year, we have gathered fearless, visionary creators from around the globe to ignite dialogue and exploration on a litany of pressing themes: inclusivity and isolation, memory and mental health, love and conflict, gender and sexuality, and more. These artists are society’s true leaders, showing us the way forward, while illuminating the past and interrogating the present.”

This year, the PuSh Festival is proud to again partner with caravan, an initiative to encourage England-based theatre makers to think and work internationally. Together with caravan, the PuSh Festival will present a suite of works and several PuSh Assembly events that spotlight England’s brightest artists. Through their partnership, the PuSh Festival and caravan have fostered successful collaborations between international and local companies, between local audiences and visiting artists, with the goal of expanding the practice and impact of the performing arts.

PuSh Passes and tickets for the 2017 PuSh Festival are on sale now at pushfestival.ca. Early Bird PuSh Passes start at $103.

Sweat Baby Sweat – Jan Martens (Belgium/Netherlands)
Presented with The Dance Centre
Supported by Performing Arts Fund Netherlands
Jan 18­–20 | Scotiabank Dance Centre
Romance and sexuality are distilled to their physical essence in this brilliant piece of dance between one man and one woman. Minimalist with maximum exertion, each new contortion between the couple brings added tension, their portrayal of love growing more profound.

By Heart – Tiago Rodrigues / Teatro Nacional D. Maria II (Portugal)
Supported by Consulate General of Portugal in Vancouver
Jan 19—21 | Performance Works
Inspired by George Steiner’s words, “Once 10 people know a poem by heart, there’s nothing the KGB, the CIA or the Gestapo can do about it,” distinguished playwright and actor Tiago Rodrigues teaches 10 audience members a poem. Rodrigues offers a personal, touching show about the power of art, not just to inform and inspire, but also to elude and fight oppression.

As I Lay Dying – Theatre Smith-Gilmour (Canada)
Presented with Arts Club Theatre Company
Jan 19–Feb 12 | Goldcorp Stage at the BMO Theatre Centre
William Faulkner’s classic novel of one family’s trek to lay its deceased matriarch to rest is adapted with remarkable innovation. With few props and no sets, these masters of physical theatre miraculously conjure another world through spectacular movement, lighting and sound.

Garden of Earthly Delights – Mere Phantoms (Canada)
Presented with grunt gallery & CSA Space
Jan 19–21 | CSA Space
Inspired by the Hieronymus Bosch painting of the same name, this immersive journey guides viewers with shadow projections and sound, moving from lush jungle to urban maze through a cityscape. This is illusionism at its finest—refined down to a beautiful binary of black and white.

Human Library – Stop the Violence (Denmark)
Presented with Zee Zee Theatre | Supported by Vancouver Public Library
Jan 21, 22, 28, 29; February 4 & 5 | Vancouver Public Library, Central Branch
Back by popular demand, the worldwide phenomenon and PuSh Festival favourite invites people to borrow a human book. Readers of this living literature will get a taste of other lives, perspectives and possibilities.

Portraits in Motion – Volker Gerling/Aurora Nova (Germany)
Presented with The Cultch
Jan 24–26 | York Theatre
An incandescent, flickering glimpse of human persona and essence. Striking portraits from photographic flipbooks are projected live onto the large screen. Charming stories behind each flipbook are recounted, bringing to life these frozen instances in time.

The City and the City – Upintheair Theatre & The Only Animal (Canada)
Presented with Upintheair Theatre & The Only Animal
Jan 24–29, 31; Feb 3–5 | Russian Hall
China Miéville’s award-winning tale of two fictional cities unfolds as spectator becomes participant in a murder mystery. Audience members are “cast” upon arrival and equipped with ear buds and transmitter to receive cues throughout the play to collectively crack the case.

Every Brilliant Thing – Paines Plough/Pentabus Theatre Company (England)
Presented with caravan
Supported by Arts Council England, British Council
Jan 26–29 | Performance Works
In this heartrending yet hopeful play about depression and the lengths we will go to for those we love, comedian and performer Jonny Donahoe—with the help of the audience—delivers a list of all things worth living for, starting with ice cream.

Backstage in Biscuit Land – Touretteshero (England)
Presented with caravan
Supported by Arts Council England, British Council and Vancity
Jan 30–Feb 1 | Roundhouse Community Arts & Recreation Centre
Jess Thom cannot stay on script. She involuntarily and repeatedly says “biscuit,” one of the verbal ticks of her Tourette syndrome. In this delightful and enlightening show, what society deems “atypical” allows Thom to soar with a hilarious and unhinged mix of improv, comedy and puppetry.

Mouthpiece – Quote Unquote Collective (Canada)
Presented with The Cultch
Jan 31–Feb 5 | Historic Theatre at The Cultch
Amy Nostbakken and Norah Sadava play two halves of the same woman: a person grieving the loss of her mother, while attempting to plan the funeral, all envisaged in a bathtub. The two halves overlap seamlessly, but also diverge, revealing a fractured conscious many will relate to.

Wallflower – Quarantine (England)
Presented with caravan
Supported by Arts Council England & British Council
Feb 1–3 | Performance Works
Evoking memories of awkward high school dances, private groove sessions, a romantic slow dance and much more, the performers of Wallflower endeavour to recall every dance they have ever danced. This is storytelling in action, autobiography emerging in movement and music.

FOLK-S, Will you still love me tomorrow? – Alessandro Sciarroni (Italy)
Presented with The Dance Centre & Il Centro Italian Cultural Centre
Feb 2–4 | Scotiabank Dance Centre
The schuhplattler is a Bavarian folk dance in which performers strike their shoes and legs; it’s ecstatic, kinetic, and one walloping workout. In this contemporary interpretation the dancers take the form to physical extremes, performing in various rhythms and configurations with inconceivable endurance.

CLUB PUSH SHOWS
Club PuSh at The Fox Cabaret features shows on Fridays and Saturdays in a less formal, less traditional space. These works by emerging and established artists are alive with the experimental spirit, pushing performance forms to new limits.

Club PuSh at The Fox Cabaret is also the social hub of the PuSh Festival where audiences can meet up with friends and colleagues—before and after shows, every night of the week—for drinks and music from guest DJs and featured curators.

Point Blank Poets (England)
Presented with caravan
Supported by Arts Council England & British Council
Jan 27
Five preeminent spoken word artists with published books, plays and millions of YouTube views tackle the political, the personal and every point in between with burning passion and precision in their Canadian premiere.

Lido Pimienta (Canada)
Feb 4
Colombian-born, Toronto-based musician Lido Pimienta has shared the stage with such stars as Tanya Tagaq and A Tribe Called Red. In a night of music for a revolution, she offers a tribute to nature and the de-colonized spirit at the intersection of ethnicity, gender and nationality.

PUSH ASSEMBLY
The PuSh Assembly is an open invitation to industry insiders and arts aficionados alike, to gather to connect and share ideas and perspectives around the performing arts. The 2017 PuSh Assembly is designed in two series: Ideas (free and open to the public) and Industry (accessible with a PuSh Industry Pass). The PuSh Assembly events engage audiences and industry professionals with the Festival artists through artist talks, a dialogue series and networking opportunities.

PUSH PASSES
PuSh Passes are the best way to experience the PuSh Festival. Pass holders save up to 30% off single tickets. PuSh Passes are flexible so Passholders can book tickets and make exchanges online at anytime. Limited quantities.

PUSH SHOW PACKS
Show Packs are a great introduction to PuSh, and provide a carefully curated sampling of our cutting-edge shows that span different forms and practices, by artists from different countries.  Audiences can enjoy three unique shows—one show per week, on a pre-set day.

MORE INFORMATION
Pick up the comprehensive 64–page 2017 program guide at any location of JJ Bean, Choices Markets and other select locations. You can also reach us at: pushfestival.ca, info@nullpushfestival.ca or 604.605.8284.