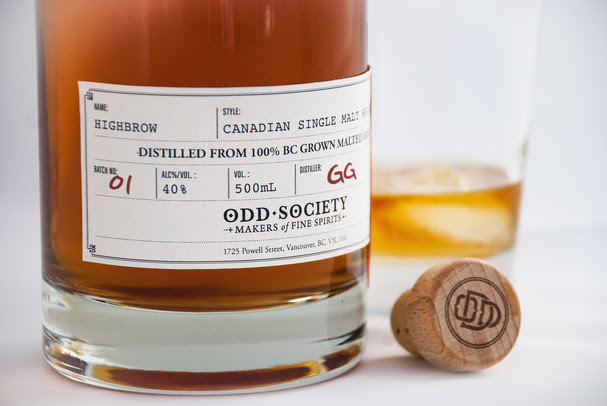 Since opening in 2013, Odd Society Spirits has made a name for itself with its Wallflower Gin and East Van Vodka but whisky has always been a priority for this micro-distillery, regularly barreling small batches from day one. The debut single malt whisky was the first whisky barreled back when they began and after three years of the required aging it’s finally ready. “We feel like proud parents,” says Gordon Glanz, Odd Society Spirits Owner and Distiller. “This is the day we have been dreaming of since my wife and I decided to take the leap—our whisky has finally matured and is ready for its debut.”

Single malt was just the beginning, as rye is soon to follow. In 2014 Odd Society also started a cask program allowing the public to own a private 30L cask and follow the aging process for three years, until it is ready to be bottled and take home. Fans of Glanz’s curious approach to spirits will be intrigued by his use of new oak for aging rye, and his experimentation with smoked malt and maple syrup barrels for upcoming limited releases.

Only two small barrels of the Odd Society Spirits first edition single malt whisky were produced and bottled. Subtle notes of vanilla grounded in plum, black currants, and tobacco are wrapped in burnt sugar and spiked with delicate pink peppercorn flavours in this special preview of things to come. Batch #1 Single Malt Whisky is sold in 500ml bottles priced at $50 exclusively at the distillery starting December 18. With a mere 120 bottles available and a one bottle per person limit, connoisseurs are advised to arrive when doors open at 1pm.