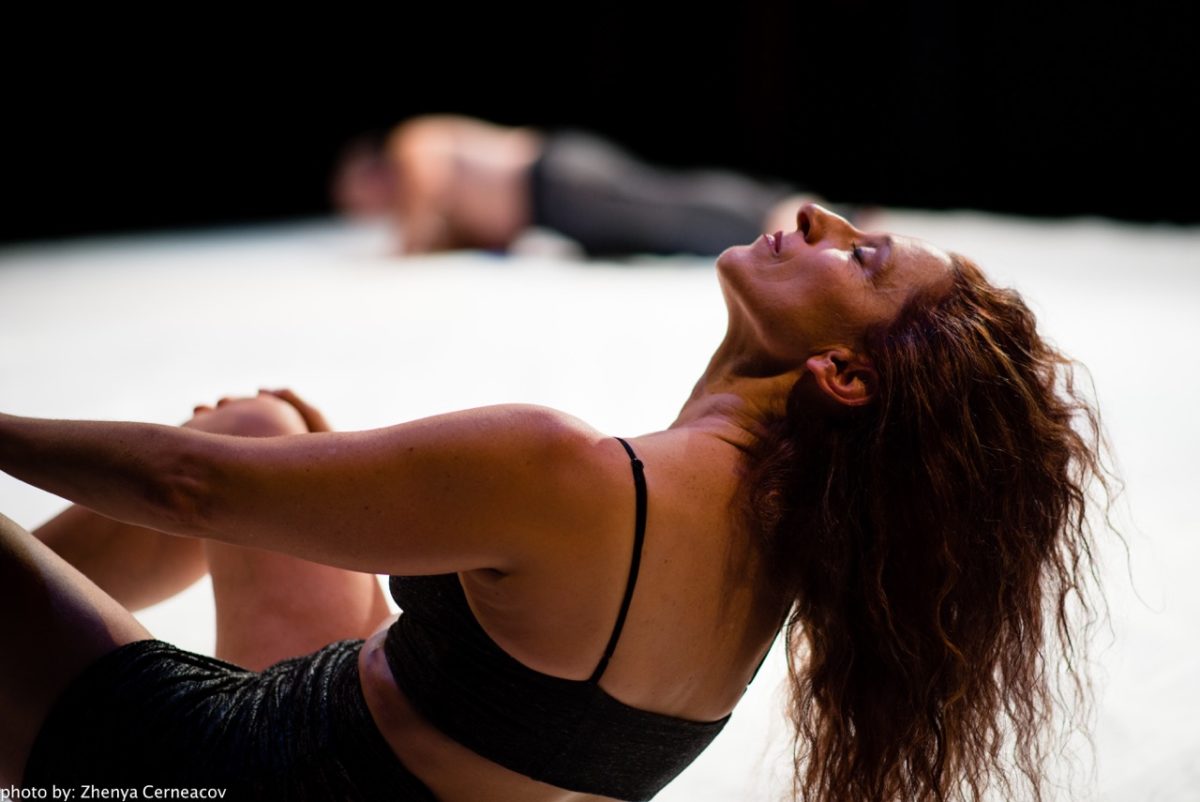 Kaeja D’Dance is performing “lifeDUETS” at the roundhouse Performance Centre., taking place from March 9-11.  The troupe is a husband and wife duo, Karen and Allen Kaeja, with a familiarity with one another’s bodies and energy that reveals itself in the routines.  The show is made up of two parts.  The first  named “With” is choreographed by Benjamin Kamino.  It opens with the couple in an intimate embrace within the background of a simple set; a stage with a cloth tarp and low lighting. A choir provides the soundscape.  Both wear sparse clothing which gives a rawness to the piece.  They use the expansive stage fully and assess themselves from across the edges.  The two continually trade places, thus becoming one another.   Humour is not lost in the seriousness of the piece.  Karen lets out monkey noises and Allen laughs wholeheartedly.  At one point she hides underneath the floor tarp.  His entry is more laborious; he has to remove tape from the stage so that he can go underneath and join her.  Together they roll as their bodies take on shapes, making the tarp swell hypnotically and billow.  It is a beautiful image. After chasing the other they become one as he carries her, and, according to Kamino, “forever already broken,” across the stage and into a new threshold.

The second part called “25 to 1” is choreographed by Tedd Robinson. It opens with Karen and Allen kissing deeply.  This is a quirky piece that has a romantic quality.  While smiling and walking hand in hand they bring out a duffel bag and slowly pitch a tent.  As they enter it the musical narrative repeats the words, “I want you, I need you.”  The duo take off their shoes together, smiling all the while.  They roll up the tent so that we can’t see them entirely and then reveal their limbs from the inside; a leg poking out.  They touch body parts.  Getting out of  the tent one bears the other’s shoes on their back and crawls around on hands and knees. The use of the tent reveals how site specific their work is.  Eventually they wear their shoes again and Allen sits on Karen, replacing the footwear.  He seems deep in thought.  They do a series of lifts and then Karen takes his place and sits on him.  They carry each other’s weight.  Getting up both dance without touching, disjointed and ever longing for the other without the promise of completeness.  They take turns counting down from 25 to 1.   Hence the name of the piece.  Each represents a lift in the tent.  At 1 they come out, embrace, and kiss, in what appears to be an acceptance of their differences.

The 17th edition of the Vancouver International Dance Festival (VIDF) is on until March 25th a various venues.  Call the box office: 604-662-4966 for queries and to buy tickets.

The “not to miss” performances of the Vancouver International Dance Festival