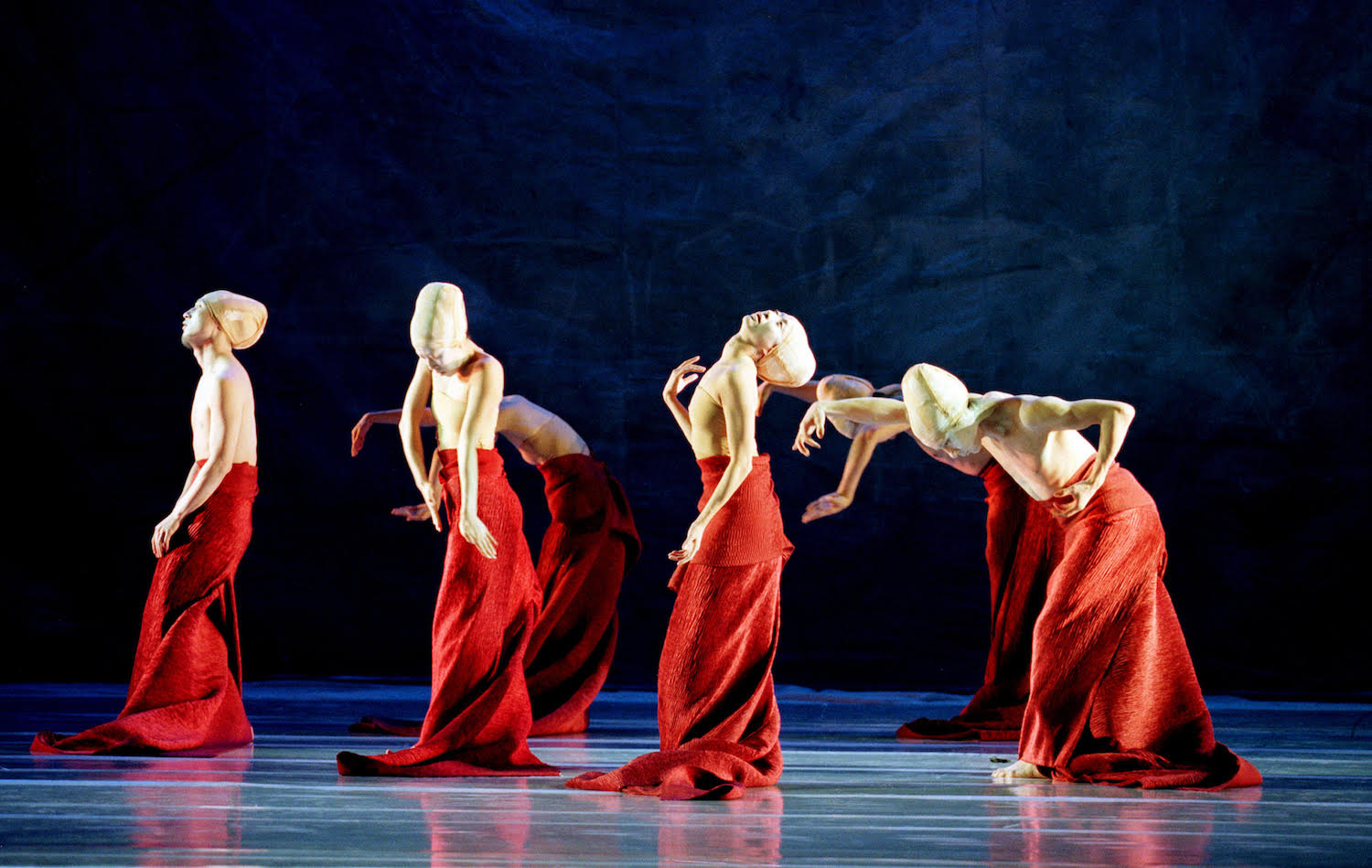 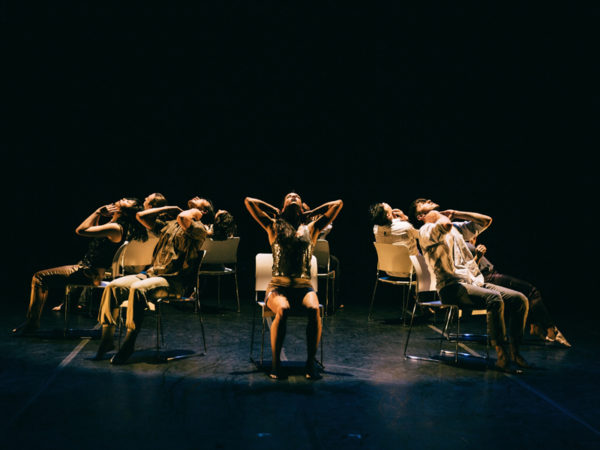 “Dance as a primal human instinct transcends language, cultural norms, and international borders. It has the potential to communicate any aspect of the human experience,” says Barbara Bourget, Co-Producer of VIDF. “In the current international climate of parochialism and division, it is more important than ever to connect with individuals from around the globe in a spirit of inclusion, connection, dialogue, and empathy. This year’s festival hopes to achieve this goal by bringing communities together though the presentation of innovative, thought-provoking, and breathtaking work of world class artists from the United States, Mexico, and Hungary, as well as trailblazing artists from Vancouver and Montreal.”

Folding, an otherworldly dreamscape set to Tibetan Buddhist chanting melded with the ethereal melodies of John Tavener, is a work of captivating simplicity and control that showcases Shen Wei’s genius. Rite of Spring is a compelling abstract interpretation of a two-piano version of Stravinsky’s iconic score, creating a fascinating physical calligraphy. The dancers spiral and swirl across the stage with an exuberance and lyricism that celebrates the dancers’ athleticism and exhilarating artistry.

Amber Funk Barton / the response.
VAST
Scotiabank Dance Centre, March 1 & 2, 8pm  March 3, 2pm & 8pm
As part of VIDF and the response.’s 10th Anniversary season, Vancouver’s own Amber Funk Barton performs her first full-length solo in the world premiere of VAST. The rhythm of the body is relentless and its relationship to the universe is constant. The properties found in our blood and bones are also present in the stars. Inspired by personal travels and universal space, VAST is an ode to the explorer that resides in all of us and represents the traveler and the dreamer who wonders what resides beyond the edge. Amber Funk Barton endeavors to create a performance experience that is both personal yet universal, using the medium of dance to celebrate the uncertainty and duality of human life that is both powerless and mighty.

Dancers Dancing (Vancouver)
Confabulation
Roundhouse Exhibition Hall, March 8 to 10, 7pm
Confabulation is inspired by memory and lives well lived. Choreographed by Judith Garay and performed by Jane Osborne, Bevin Poole and Garay, the piece adheres to the Tennessee Williams quote that “…life is all memory, except for the present moment…” Threads of thought and memory ferment inside the work, filled with struggle, tenacity and joy. Confabulation lives on the edges of mind and memory – looking back to see tomorrow and yesterday. It is grounded in uncertainty and the belief that false memories and imagination are an ineluctable aspect of our past and bring multiple dimensions to our present.

Hindsight is a seminal work originally created in 1995, and reveals Bingham’s evolution as a choreographer. Loaded with imagery of sadness and longing, dancers Kelly McInnes and Olivia Shaffer are like birds that have forgotten how to fly as each movement evokes a sense of heartache and loss.

Originally commissioned by Ziyian Kwan in 2002, Sinking SuZi was reworked in 2009 and will see its third incarnation at this year’s festival. Kwan will perform in this sparse and elegant study of physical presence, which speaks to the evolving mentorship between Bingham and Kwan: teacher to student, choreographer to interprète and most recently, artist to artist.

Goh Ballet (Vancouver)
Selections from Paquita, Persuit, Pas de Trois from Swan Lake,
Four Little Swans from Swan Lake, Winter from The Four Seasons, and The Bureau
Roundhouse Exhibition Hall, March 15 to 17, 7pm
With a wide-ranging and ever-expanding repertoire that encompasses classical and contemporary ballet, jazz, character, and national dance, the Goh Ballet enjoys international acclaim. The company’s performance at VIDF will include a diverse evening of dance featuring classical selections from Paquita and Swan Lake staged by Olga Iakovlevskaya and Yao Ping Zhu. Contemporary selections include Persuit choreographed by Monica Proenca; Winter from The Four Seasons choreographed by Adonis Daukaev; and The Bureau choreographed by Monica Proenca.

White Wave Dance Company (New York)
iyouuswe
Roundhouse Performance Centre, March 15 to 17, 8pm
VIDF is pleased to present the Canadian premiere of White Wave Dance’s iyouuswe. Born from an exciting collaboration between WHITE WAVE’s artistic director, Young Soon Kim, and its nine dazzling dancers, iyouuswe has been hailed by Backstage as “an extremely well crafted, visually stunning, and emotionally rich work.” Scored to original music by long time collaborator Ki Young, this uninterrupted 65-minute journey will challenge audiences to examine who we are and how we relate to ourselves, and to each other. It is a story about developing meaningful relationships where we struggle to seek a sense of ‘i’ as part of a ‘we’.

Ferenc Fehér (Hungary)
IMAGO
Roundhouse Exhibition Hall, March 20 to 21, 7pm
Choreographed, composed and performed by Ferenc Fehér, the Canadian premiere of IMAGO is an award winning tour-de-force that investigates questions of masculinity and emotion. Fehér’s signature combination of freestyle dance, animal movements, and contemporary dance create an engrossing experience of primal vulnerability and raw emotion. IMAGO was featured in the 19th Contemporary Dance Festival in Veszprém, Hungary where Fehér was presented with the Special Award. He also received the Special Mention of the Jury Prize in Choreography at the 2017 Masdanza International Contemporary Dance Festival of The Canary Islands for another work entitled The Station.

Lucie Grégoire Danse (Montreal)
Les Choses dernières
Roundhouse Performance Centre, March 20 to 22, 8pm
Lucie Grégoire presents the West Coast premiere of Les Choses dernières, an emotional work freely inspired by Paul Auster’s novel In the Country of Last Things, which enjoyed its world premiere at l’Agora de la danse in 1994. Acclaimed dancer Isabelle Poirier performs in this remount and becomes a woman emerging from the night, as if from a hidden, obscure territory. Her gestures promise to scrutinize time; her body is ever poised to flee, to the point of transparency. In ‘the country of last things’ where everything is disintegrating, she keeps wandering, impelled by the urgency of survival. Lighting by Alain Lortie and music by Robert M. Lepage will enhance this work, enveloping the stage in a cinematic aura filled with a veiled, yet inflamed sensuality.

The Biting School (Vancouver)
Disagreable Tales
Roundhouse Exhibition Hall, March 22 to 24, 7pm
Co-founded in 2015 by multi-disciplinary artists and brothers Arash and Aryo Khakpour, The Biting School specializes in dance, theatre, and performance art that explores social dynamics, historical roots, and political issues on a physical and visceral level. Inspired by a compilation of Christian moral tales written by Leon Bloy, Disagreeable Tales is an exploration of the violence, cruelty, and perversions in and around us. The piece raises the following questions: Where in our bodies does the sensation of this history of violence lie? What are the possible ways we could face this violence in order to acknowledge it? Perhaps in this acknowledgment maybe we find a moment of vague solidarity.

pataSola dance (Vancouver)
RIFT
KW Production Studio, March 22 to 24, 5pm
In this compelling world premiere, pataSola dance mixes elements of Flamenco and Butoh with archetype, myth, and legend in response to global femicide. RIFT bears witness to the deep pain of women everywhere who address the loss and harm of gender violence in order to restore awareness and advocate for change. Inspired by the power of Butoh and the Cante Hondo (deep song) in flamenco, this work explores the lament and struggle associated with the search for collective renewal.

Tickets and event details at vidf.ca

About Vancouver International Dance Festival (vidf.ca):
The Vancouver International Dance Festival (VIDF) is a social-profit, artist-run organization dedicated to supporting and furthering the art of culturally diverse contemporary dance.
Each year the Festival scours the globe, and its own backyard, to assemble a month of emotionally rich and intellectually stimulating dance expressions. In doing so, the Festival functions as an important link between Vancouver and a vibrant, international community of artists, ensuring world-class contemporary dance will always have a place in the hearts and minds of Vancouver audiences.