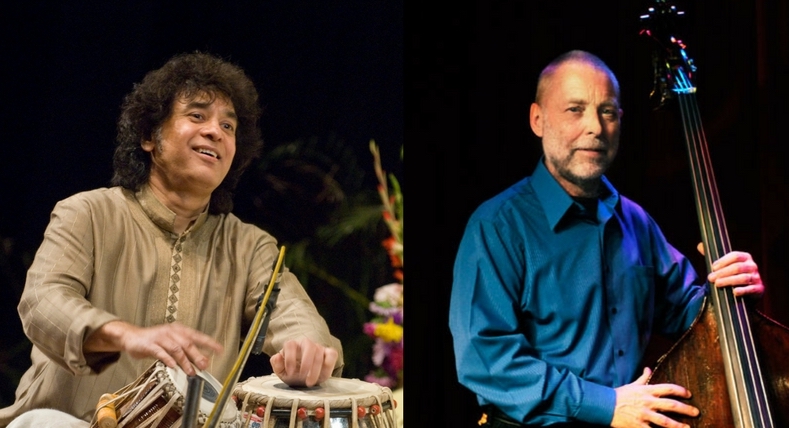 The Chan Centre for the Performing Arts at the University of British Columbia (UBC) presents Crosscurrents, a collaboration by virtuoso musicians Zakir Hussain and Dave Holland on October 28 at 8pm in the Chan Shun Concert Hall. Hussain, the world’s foremost tabla master, joins forces with Holland – bandleader, composer, and 2017 NEA Jazz Master bassist – alongside a stellar quintet including saxophonist Chris Potter and vocalist Shankar Mahadevan. Together, the ensemble will explore the fascinating artistic intersections between jazz and Indian music, and bridge two genres seemingly worlds apart.

“We look forward to welcoming back audience favourite Zakir Hussain, and presenting Dave Holland for the first time,” says Joyce Hinton, Co-Managing Director of the Chan Centre. “These two are such brilliant and inspiring artists in their own right. Having the opportunity to host a ‘meeting of the minds’ between them is really an honour. There is a lot of shared ground between jazz and the music of India, which lays the groundwork for exciting musical experimentation.”

The Chicago Tribune has said, “If there is such a thing as a tabla superstar, Indian virtuoso Zakir Hussain is it.” Hussain is internationally lauded as a leading percussionist, accomplished composer, a respected educator, and is considered a chief architect of the contemporary world music movement. A revered tabla artist, his playing is distinguished by its exceptional musicality and dexterity, rooted in a disciplined technical study. Hussain’s performances have elevated the profile of the tabla in India and abroad.

A child prodigy, Hussain began touring the world by the age of twelve. Not long after he engaged in many collaborations, including with Yo-Yo Ma, George Harrison, Bela Fleck, Van Morrison, Edgar Meyer, and other well-known artists. As a composer, Hussain has scored numerous films by such directors as Merchant-Ivory and Bernardo Bertolucci, and he recently premiered his third concerto, Peshkar –  the first-ever for tabla and orchestra –  in April 2017 with the National Symphony Orchestra at the Kennedy Center. Hussain is the recipient of countless awards and honours, including multiple GRAMMY awards and the National Heritage Fellowship.

A scholar of tone and rhythm, bassist, composer, and bandleader Dave Holland is now in his fifth decade as a performer. Hailed as “One of the most sophisticated composers and arrangers in the jazz world” by the Boston Globe, Holland has evolved and expanded his art while constantly honing his distinctive voice. Since his debut in the mid-1960s with Miles Davis’ legendary Bitches Brew band, that voice has been heard with Spanish guitar legend Pepe Habichuela, accompanying the great vocalist Betty Carter in her last years, alongside Chick Corea in the avant-garde quartet Circle, and with legends Stan Getz, Hank Jones, and Herbie Hancock. Holland is also a distinguished mentor to today’s leading players such as Chris Potter, Kevin and Robin Eubanks, and Steve Coleman. A known figure in the history of modern jazz, Holland continues to defy expectation and push creative boundaries.

Performing as part of Crosscurrents will be New York’s acclaimed saxophonist Chris Potter. A GRAMMY-nominated soloist named “One of the most studied (and copied) saxophonists on the planet”  by DownBeat magazine,  Potter’s impressive discography includes 15 albums as a leader and more than 100 albums as a sideman. Alongside Potter will be Shankar Mahadevan. Considered among the greatest Indian vocalists performing today, and known as the voice of “every Tamil hero”, Mahadevan is also one of Bollywood’s most illustrious film composers.

Crosscurrents will also feature Louiz Banks (keyboards), nicknamed the “Godfather of Indian Jazz” who can be heard on the GRAMMY-nominated album Miles from India (2008); self-taught virtuoso Sanjay Divecha (guitar) who spent 15 years touring with such stars as Angelique Kidjo and Carlos Santana, and Gino Banks (drums) who has played with classical greats Pandit Shivkumar Sharma, Ustad Rashid Khan, among others.

A series of ancillary events programmed in conjunction with Chan Centre performances, exploring the role of arts and artists in society.

Since 1997, the Chan Centre for the Performing Arts in UBC’s Arts & Culture District has earned an international reputation for its striking design, stellar acoustics, and exceptional programming. Artists, critics, and patrons alike are unanimous in their praise of the facility, winning it a place among North America’s pre­­­­mier performing arts venues. The Chan Centre boasts three unique venues: the superb Chan Shun Concert Hall, the dramatic Telus Studio Theatre, and the intimate Royal Bank Cinema. From classical, jazz, theatre, and opera to world music, the Chan Centre is a vital part of UBC campus life were artistic and academic disciplines merge to inspire new perspectives on life and culture. Past performers and guest speakers include Wynton Marsalis, His Holiness the Dalai Lama, Renée Fleming, Dan Savage, Yo-Yo Ma, Buena Vista Social Club, Sigur Rós, Mavis Staples, Anoushka Shankar, Trombone Shorty, Chick Corea and Herbie Hancock. This season the Chan Centre is celebrating two decades of world class performance. Visit their 20th anniversary archives at chancentre.com for memorable stories and never-before-seen photos from the past twenty years.