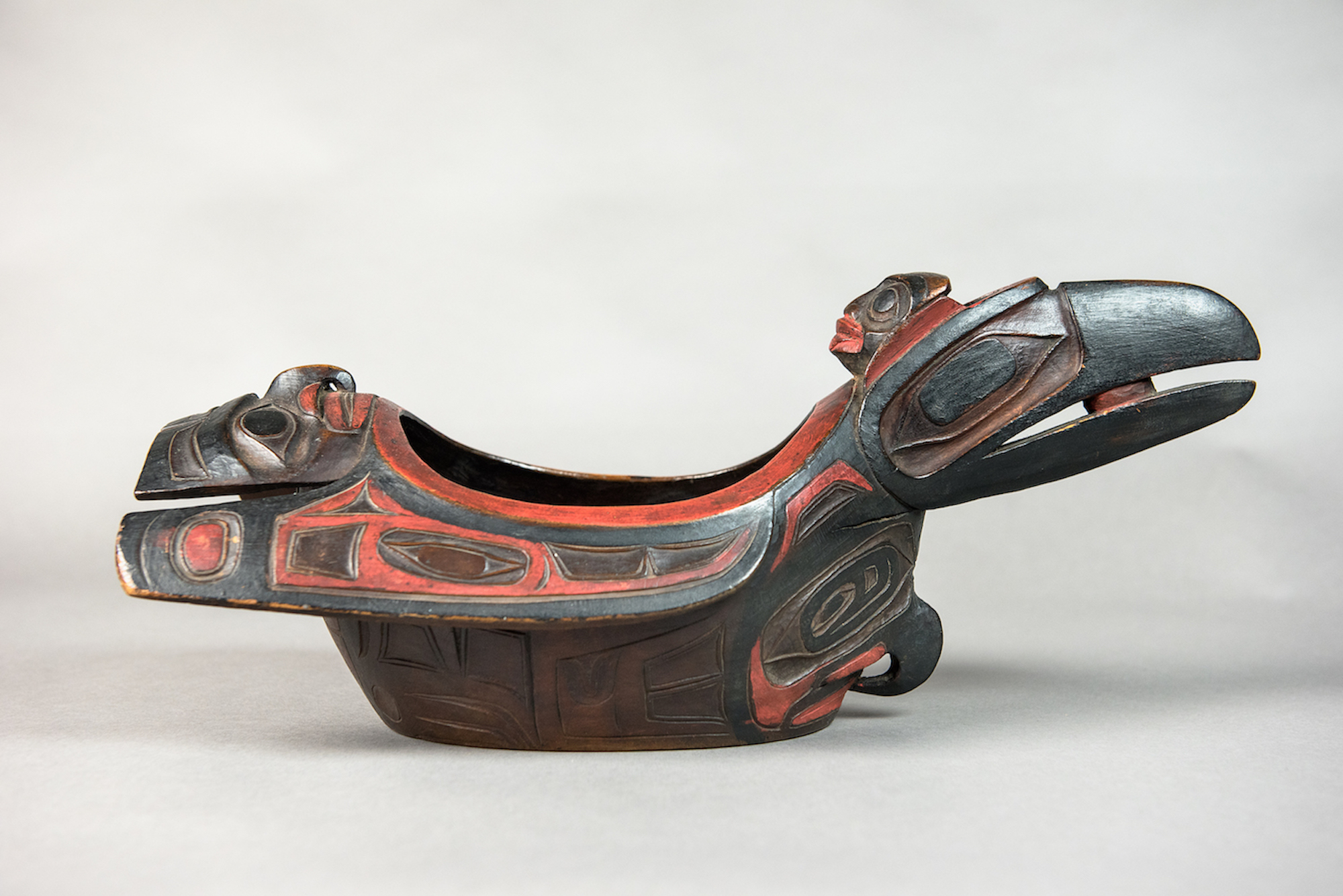 Deep Cultural Understandings Emerge as Haida Offer Interpretation of their Treasures
The Museum of Vancouver (MOV) presents a visual feast of innovation and tradition with Haida Now, a collaborative exhibition featuring an unparalleled collection of Haida art, on display from March 16, 2018 to June 15, 2019. Guest curated by Haida Curator Kwiaahwah Jones in collaboration with Viviane Gosselin, Co-curator and Director of Collections & Exhibitions at MOV, the exhibition will feature more than 450 works by carvers, weavers, photographers and print makers, collected as early as the 1890s. An impressive group of local Haida Artists will share their insights and knowledge about the collection, providing visitors with the opportunity to experience a new, powerful way to engage with the worldview and sensibility of the Haida people while gaining greater appreciation for the role museums can play in the reconciliation movement.

The Haida Gwaii Museum in Skidegate is a partner in the project with its new director, Nika Collison, playing an advisory role in regards to exhibition content and protocol.

“Through this exhibition, the Haida have been presented with the opportunity to share our sophisticated knowledge through our art and culture” says Kwiaahwah Jones, Guest Curator of Haida Now. “Haida Now is a glimpse into the Haida Nation’s artistic and cultural legacy that we continue to write. These are the stories we can use to help build better relationships for the future, and create a greater cross-cultural understanding between Indigenous and non-Indigenous people.”

The exhibition is organized into meaningful groupings of works that highlight the interconnection between art, language, land, spirituality, resilience, and life in the city. Haida Now elegantly displays over 450 works from the extensive Haida collection at MOV including woven baskets, intricate carvings, masks, headpieces, and jewellery. Large portraits of the Haida in Haida Gwaii and Vancouver are featured with compelling soundscapes, short films, and interactive displays to offer a vivid sense of the vibrancy of the culture.

For the past two years, Haida artists and knowledge holders have visited the vaults at MOV, and have helped the curatorial team with the process of documenting these artworks. “We are so thankful to these artists for their generosity and willingness to share their knowledge and infectious excitement about their culture,” says Viviane Gosselin, Co-Curator and Director of Collections & Exhibitions at MOV. “Their insight gives new meaning to this impressive collection of Haida art. Remarkable in its quality and scope, the collection has only been partially exhibited a few times over the last 80 years; we look forward to making these treasures more accessible to the public.”

An estimated one fifth of the Haida population—many of them artists—reside in Greater Vancouver, situated on the traditional territories of the Musqueam, Skwxwú7mesh and Tsleil-Waututh. For this reason, Haida Now also acknowledges the Haida peoples’ long-standing relationship with Coast Salish people by providing an early history of conflict that gave way to commerce, and more recently to artistic and political settlement and international coalitions.

To complement the exhibition, MOV is pleased to offer a host of public programs to further elaborate on themes of the exhibition and facilitate public conversation about the role of museums and Canadians in the reconciliation movement. The Repatriation Monologues will be a series of panel discussions on repatriation, the complex process undertaken by museums and Indigenous artists and communities to return items from museum collections to their communities of origin.

For more information about Haida Now and special programs in support of this exhibition, visit museumofvancouver.ca.

Institutional Partners: City of Vancouver, BC Arts Council, and the Province of British Columbia

HAIDA NOW new exhibition at the Museum of Vancouver

White Ravens: A Legacy of Resistance

Museum of Vancouver Invites Urbanites to Reflect on the Environment with – Wild Things: The Power of Nature in Our Lives –

Museum of Vancouver Invites Urbanites to Reflect on the Environment with – Wild Things: The Power of Nature in Our Lives –