Bard on the Beach announces the return of its annual Young Shakespeareans Summer Theatre Camps and Teen Workshops, with sessions beginning July 3 and running through to August 31, 2018. Registration is now open for the programs, which allow children and teens from ages 8 to 18 to receive coaching by professional actors from Bard on the Beach, and perform some of Shakespeare’s most beloved works on the iconic stage under the white tents in Vanier Park. One of the theatre company’s key education initiatives for more than two decades, this season Young Shakespeareans will grow and expand to include full-day options that take participants beyond the world of performance and into production. 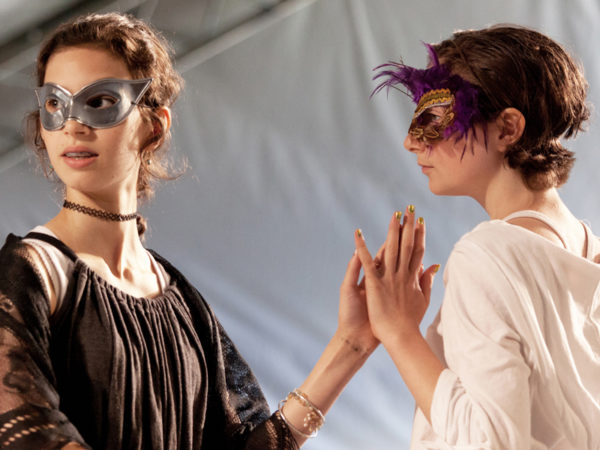 “Shakespeare’s words are read and analyzed in English classrooms around the world, but we often forget a simple fact: These plays were never meant to be studied.” says Mary Hartman, Director of Education. “With Young Shakespeareans we actively and imaginatively introduce growing minds to these plays, giving young people the tools to make these timeless tales their own through performance. It is endlessly inspiring to see the perspective that new generations bring to these stories, and that more than 400 years later, Shakespeare continues to shed light on our lives.”

The full scope of the Young Shakespeareans Summer Camps and Workshops consists of 16 distinct sessions, most of which are half-day sessions running for two weeks. Each workshop caters to a specific age group (8 to 13 or 13 to 18 year olds) and is centred around one of Shakespeare’s most beloved plays (among 2018 options are Hamlet, Romeo and Juliet, Julius Caesar, A Midsummer Night’s Dream, and more). Two intensive workshops are offered for full-day sessions for a single week, for 11-14 and 15-18 year olds.

Over the course of the workshop, professional actors from Bard’s company will help participants bring Shakespeare’s words to life through coaching in voice, movement and dialogue, and with activities designed to boost confidence and foster collaborative relationships. Each session culminates with the opportunity for the young thespians to share their work on Bard on the Beach’s Vanier Park stages.

New for 2018, the traditional two-week, half-day program will expand to include full-day options. Following a morning of learning and rehearsing, participants can choose to stay for the afternoons, going ‘behind-the-scenes’ to learn about the broader workings of a theatre production. These special activities will include explorations of prop and wardrobes, tours of technical facilities, and special visits and activities with guest Festival staff.

More than simply developing artistic talent and an appreciation of Shakespeare’s work, the summer camps are dedicated to inspiring and nurturing confidence, creativity, and positive social relationships amongst its youth participants. In more than two decades, the program has contributed to the development of thousands of young minds, including luminary Bard alumni such as Christine Quintana, Rachel Cairns, and Kayla Deorksen.

Young Shakespeareans is the flagship program of Bard Education, an arm of the theatre organization dedicated to inspiring the Lower Mainland community through dynamic, engaging experiences with the language, characters, and plays of William Shakespeare. In addition to the summer programming, its year-round operations include performance workshops for adult Shakespeare enthusiasts; community partnerships that bring free programming to disadvantaged neighbourhoods; paid post-secondary internships; classroom programming; teacher training; and more.

About Bard on the Beach Shakespeare Festival (bardonthebeach.org)
Celebrating its 29th season in 2018, Bard on the Beach is one of Canada’s largest not-for-profit, professional Shakespeare festivals. It is presented on the waterfront in Kitsilano’s Vanier Park, adjacent to Vancouver’s downtown core. Bard on the Beach offers Shakespeare plays, related dramas, and popular special events in two performance tents every June through September. In 2017, attendance was over 100,000 and more than 1.6 million patrons have experienced Bard since its inception. This year’s Festival dates are June 6 to September 22, 2018, and the lineup includes As You Like It, Macbeth, Timon of Athens and a new Bard-commissioned adaptation of the Greek classic Lysistrata.

Macbeth opens the 29th season of Bard on the Beach

Bard on the Beach – A Winter’s Tale review